Review: Nomad Launches 'Base One' Official MagSafe Charger for $130

Nomad today announced the launch of the Base One, its first official MagSafe wireless charger. For a long time, Belkin has had the only official ‌MagSafe‌ charging options, but that's starting to change now that third-party accessory companies are able to get Apple's Made for iPhone-certified hardware. 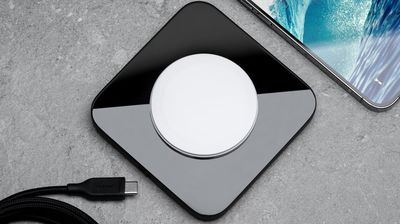 The Base One is using ‌MagSafe‌ components sourced directly from Apple, so it is able to charge a MagSafe-compatible iPhone at up to 15W (except for the iPhone 12 mini and iPhone 13 mini, which max out at 12W). Non-MagSafe magnetic charging options are limited to 7.5W, much like any other Qi charger.


At 15W, the Base One can charge at the same speed as Apple's official ‌MagSafe‌ Charger, so what Nomad is bringing to the table is it own spin on design. The Base One is priced at $130, so it's $90 more expensive than the ‌MagSafe‌ Charger, making it a premium option. It's worth noting that some of that cost comes from Apple's own hardware fees, as this is using ‌MagSafe‌ technology sourced from Apple.

The Base One has a shiny glass surface and a heavy aluminum body that you can get in either silver or gray. It undoubtedly feels like a high-quality product, weighing in at 515 grams, which is more than a pound. On top of the glass surface, there's the soft-coated ‌MagSafe‌ charger, and a set of feet on the bottom lift it up slightly and add protection for whatever surface it's placed on.

You might think that at the heavier weight it would able to remain on the desk without lifting when you want to pull your ‌iPhone‌ off the charger, but magnets are strong and that's not the case. You need to do the same tilt lift or lift with a finger under the ‌iPhone‌ that you need to do with other ‌MagSafe‌ charging options. The glass surface does collect some fingerprints and dust, but it's easy to clean off.

According to Nomad, the Base One is designed to look great on a desk, which it does, but at this price point it's as expensive as multi-device chargers from Belkin, Mophie, and others, so it may not be worth the high cost for some users. The Base One is a single-device charger, so it only works with one ‌iPhone‌ at a time.

It can be used to charge any MagSafe-compatible ‌iPhone‌ at the supported wireless charging speed, plus it can also charge AirPods or an older non-MagSafe ‌iPhone‌, though the magnets won't work. It connects over USB-C and comes with a braided USB-C cable, but there is no power adapter included so you'll need to supply your own 30W+ charger.

The Base One for Nomad will likely appeal to those who want a high quality charging accessory for their ‌iPhone‌, but at $90 more than a $40 ‌MagSafe‌ Charger, I find it hard to justify the price.

Yes, it looks nice on a desk, it's more attractive than a plain ‌MagSafe‌ Charger, and the USB-C connectivity is great, but for that kind of money, I'd rather shell out for a more versatile multi-device charger.

The Base One can be purchased from the Nomad website for $130.

SDJim
Yeah, your bottom line pretty much sums it up. This makes Belkin pricing look sane.
Score: 22 Votes (Like | Disagree)

Cheruman
Picking up a few of these. And then putting them down again because I’m poor
Score: 11 Votes (Like | Disagree)

boss.king
$130 and they don’t even bother to include the power brick? Even if money was no object, I think I’d still feel ripped off buying this.
Score: 9 Votes (Like | Disagree)

iStorm
Um, yeah... I think I would rather pop in my own official MagSafe charger into this for $13:

Elago's even has a reusable adhesive bottom, so it stays on your desk rather than sticking to your phone when you pick it up.
Score: 9 Votes (Like | Disagree)

Since that's hardware from Apple, they don't have control over it. Similar to the official Apple Watch charging pucks, which are typically always white.

So then it's just a black square around a pre-existing MagSafe charger?

topgunn
I get the desire for a premium product. I spent $50 more for Apple's premium watch charging "dock" over the standard issue Apple Watch charging cable. But this? This is ridiculously priced and doesn't even have a premium vibe. I would go so far as to see it looks cheap.
Score: 7 Votes (Like | Disagree)
Read All Comments

17 hours ago by Joe Rossignol