iOS 14.5 is now available, and a key new feature is the ability to unlock an iPhone with Face ID while wearing a mask, so long as you are wearing an Apple Watch. Read on to learn how this feature works. 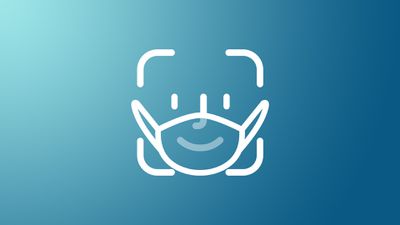 Apple introduced its ‌Face ID‌ facial recognition system in November 2017 with the launch of the ‌iPhone‌ X, offering users an even simpler way to unlock their smartphone than traditional fingerprint recognition.

Following the now-mainstream usage of face masks, however, Apple's biometric feature has been handicapped, leaving many users having to enter their passcode to unlock their device when in public spaces.

Fortunately, Apple has responded to this change in our everyday lives by introducing a new feature that allows ‌iPhone‌ users wearing an Apple Watch to unlock their smartphone via ‌Face ID‌ through a partial face scan, when they're wearing a mask.

The process is similar to how it works when unlocking a Mac with an Apple Watch. When the unlock happens, the user receives a haptic buzz and a notification on the Apple Watch informing them that the unlocking procedure has been successful. However, bear in mind that you can only use your Apple Watch to unlock your ‌iPhone‌ while wearing a mask – it can't be used for authenticating Apple Pay or App Store purchases.

How to Set Up Unlock iPhone With Apple Watch

How to Unlock Your iPhone With Apple Watch

To use your Apple Watch to unlock your ‌iPhone‌, your watch needs to be nearby, on your wrist, unlocked, and protected by a passcode. If you haven't set up a passcode yet, launch the Watch app on your ‌iPhone‌, select Passcode -> Turn Passcode On, then enter the passcode you want to use (you'll have to do so twice to confirm.)

alexandr
i will be wearing a mask around the house today just to take advantage of this feature!
Score: 25 Votes (Like | Disagree)

I feel like Apple is penalizing people who don’t have or can’t afford an Apple Watch, especially during a pandemic.

no, they are making life a bit easier for those who own one.
Score: 15 Votes (Like | Disagree)

DekuBleep
Omg I love unlocking my phone with my Apple Watch while I am wearing a mask so much.
Score: 12 Votes (Like | Disagree)

Toratek
The very best feature of this, for me, is that it works with a full-face motorcycle helmet. That makes long-term value of the feature really relevant to me- because sooner or later we won’t be wearing masks anymore, if sanity prevails at the current vaccination rate (at least in the USA).

Before this I would have to either remove my armored gloves and punch in the code, or remove my helmet and balaclava. This is MUCH better.
Score: 9 Votes (Like | Disagree)

How to Watch the 2022 Super Bowl on iPhone, iPad, and Apple TV

Thursday February 10, 2022 1:03 pm PST by Tim Hardwick
Super Bowl 2022 takes place on Sunday, February 13 at SoFi Stadium in Los Angeles, where the Cincinnati Bengals will take on the Los Angeles Rams. This article outlines some of the ways you can watch it for free on iPhone, iPad, Apple TV, and the web. When does Super Bowl LVI Start? Super Bowl LVI kicks off on Sunday, February 13 at 6:30 p.m. ET, or 5:30 p.m. Central, 4:30 p.m. Mountain,...
Read Full Article

iOS 15.4: How to Add Notes to iCloud Keychain Entries

Tuesday February 1, 2022 4:23 pm PST by Tim Hardwick
In iOS 15.4, currently in beta, Apple has added the ability for users to add notes to account entries in iCloud Keychain. This article explains how it's done. Slowly but surely with each iteration of iOS, Apple has been improving iCloud Keychain to put it on equal footing with rival third-party password managers such as 1Password. And in iOS 15.4, it continues that tradition with a simple...
Read Full Article

Thursday February 24, 2022 1:12 pm PST by Tim Hardwick
If you find yourself regularly swiping to a different watch face on your Apple Watch depending on what you're doing or where you are, this article is for you. Because thanks to the power that Apple has built into its Shortcuts app, it's possible to make the watch face on your Apple Watch automatically change based on the time of day or your location. Keep reading to learn how. One of the...
Read Full Article • 53 comments

iOS 15: How to Add a Hotel Room Key to iPhone and Apple Watch

Thursday December 9, 2021 8:02 pm PST by Tim Hardwick
In iOS 15, Apple has introduced the ability to add a hotel room key to the Wallet app on your iPhone, allowing users to consult their phone or Apple Watch for reservation details, as well as use them to check in and unlock their room. For example, Hyatt, a well-known hotel chain, in December 2021 announced its adoption of Apple's Wallet technology, with guests able to use Apple Wallet room...
Read Full Article