How to View Photos on Apple Watch

The Apple Watch may have a small screen, but it's still large enough to show off those pictures of your little one's dance recital to the grandparents. As long as you've got an album synced from your iPhone, you can even view pictures while your smartphone is out of range. 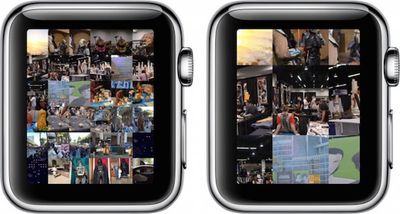 To help you get the most out of your photo viewing experience, we've put together this tutorial to explain how to set up and customize the Photos app on Apple Watch

Create an Album in Photos on iPhone

The first step to getting the most important pictures on your Apple Watch is to create an album for it in your Photos app on iPhone.

Sync an Album to Apple Watch

You can also select a preexisting album instead. You might prefer the immediacy of syncing with your Camera Roll or Photo Stream for currently added pictures instead. The Apple Watch Photos app is defaulted to your Favorites album.

You can customize how many photos you want synced to your Apple Watch for more control over how much room they take up. Select from 25 to 500 photos or five to 75 MB of storage space.

Use Photos App to View a Synced Album

Once you've synced an album to Apple Watch, view the pictures on your wrist via the Photos app. When you open it, the first screen will be a collage of all pictures in your album. Rotate the Digital Crown to zoom in.

Tap a picture to view it full screen. Use the Digital Crown to zoom in closer. Drag your finger on the screen to pan. Double Tap to fill the screen. Double-tap again to see the full picture. You can browse your album by swiping to the left or right to switch between photos.

Now that you know how to set up and customize your Photos app on Apple Watch, showing off important moments in your life will be simple.

When Apple updates watchOS to version 2 later this year, we will also be able to view videos from within the Photos app and use single photos or photo albums as backgrounds for watch faces.

DavidTheExpert
Can I make a request? I would really like to see a tutorial on how to view the time on the Apple Watch. I've had this thing for over a month and I still can't figure out how to make it show me the date and time. Is there some hidden setting?
Score: 12 Votes (Like | Disagree)

captain cadet
Or just pull your phone out to show people on a screen that they can actually see your face on...
Score: 10 Votes (Like | Disagree)

UnfetteredMind
I have to agree with captain cadet, unless you don't have your phone with you, why wouldn't you just take out the iPhone to which the :apple:Watch is tethered to show the pics? Maybe for very brief encounters where you don't even want to bother pulling out the phone (but then maybe it's not even worth trying to show the pic in the first place).
Score: 4 Votes (Like | Disagree)

Noble Actual
Please...do not use your Watch to show some pictures when you can just use your iPhone or iPad.

Its so damn small. And it's common knowledge that as you grow older, your eyesight gets worse. They probably can't even see it. Showing it on the iPad...now that's a magical and beautiful experience.
Score: 4 Votes (Like | Disagree)

doelcm82
How to view photos on the Apple Watch.

I am the proud owner of an Apple Watch, but I haven't yet seen one in person. Mine is "On Vehicle for Delivery Today".
Score: 3 Votes (Like | Disagree)

pubwvj
A more useful guide to these things:

Perhaps this is where MacRumors Bot is skimming from...

How about skipping the fake how-to click-bait and stick to real rumors that we care about...

And if you don't like complaints about bad articles just skip the comments complaining about them.
Score: 3 Votes (Like | Disagree)
Read All Comments