In just over a month, we will finally have the long-awaited Apple Watch in our hands, or technically, on our wrists. The first thing you'll need to do once you get a hold of the new gadget is pair it with your iPhone and prepare to install apps for it.

To make sure you are ready for the big day, we have a how-to guide for pairing your iPhone with your Apple Watch. It won’t be hard, but it will use technology to pair the two devices in a way we’ve never seen before on an Apple product.

Apple Watch will require connection to an iPhone 5, 5s, 5c, 6, or 6 Plus running iOS 8.2. With varying methods of connectivity between the devices, Apple has developed a interesting system to pair the two devices using a camera feature. 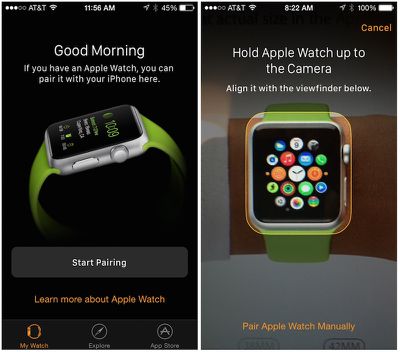 If you do not wish to use the camera feature, you can alternatively pair Apple Watch with your iPhone manually.

For the time being, third-party Apple Watch apps are actually hosted on the iPhone, with the apps able to serve various types of extensions to the Apple Watch for notifications and interactivity. Later this year, Apple will allow developers to begin developing apps that will run natively on the Apple Watch.

The question is how people without iPhones will be able to install apps on their watches?

I applied some common logic, high IQ and an experience of software development :) And a test using a photo of iWatch in front of iPhone camera :)


Well, look at the big brain on Brad!

So, was your test successful? Did the photo of the Apple Watch have enough verisimilitude to fool the companion app? I'm guessing you didn't get very far in your test.

Here's the test I want to see: Once you have an actual Apple Watch in hand, try the pairing process. However, instead of showing it your new watch, you show it the photo. If it still pairs, I'll be convinced.
Score: 9 Votes (Like | Disagree)

It's just a funky UI gimmick. It doesn't recognize anything when you show a picture of a watch to this app. Clearly it searches instead for Bluetooth for pairing.


Just curious: what your level of technical expertise is to say this?
Score: 9 Votes (Like | Disagree)

Interesting - I wonder how that camera pairing system works? I'd assume it has little to do with the camera itself and more to do with the Bluetooth connection underneath. Still an intriguing way to pair the two devices.