iOS developer Hamza Sood has shared further screenshots of the official Apple Watch app on iOS 8.2, providing a closer look at what the companion software looks like after pairing an Apple Watch. In particular, the screenshots reveal an Apple Watch setting menu for configuring the app layout, notifications, glances, brightness and text size, sounds and haptics, individual apps, internal options, and more. 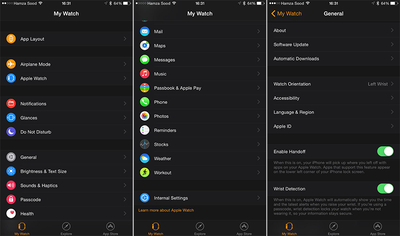 Apple Watch settings are similar to those found on iPhone, with About, Software Update and Automatic Downloads menus under General alongside options to adjust the watch orientation, accessibility, language and region, and Apple ID settings. Two toggle switches allow for Handoff and wrist detection to be enabled, the latter of which locks your Apple Watch when you're not using it to keep your information secure.

A few more interesting things. You can select playlists to sync accros, with an adjustable limit up to 2GB pic.twitter.com/d40El8N9sq — Hamza Sood (@hamzasood) March 13, 2015

Apple Watch will be available April 24, with pre-orders starting April 10 in the first wave of launch countries: United States, Australia, Canada, China, France, Germany, Hong Kong, Japan and United Kingdom. The wrist-worn device starts at $349 for the Apple Watch Sport, while the stainless steel models will retail for between $549 to $1,099 and the 18-karat gold Apple Watch Edition will cost up to $17,000.

These countries are the new first world, people. If your country isn't on this list, you're basically living in the stone age.

(Personally I'm surprised Canada made it)
Score: 20 Votes (Like | Disagree)

Rogifan
Does this mean a dark theme is coming to iOS? Yes please. :cool:

Err, iOS has always had a dark mode.

Edit: Some options like Mirroring are interesting: Select airplane mode on the iPhone -> Watch goes into airplane mode too.
Score: 15 Votes (Like | Disagree)

The health app tracks steps without a watch. Why not give this to everyone? I also wouldn't mind more front and center health reminders.
"It's getting late and you only did 5000 out of your target 6000 steps. Go grab a quick walk and hit your goal."