How to Download, Install, and Arrange Apps on Apple Watch

One thing that makes Apple Watch stand out from other smart watches is the app ecosystem. Since there are already more than a million iPhone apps in the App Store, there were already plenty of developers ready to get to work building companions for the wrist worn device. When the Apple Watch launched, there were already 3,500 apps available, and that number grows on a day-by-day basis. 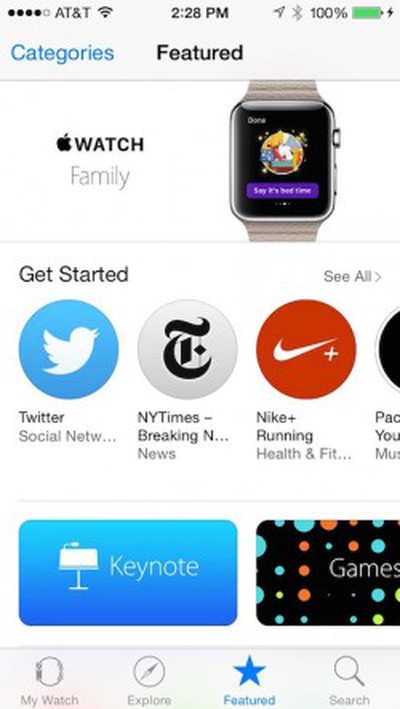 Once you've added apps to your Apple Watch and arranged your Home Screen just right, you’ll be ready to use all the apps you've installed. You can scroll through all of your apps with a finger, using the Digital Crown to zoom in. Launch your apps by zooming all the way in with the Digital Crown or with a simple tap on the app's icon.

These mile-long write-ups make it seem like Watch-related things are complicated. They're not. This does a tremendous disservice to Watch adoption in my opinion.


I was just about to write* not to be rude  but what's with all the 'How to...' articles? I'm sure they're well written and all, but this isn't exactly rocket science. I can't quite imagine anybody really requiring a guide for this stuff, never mind someone tech-savvy enough to be visiting MacRumors in the first place....? :confused:
Score: 11 Votes (Like | Disagree)

There's validity in that argument, but not yet having owned one myself, I trust Apple and their mostly dead-simple GUIs to make set-up and usage a snap.


Can tell you from experience, I got my watch, paired it, and knew how to use it without any tutorials by the end of the first day. It's really as simple as you'd expect from Apple. If anything, I am confused about the reviews which said it was complicated, or that it was giving too many notifications and such. The watch app lays it all out very clearly, so I chalk those issues up to absolutely lazy users who think that everything they do requires being in the "VIP" category.
Score: 10 Votes (Like | Disagree)

stevemiller
1. Publish the equivalent of an instruction manual of obvious functions as apple news
2. Make sure you post a separate article for each page of the manual
3. all readers will click through if for no other reason than to critique, or make satirical step by step guides...
4. PROFIT!!
Score: 8 Votes (Like | Disagree)

macs4nw
I'm really starting to warm up to going with this version of the AppleWatch, rather than waiting for the .2 version, especially for the fitness apps that I want to use already.
Score: 6 Votes (Like | Disagree)

happosai
Next article: how to charge your apple watch
Score: 5 Votes (Like | Disagree)

Jason83
These mile-long write-ups make it seem like Watch-related things are complicated. They're not. This does a tremendous disservice to Watch adoption in my opinion.
Score: 5 Votes (Like | Disagree)
Read All Comments

Thursday November 19, 2020 10:16 am PST by Juli Clover
Apple today released iOS 14.2.1, a bug fix update that comes two weeks after the launch of iOS 14.2 and is available for Apple's new iPhone 12 models. The iOS 14.2.1 update can be downloaded for free and it is available on all eligible devices over-the-air in the Settings app. To access the new software, go to Settings > General > Software Update. According to Apple's release notes, iOS...
Read Full Article • 156 comments

Wednesday November 18, 2020 6:07 pm PST by Arnold Kim
Codeweavers posted a blog post and video tonight showing off CrossOver running on an Apple M1 MacBook Air. This video shows Team Fortress 2 running on a new M1 MacBook Air: CrossOver is software (based on Wine Project) that runs Microsoft Windows apps on the Mac by translating Windows APIs into their Mac equivalents. The Codeweavers team was able to run the current version of CrossOver on...
Read Full Article • 178 comments

Thursday November 19, 2020 11:58 am PST by Juli Clover
Apple in iOS 14 is planning to introduce a new App Tracking Transparency feature that will let users know when companies want to track them across apps and website. Following outcry from developers like Facebook and ad networks unprepared for the change, Apple delayed the implementation of the anti-tracking functionality until early 2021. Eight civil society organizations recently sent a...
Read Full Article • 125 comments

Friday November 20, 2020 11:57 am PST by Juli Clover
Following the release of the M1 Macs Apple executives have been doing interviews with a range of publications, and today, Ars Technica published another interview with software engineering chief Craig Federighi, hardware technologies lead Johny Srouji, and marketing VP Greg Joswiak. Much of the interview focuses on topics that the three have already covered in prior discussions, but there is ...
Read Full Article • 236 comments

Wednesday November 18, 2020 11:20 am PST by Joe Rossignol
In an internal document obtained by MacRumors, Apple has acknowledged an issue with some iPhone 12 displays exhibiting flickering, a green or gray glow, or other unintended lighting variations under some conditions. In the document, shared with Apple Authorized Service Providers this week, Apple says that it is aware of customer reports related to this issue and is investigating. Apple has...
Read Full Article • 125 comments

Wednesday November 18, 2020 3:55 pm PST by Juli Clover
Apple appears to have released a revised version of iOS 14.2 that's available to those who have an iPhone 12 device and who have not previously installed the iOS 14.2 update. It's not clear why Apple has released a new version of iOS 14.2, but it may include minor bug fixes, perhaps for installation issues. The updated software has a build number of 18B111, while the original release has a...
Read Full Article • 93 comments

Thursday November 19, 2020 6:12 pm PST by Juli Clover
Following the release of macOS Big Sur last week, a number of 2013 and 2014 MacBook Pro owners found that the update bricked their machines. Affected users saw their Macs get stuck displaying a black screen after attempting to install the new software. Apple has now addressed this issue in a new support document that provides instructions on what to do if macOS Big Sur can't be installed on...
Read Full Article • 84 comments