Apple's new AirTag item tracker lets you easily track things like your keys, wallet, purse, backpack, luggage, and more. AirTags have a small, circular design with a white side and a polished stainless steel side with an Apple logo. 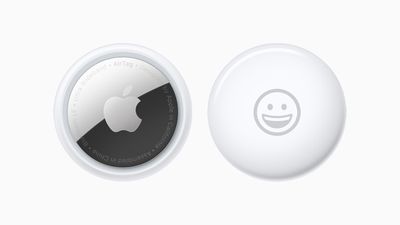 AirTag has been designed to discourage unwanted tracking. If you are an iPhone or iPad user, the built-in Find My app will notify you if an unknown AirTag is seen moving with you over time by displaying an "AirTag Found Moving With You" message on the screen. Even if you don't use an iOS device, an AirTag that isn't with the person who registered it for an extended period of time will play a sound when moved.

If an unknown AirTag is found to be moving with you, follow the steps below to disable the AirTag and stop sharing your location:

In a new support document, Apple says users who feel their safety is at risk should contact their local law enforcement, who can work with Apple. You might need to provide the AirTag or its serial number, according to Apple. If you need help finding the AirTag, tap Play Sound after tapping on the "AirTag Found Moving With You" message.

If you find an AirTag or a lost item with an AirTag attached that has not been moving with you, follow the steps below to learn about the AirTag and how to discover information about its original owner.

AirTags have unique Bluetooth identifiers that change frequently, which helps prevent you from being tracked from place to place, according to Apple. Apple says that no one, including Apple, knows the location or identity of any of the participating users or devices who help locate a missing AirTag.

alexandr
i think this was explained, but what if someone stole your bag and then did this? wouldn't that defeat the purpose of having an airtag in it?
Score: 71 Votes (Like | Disagree)

i think this was explained, but what if someone stole your bag and then did this? wouldn't that defeat the purpose of having an airtag in it?

This was exactly what I was going to post. I want these to put on my items of value. If they take my bag and get away, then couldnt they just deactivate them?
Score: 24 Votes (Like | Disagree)

I think a bigger issue is them alerting people on public transport along with you. Worse, a subset of those people are going to be either confused or deliberately annoying and are going to disable your tracker.

I believe as long as you are with it, it won't alert others.
Score: 19 Votes (Like | Disagree)

mazz0
I think a bigger issue is them alerting people on public transport along with you. Worse, a subset of those people are going to be either confused or deliberately annoying and are going to disable your tracker.
Score: 17 Votes (Like | Disagree)

mazz0
To be fair, as soon as these become popular thieves would start looking for and discarding them anyway, so they wouldn’t have been that useful for stolen goods anyway.
Score: 15 Votes (Like | Disagree)
Read All Comments

What to Do If You Find an AirTag Making a Sound

Monday May 10, 2021 9:43 am PDT by Tim Hardwick
Apple's AirTag item trackers are designed to keep tabs on personal possessions such as keys, wallets, backpacks, luggage and more using the Find My network on iOS devices. If an AirTag is separated for a period of time from its owner, it will make a sound to alert those nearby. If you find an AirTag after hearing it make a sound, here's what you can do to help return it to its rightful...
Read Full Article

Thursday May 6, 2021 1:29 pm PDT by Juli Clover
Apple's AirTags have a built-in safety feature that's designed to prevent them from being used to track you, so no one can plant an AirTag in your items and then monitor your location without your awareness. If there is an AirTag that does not belong to you near you for an extended period of time, your Apple device will alert you with the following notification: "AirTag Found Moving With...
Read Full Article

How to Change an AirTag's Battery

Friday April 30, 2021 1:49 pm PDT by Juli Clover
AirTags use standard coin-shaped CR2032 batteries, which are designed to last at least a year before needing to be replaced. No one should need to swap out a battery just yet, but when you do need a new battery, it's easy to put in a new one. CR2032 batteries are common batteries that can be purchased on Amazon for about a dollar per battery, and you can also get them at many retail stores....
Read Full Article

How to Check an AirTag's Battery Life

Friday April 30, 2021 5:05 pm PDT by Juli Clover
AirTags come equipped with a CR2032 battery that Apple says is designed to last for at least a year, so you shouldn't need to worry about the battery in your AirTag often. If you're curious about how it's holding up or if you're worried it could get low at a time that would be inconvenient, it's easy to check the battery level of an AirTag in the Find My app. Open the Find My app and...
Read Full Article

Tuesday May 4, 2021 3:26 pm PDT by Juli Clover
When you set up an AirTag, it's automatically associated with your Apple ID, which means it's linked to your Apple ID and can't be used by someone else unless you reset it. Resetting can be as simple as removing an AirTag from your Apple ID, by following these steps: Open the Find My app. Tap on the AirTag that you want to remove by choosing its name from the list. Swipe upwards...
Read Full Article • 69 comments