With the arrival of watchOS 7, Apple introduced headline features for Apple Watch like Sleep Tracking and Handwashing Detection, but it also snuck in a bunch of lesser changes and improvements to the interface that are more likely to have gone under the radar, so we've collected some of our favorites here. 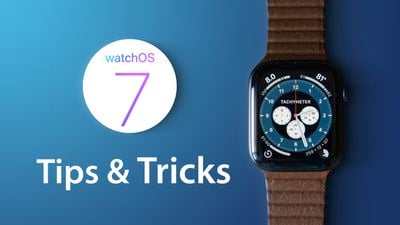 To make the most of them, you'll need to make sure your Apple Watch is up to date with the latest software. You can do that by opening the Watch app on iPhone and selecting General -> Software Update. (Note that you'll also need your ‌iPhone‌ to be running iOS 14 before you can update your watch to watchOS 7).

If you want to make your activity goals more challenging or more realistic, now you can. In watchOS 7, you can customize all of the activity goals on Apple Watch, including the stand goal.

Open the Activity app and scroll down to the bottom where you'll find a new Change Goals option. Tap that, and you'll be able to change your calorie, exercise, and stand goals using the plus and minus buttons.

Apple improved the translation capabilities of iOS 14 with the new Translate app, and now you can ask Siri for spoken translations right on your Apple Watch.

Raise your wrist and say "Hey ‌Siri‌," or press and hold the Digital Crown to let ‌Siri‌ know you have a query, then say something like "How do you say 'How are you?' in Chinese?" Your answer will be shown on the screen and ‌Siri‌ will also say it to you. ‌Siri‌ can translate 10 languages including Spanish, English, Japanese, Arabic, Chinese, and Russian.

In previous versions of watchOS, Apple only allowed native apps like the Weather app to show more than one complication on the same watch face.

In watchOS 7, Apple has made it so that you can have multiple complications from the same third-party app on the same watch face. That means you can use a face like Infograph Modular to present multiple information streams from an app like Heart Analyzer, for example, for a data-rich live health readout.

4. Use the New Workout Types

Like other workout types, Apple Watch applies unique algorithms to the data gathered by the onboard accelerometer, gyroscope, and the heart rate monitor to accurately measure your exertion.

watchOS 7 brings some new watch faces to the party, one of which is GMT. The watch face has two dials: A 12-hour inner dial that displays local time, and a 24-hour outer dial that lets you track a second time zone.

Just tap the watch face to select the time zone you want to display on the outer dial. This watch face is available only on ‌Apple Watch SE‌ and Apple Watch Series 4 and later.

6. Get Cycling Directions in Maps

In watchOS 7, you can now see cycling directions on your Apple Watch. The Maps app presents the desired route along with information such as elevation, traffic, and the availability of bike lanes.

Cycling directions include options to be taken along the quickest route, the most direct path, or routes that avoid steep hills (Fastest, Shortest, and Suggested.) Note that at the time of writing, cycling directions in ‌Apple Maps‌ are limited to New York, Los Angeles, San Francisco, London, Shanghai, and Beijing.

7. Use Siri Shortcuts on Apple Watch

The Shortcuts app is now available on Apple Watch, so you can trigger custom tasks with just a tap on the wrist.

By creating shortcuts on your ‌iPhone‌, you can quickly get directions home, create a top 25 playlist, control HomeKit accessories, and more. Shortcuts can be run from the Shortcuts app or you can add them as complications to your watch face.

Apple has introduced a new complication for the Camera Remote app, so now you can control your ‌iPhone‌'s camera with a quick tap on your watch face.

There's also a new three-second countdown in the Camera Remote app, should you need it.

The new Count Up watch face can be used to track elapsed time. Tap the main 12-hour dial to align the marker on the outer bezel with the minute hand. Turn the Digital Crown to set the length of time, then tap the dial again to start timing.

When you're finished, you can return the face to its default state by tapping the red elapsed time button, or by pressing the Digital Crown.

To remove a button, simply tap the red minus icon attached to it. Any buttons you remove can be reinstated by tapping the Edit button again.

11. Get an Extra Big Complication

If all you're interested in is the time and a single data point, you're in luck – the X-Large face now includes the option to add a rich complication.

It's the biggest complication yet, but it's the only one you get – so choose wisely.

The Apple Watch Series 6 can occasionally measure your blood oxygen levels in the background and will usually do this when you're not moving. It uses a bright red light that shines against your wrist, which you might find distracting in dark environments.

Stripes, another new watch face that's unique, lets you select the number of stripes you want (up to 9), choose your colors, and rotate the angle, allowing you to re-create your favorite sports team's colors or your nation's flag.

You can also switch between a full-screen face or a circular face with space for up to four complications. This watch face is available only on ‌‌Apple Watch SE‌‌ and Apple Watch Series 4 and later.

An associated feature of Family Setup, "Schooltime," can help make your Apple Watch less of a distraction when you want to focus on something. It's a useful alternative to Do Not Disturb or Theater Mode because it silences notifications and blocks apps, but still lets you check the time.

Kabeyun
Very useful summary, thanks Tim. And I got a chuckle that when it comes to activity goals the opposite of “challenging” is “realistic.” lol
Score: 3 Votes (Like | Disagree)

Very useful summary, thanks Tim. And I got a chuckle that when it comes to activity goals the opposite of “challenging” is “realistic.” lol

My activity goals tell me to "give up already". :p
Score: 2 Votes (Like | Disagree)

I was using it because I thought it looked great, but the “count up” feature is in no way useful to me. I wish it was count up/down, so it could function as a quick-set timer.
Score: 2 Votes (Like | Disagree)
Read All Comments