While the iPhone XR and ‌iPhone‌ 11 have now been discontinued, some customers may be wondering which of these two older iPhones is may be better. The two devices have quite a few similarities, but the ‌iPhone‌ 11 takes a step forward in regards to cameras, battery life, and more. 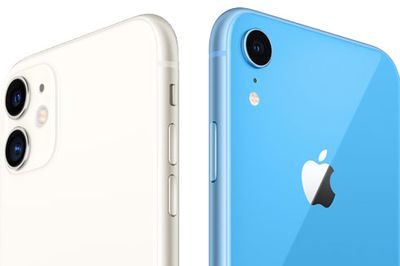 The ‌iPhone‌ 11 has a very similar glass-and-aluminum design as the ‌iPhone‌ XR, with one major visual difference being its dual-lens rear camera system housed in a large, square camera bump. On the back of the ‌iPhone‌ 11, the Apple logo is centered, and the "‌iPhone‌" brand name is no longer shown.

Otherwise, much is the same, including the display, bezels, notch, antenna bands, volume and side buttons, mute switch, speaker grilles, and microphones. The ‌iPhone‌ 11 also sticks with the Lightning connector.

Both devices weigh in at just under half a pound and have identical dimensions.

The ‌iPhone‌ 11 has the same 6.1-inch LCD as the ‌iPhone‌ XR, including a resolution of 1792×828 pixels for 326 pixels per inch, 625 nits max brightness, and True Tone and P3 wide color gamut support. The LCD panel keeps costs down compared to the OLED displays used for the iPhone 12 lineup.

Like the ‌iPhone‌ XR, the ‌iPhone‌ 11 relies on software-based Haptic Touch for contextual menus and shortcuts. Unlike older iPhones, there is no pressure-sensitive 3D Touch layer built into the ‌iPhone‌ 11's display.

Apple says the ‌iPhone‌ 11 has up to one hour longer battery life than the ‌iPhone‌ XR overall. Based on Apple's internal testing, the ‌iPhone‌ 11 is rated for up to 17 hours of offline video playback, up to 10 hours of streaming video over Wi-Fi, and up to 65 hours of audio playback per charge.

Like the ‌iPhone‌ XR, the ‌iPhone‌ 11 supports Qi-based wireless charging, as well as fast charging for up to a 50 percent charge in 30 minutes with an 18W or higher USB-C charger.

The ‌iPhone‌ 11's wide-angle lens also has an updated sensor that enables Night Mode for markedly improved low-light photos that are brighter and have less noise. This feature is similar to Night Sight on Google's newer Pixel smartphones.

Portrait Mode on the ‌iPhone‌ 11 works with not only human faces, but also objects and pets.

With both 802.11ax Wi-Fi and Gigabit-class LTE, the ‌iPhone‌ 11 theoretically has faster download speeds than the ‌iPhone‌ XR, but real-world performance is typically limited by multiple factors such as location and network congestion.

The ‌iPhone‌ 11 also features an Apple-designed U1 chip that enables ultra-wideband support for improved spatial awareness. The chip enables the ‌iPhone‌ 11 to precisely locate other U1‑equipped Apple devices, such as other iPhones and Apple's AirTags.

‌iPhone‌ 11 is available in 64GB and 128GB for $499 and $549 respectively, while the ‌iPhone‌ XR will be available in similar storage configurations for prices around $100 lower than this.

Below you'll find tech specs for ‌iPhone‌ 11 and ‌iPhone‌ XR, with each difference bolded.

I have an XR. The only thing I want on the 11 is night mode. Not enough to upgrade. Feels good for once to skip, actually.

*edit* just like with Google Night Sight, this isn’t for moving subjects, you have to hold still a few seconds using this app!

Here’s a good Night Mode solution for $2.99, I bought it for my iPhone X and it works really well:

Exclusive to 11. Requires the better cameras.

Does it though, or is that what Apple want you to believe? They were pushing how important AI was for many (if not all) of these "pro" features and if the competitors' night modes are anything to go by they're done through computation rather than "the latest lens that our old camera didn't have".
Score: 15 Votes (Like | Disagree)

Sasparilla
Have to add for advantages for the Xr is the blue color. Was planning on getting a blue 11. :(

Would not be surprised if the spatial awareness stuff and the wide angle 2nd camera gets used for AR stuff in the future (was really surprised they didn't do something with it during the keynote - cause otherwise a zoom camera would be a no brainer choice for a 2nd camera).

I'm tempted to finally upgrade my 8 Plus and I'm tempted by the iPhone 11 but will I notice the difference with the lower resolution screen?

It's still retina resolution (the same resolution (dots per inch) as the base 8). I had a 8 Plus and didn't notice the difference with the Xr.

Question about Night mode.... is this a 11 and 11 pro exclusive or is it going to be a software update for the Xr?

Exclusive to 11. Requires the better cameras.
Score: 9 Votes (Like | Disagree)

So the 11 with a13 has 40 percent efficiency gains but only yields one hour more battery (and that’s the marketing claim, too) with same screen and resolution and all the rest except a dual camera? How does that make any mathematical sense?

Still xr gets excellent battery life and I’d expect no less of the 11
Score: 7 Votes (Like | Disagree)

GeoStructural
I need a Product(RED) iPhone Pro. It would be beautiful.
Score: 7 Votes (Like | Disagree)
Read All Comments

9 hours ago by Hartley Charlton