All the iPad Trackpad Keyboard Cases You Can Buy

With the release of iPadOS 13.4 in March 2020, Apple introduced official Bluetooth mouse and trackpad support for iPads. The update added support for Apple's own standalone keyboards, mice and trackpads, as well as third-party input devices. It also paved the way for the release of Apple's own Magic Keyboard for iPad Pro, which launched ahead of schedule in late April. 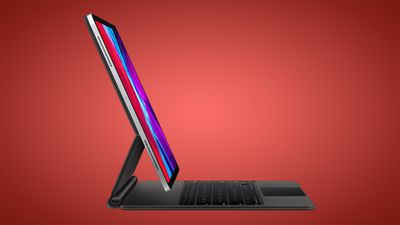 Apple's new Magic Keyboard isn't the only iPad keyboard case with a built-in multi-touch trackpad, though. In this regularly updated article, we round up all the current all-in-one case options for ‌iPad‌ owners looking to take advantage of keyboard and trackpad input.

Starting with Apple's own, the $300 Magic Keyboard attaches magnetically to ‌‌iPad Pro‌‌ and includes a floating design that works on either a lap or a desk, and an integrated trackpad for controlling an onscreen pointer, which allows users to enhance their workflows in multiple ways.

It features cantilevered hinges for smooth adjustments of the viewing angle up to 130 degrees, including a full-size keyboard with backlit keys and a scissor mechanism that delivers 1mm travel. The only real drawback is that the layout lacks a row of function keys, so users have no dedicated key for adjusting some system settings, including keyboard backlight brightness.

The biggest complaint about the new Magic Keyboard has been the weight, which adds quite a lot of bulk to the ‌‌iPad Pro‌‌. In fact, the 12.9-inch model paired with a Magic Keyboard is heavier than a MacBook Air.

Long before Apple introduced trackpad support in iOS 13.4, Brydge announced an ‌iPad Pro‌ keyboard with a built-in multi-touch trackpad. The trackpad was originally included to take advantage of the AssistiveTouch features in iPadOS, but now that Apple provides broader trackpad support, Brydge allows users to update their device's firmware to take advantage of the added functionality, using the Bridge Connect app.

The Brydge Plus Pro keyboard attaches to the ‌‌iPad Pro‌‌ using a set of hinges that allow the ‌‌iPad Pro‌‌'s angle to be adjusted to suit. Like the ‌iPad Pro‌, it's made entirely from aluminum, so the two match up well.

There are cases available for the latest-generation 11-inch and 12.9-inch ‌iPad Pro‌ models for $200 and $300 respectively, but unlike Apple's Magic Keyboard, the Brydge connects via Bluetooth 4.1 instead of the Smart Connector. As such, it has to be charged separately, and has an advertised three-month battery life per charge.

There's also a row of function keys, with other options available for accessing the Home screen, adjusting screen brightness, accessing search, and accessing media controls. The case adds some protection to the ‌iPad‌ and includes a holder for the original Apple Pencil or Logitech Crayon.

Design wise, the keyboard case has a Microsoft Surface look and feel to it thanks to the fabric build, offering full protection for the ‌‌iPad‌‌ except for the section where the keyboard connects. With the keyboard attached, the ‌‌iPad‌‌ is protected when the case is closed up and not in use.

Similar in design to the Combo Touch, the Folio Touch features a case that wraps around the ‌‌iPad‌‌ along with a laptop-like keyboard with a built-in trackpad that works with the ‌‌iPad Pro‌‌'s trackpad support. There's also an adjustable kickstand to allow for greater positioning flexibility, an ‌Apple Pencil‌ holder, and four use modes that include typing, viewing, sketching, and reading.

Logitech is selling the Folio Touch for $160. Apple's Magic Keyboard for ‌‌iPad Pro‌‌ is much more expensive at $300, so the Folio Touch definitely has affordability in its corner.

The keyboard is detachable and an integrated stand allows it to be used in various typing, viewing, sketching, and reading modes. It connects to an ‌‌iPad Pro‌‌ using the ‌Smart Connector‌, so there's no need for pairing or charging a battery.

Logitech's Combo Touch only comes in gray. The 11-inch version can be purchased from the Logitech website, and a version for the 12.9-inch ‌‌iPad Pro‌‌ is coming soon.

Compatible with the third, fourth, and fifth-generation ‌iPad Pro‌ models, the Brydge 12.9 MAX+ is a Bluetooth keyboard case that connects to the back of the ‌‌iPad Pro‌‌ magnetically, similar to the Magic Keyboard, but it doesn't have the same elevated angling and instead uses a flatter, more typical laptop design.

The keyboard has a row of shortcut keys above the number row for controlling screen brightness, accessing media controls and emoji, and more. Meanwhile, the trackpad is much larger than the one on Apple's Magic Keyboard, and more comparable to the trackpad on the MacBook Pro.

Subscribe to the MacRumors YouTube channel for more videos.
Note that this is a Bluetooth keyboard. In other words, it doesn't connect to the ‌Smart Connector‌ like the Magic Keyboard, so it will need to be manually charged at times. Shipping in June, the Brydge 12.9 MAX+ is priced at $250, which is $100 cheaper than Apple's Magic Keyboard for the 12.9-inch ‌‌iPad Pro‌‌. The Brydge 12.9 Max+ will be available in space gray, silver, and black.
Related Roundups: iPad Pro, iPad, iPad Air
Buyer's Guide: 11" iPad Pro (Buy Now), 12.9" iPad Pro (Buy Now), iPad (Buy Now), iPad Air (Neutral)
Related Forum: iPad
53 comments

kissmo
I have the MK.... I had regrets when I ordered it, almost canceled and then... it arrived.
And now it's my favorite accessory and I use my iPad pro a lot more often for more use cases.

The keyboard, the trackpad and the form factor are super awesome.
The minuses: weight and the fact that the outside will not look well over time.
Score: 8 Votes (Like | Disagree)

Props to the designers and engineers at Apple who crafted such as beautiful ensemble. I think the iPad Pro w/MK is the product of the year. How many knock-offs will we see next year?

The secondary hinge that lets the bottom of the iPad tilt forwards while the top of the iPad tilts backwards is pure genius. For two reasons:
[LIST=1]
* It pulls the iPad's center of gravity towards the user and keeps it in front of the main hinge. This prevents the whole assembly toppling backwards. This is a huge challenge because, unlike a typical laptop, most of the weight of this assembly is in the "screen" half. Less demanding engineers would "work-around" this by adding weight to the keyboard and the whole thing would become unnecessarily heavy.
* It makes it so easy and natural to slip your hand behind the bottom edge and just lift the iPad up. Power reconnects and disconnects without thought.

I'm not sure whether the engineers were primarily aiming for 1 or 2? Either way, they nailed both. I'm impressed.
Score: 4 Votes (Like | Disagree)

rp2011
Props to the designers and engineers at Apple who crafted such as beautiful ensemble. I think the iPad Pro w/MK is the product of the year. How many knock-offs will we see next year?
Score: 4 Votes (Like | Disagree)

Why is the Brydge keyboard "obviously awful"? It actually seems the best of the bunch...

Because the trackpad doesn’t have all gestures, wich makes it useless for me. The Logitech was developed in contact with Apple to ensure full compatibility. It also lacks a holder for Apple Pencil and has no protection when used vertically. It turns iPad into a laptop, while it’s Strength is modularity. Just my opinion, of course.
Score: 4 Votes (Like | Disagree)
Read All Comments