When Apple debuted the new Magic Keyboard with Trackpad for the iPad Pro, Logitech also announced new keyboards with trackpads that take advantage of the trackpad functionality in iPadOS 13.4 but are designed for older iPads, including the most recent iPad Air, the 10.5-inch ‌iPad Pro‌, and the 7th-generation iPad.

Subscribe to the MacRumors YouTube channel for more videos.
We got our hands on one of the new Logitech Combo Touch Keyboard Cases with Trackpad designed for the ‌iPad Air‌, and we thought we'd check it out to see how it works and whether it's worth the $150 purchase price.

Design wise, this is a high-quality keyboard case that's got a Microsoft Surface look and feel to it thanks to the fabric build, offering full protection for the ‌iPad‌ except for the section where the keyboard connects. With the keyboard attached, though, the ‌iPad‌ is protected when the case is closed up and not in use. 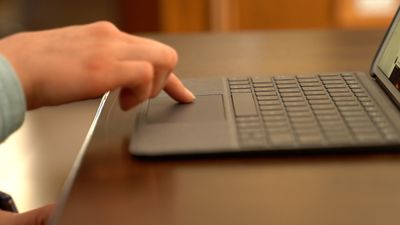 A pop-out kickstand provides 40 degrees of adjustment so it can be set to different angles for typing, watching media content, and browsing the web, and it's a solid kickstand that works well. There's also a handy Apple Pencil holder at the top to keep that accessory tucked away when not in use.

The trackpad and keyboard combo is fantastic with the iOS 13.4 trackpad integration, and it adds a new level of productivity to cases that just offer keyboards. The trackpad is a bit firm and there's a small zone at the top where it can't be clicked, but that doesn't hinder every day use.

Smooth scrolling, tap to click, and gesture support make it a pleasant usage experience, and it's clear that this was designed from the ground up with iOS 13.4 in mind. It's a solid experience that outperforms the Brydge Pro+ with trackpad that we also recently looked at.

The keyboard is a little bit cramped when typing, but the keys feel great under the fingers with a decent amount of key travel. We did run into an issue where some keys occasionally failed to work, which as cover in the update below, was fixed by changing the settings of the keyboard.

The keys are backlit and brightness can be toggled using function keys, with other options available for accessing the Home screen, adjusting screen brightness, accessing search, and accessing media controls.

When using this keyboard in the lap without a flat surface, it works, but it's not the best experience. It's simple to type, but there is some screen wobble depending on how hard you're typing.

All in all, this is a solid keyboard option for those who don't have an ‌iPad Pro‌ and won't be able to get the Magic Keyboard. For those who want to add more functionality to their iPads and use them for a lot of typing and tasks where a trackpad would come in handy, Logitech's Combo Touch Keyboard Cases with Trackpad are well worth the purchase price and can be picked up from the Apple Store.

Update: As suggested by on the MacRumors forums, the bug where the keys weren't working properly was fixed by opening up Settings, accessing the General setting, and changing the language of the keyboard to U.S. English instead of automatic.

Yeah, magic keyboard doesn't have any of those nasty function keys cluttering it up like the Logitech does. Functionality be damned!

Careful what we wish for! Apple is not above “addressing” these complaints about F-keys. They WILL put an EmojiBar on this mofo! Don’t taunt them...
Score: 8 Votes (Like | Disagree)

kitt9000
The occasional some keys not working was addressed in the macrumor forums in a Logitech keyboard thread. The issue is in the settings -> general —> keyboard -> language is set to “automatic” and needs to be changed to us English. This fixes the issue. Please try this and update the review. Thanks.
Score: 7 Votes (Like | Disagree)

jbs-horn
I bet the non-working keys can be fixed by setting the keyboard to the language of your choice rather than depending on the "automatic" setting in iPadOS. Settings/General/Keyboard/Hardware Keyboard/English (US) or whatever. This all began with 13.4 for both of my iPad Pros. They both use Logitech keyboards and both had the non-functioning single or double quote, I don't remember which, until I fixed the keyboard language issue.
Score: 6 Votes (Like | Disagree)

Yeah, magic keyboard doesn't have any of those nasty function keys cluttering it up like the Logitech does. Functionality be damned!
Score: 3 Votes (Like | Disagree)

tripleburst
I hope Logitech is working on a 2018/2020 Pro version.
Score: 2 Votes (Like | Disagree)
Read All Comments

Sunday January 23, 2022 10:32 am PST by Juli Clover
Apple is working on a number of new products that are set to launch this fall, and Bloomberg's Mark Gurman says that it will be "the widest array" of new devices that Apple has introduced in its history. In his latest "Power On" newsletter, Gurman explains that Apple is working on four new flagship iPhones (iPhone 14, iPhone 14 Max, iPhone 14 Pro, and iPhone 14 Pro Max), an updated low-end Ma...
Read Full Article • 236 comments