The iOS 16 Maps app didn't get as many changes as some of the other apps in the update, but there is at least one major change that's worth noting -- multi-stop routing. Multi-stop routing is a long-awaited Maps feature, plus there are a few other new options. 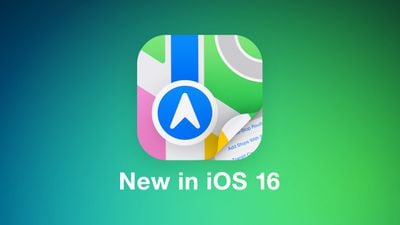 This guide highlights all of the features that are new to the Maps app in ‌iOS 16‌, which is available now as a public beta with a full public release likely coming in September.

With ‌iOS 16‌, you can plan a route that has multiple stops for the first time. Prior to now, you could only route yourself to a single location, and the Apple Maps app was far behind competitors like Waze and Google Maps when planning for more than one stop on a trip.

When you type in a destination in the Maps app in ‌iOS 16‌, you can tap on the new "Add Stop" button to choose multiple locations. Up to 15 locations can be added on one route, and the Maps app will go to each stop in turn. Note that the Maps app does not optimize the route, so you'll need to do that manually when you type in stops.

If you're already on the road and want to insert a stop into your route, you can use Siri voice commands to do so.

For planning a trip with multiple stops, you can get everything ready on the Maps app on Mac, then port it over to the iPhone when you're ready to go.

To accommodate the new multi-stop routing option, getting directions has been streamlined. It's simpler to change between driving, walking, transit, cycling, and ride share.

There are also drop down menus for changing travel mode, time you want to leave, and options to avoid tolls or highways, which makes it quicker to drill down into your preferences when getting directions.

The recent routes that you've used will show up in the Recent section for quicker access.

When planning a transit route, you can see how much it will cost in transit fares in select cities.

The Maps app in ‌iOS 16‌ has a toggle for allowing companies to use photos that you upload using the built-in Maps rating feature. This is applicable to companies that provide photos to Maps, and it includes location information, but not identity.

Have questions about Maps in ‌iOS 16‌, know of a feature we left out, or want to offer feedback on this guide? Send us an email here.

_Spinn_
I really like the improvements Apple has been making to Maps lately. One thing I would like to see is my actual speed when driving.
Score: 20 Votes (Like | Disagree)

tYNS
Just used Apple Maps on a trip we took. It is fantastic. Very accurate and the predictive assisted lane usage was great to making sure travel was easy. Can't wait for the multi-route feature. Great job the apple team is doing.
Score: 18 Votes (Like | Disagree)

I really like the improvements Apple has been making to Maps lately. One thing I would like to see is my actual speed when driving.

Does your speedometer not work?
Score: 18 Votes (Like | Disagree)

Anijake
did they do anything to the crash report. It really needs to go by distance instead of time when asking if its still there because if stuck in the traffic caused by the crash, it will timeout before I get there to see if it just traffic or the crash is still there..
Score: 15 Votes (Like | Disagree)

I wish Apple Maps had look around everywhere like Google Street View. Apple had cars all over the U.S. for years now, so I don’t know why look around is so slow to roll out and so limited.

I also desperately wish Apple Maps had first party reviews right in the app and showed how busy a location was (and it’s usual business depending on the hour and day of the week) like Google Maps does.

I find myself stuck in between maps apps because of this. Apple is great for navigation. Google Maps is better for discovering places, seeing business levels, and for reviews/questions about places. Waze is best for rough traffic, road trips, or the most up to date road status.

I wish Apple Maps could combine the best features of all three apps.
Score: 13 Votes (Like | Disagree)

DreadedFun
Living in Denmark I expect not to see any of these features. Apple is very limited in their features when it comes to spread it out to more countries. It’s like they develop a feature, include it in the product for the US, set the tick mark that’s it is done and then stop spreading it out to the rest of the world.

Sorry, I need to rant every time I see some new Maps features and know that the rest of the world only gets small part of these features and Apple don’t seem to care.

Still don’t have swipe keyboard in my native language. No word predictions. Stuff that 3rd party keyboards have had since 3rd part keyboards became a thing.
Score: 11 Votes (Like | Disagree)
Read All Comments

iOS 16 Security and Privacy Features: Everything You Need to Know

Thursday August 4, 2022 3:46 pm PDT by Juli Clover
Every iOS update adds new privacy and security features, and iOS 16 is no exception. Apple has added tools to make it easier to apply security updates, new Face ID capabilities, improvements to photo security, and more, with details on all of the new privacy and security options outlined below. Safety Check The Settings app houses a new "Safety Check" feature that is designed to make it...
Read Full Article • 49 comments

Everything New With Siri and Dictation in iOS 16

Thursday July 21, 2022 2:16 pm PDT by Juli Clover
With every iteration of iOS, Apple makes improvements to the built-in Siri voice assistant, and iOS 16 is no exception. Offline support has been expanded, Siri can finally hang up calls, and there's improved guidance on when and where you can access Siri. This guide outlines everything that's new with Siri, plus it includes details on the updates to Dictation. Siri Simpler Shortcuts...
Read Full Article • 106 comments

iOS 16: Everything New With Notes and Reminders

Thursday August 11, 2022 2:20 pm PDT by Juli Clover
The iOS 16 update focuses primarily on the Lock Screen and new features for apps like Mail, Messages, and Photos, but Apple did make some small changes to the Notes and Reminders app, adding a handful of new options. This guide highlights all of the new features in the iOS 16 Notes and Reminders apps. Notes There are some quality of life improvements for the Notes app, most notably an...
Read Full Article • 73 comments

iOS 16 iCloud Shared Photo Library: Everything You Need to Know

Tuesday August 2, 2022 2:03 pm PDT by Juli Clover
iOS 16 adds an iCloud Shared Photo Library to make sharing photos with your friends and family easier than ever. You can create a shared library and then invite any of your friends with an Apple product to view photos, contribute photos, and edit photos. This guide covers all of the features that you need to know about to use iCloud Shared Photo Library when iOS 16 launches in September. C...
Read Full Article • 179 comments

Wednesday July 20, 2022 1:15 pm PDT by Juli Clover
Apple today released iOS 15.6 and iPadOS 15.6 to the public after two months of beta testing. As these will be some of the final updates to iOS 15 and iPadOS 15, there are a limited number of new features and bug fixes. We've outlined everything that's new in iOS 15.6 below. Live Sports Updates With iOS 15.6 and iPadOS 15.6, the TV app now supports restarting, pausing, rewinding, and...
Read Full Article

Friday July 8, 2022 1:08 pm PDT by Juli Clover
With iOS 16 and iPadOS 16, Apple has added a number of improvements to the Mail app to bring it in line with competing email apps. The Mail app includes search updates, an undo send option, and tools for getting reminders about emails that you need to follow up on, plus more. This guide covers everything that you need to know about the Mail app in iOS 16, with these features set to be...
Read Full Article • 101 comments

All of the Live Text Updates in iOS 16

Friday August 5, 2022 10:58 am PDT by Juli Clover
Last year in iOS 15, Apple added a feature that is designed to let you highlight and select written and typed text from photos, interacting with it as you would text in any other place in the operating system. Subscribe to the MacRumors YouTube channel for more videos. With iOS 16, likely launching to the public in September, Apple has continued to improve Live Text, and it has some...
Read Full Article • 23 comments