Apple today released iOS 14.4 and iPadOS 14.4 to the public, introducing some notable new bug fixes and feature tweaks. We've highlighted everything that's new in the update below, so you can get a quick overview of what to expect after installing it. 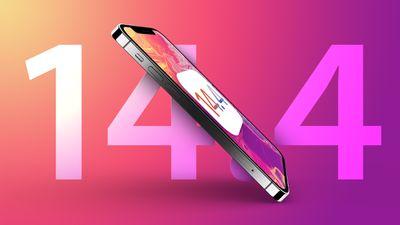 It's important to update to iOS 14.4 and iPadOS 14.4 on all of your devices as soon as possible because the software includes fixes for three major security vulnerabilities that Apple says may have been used in the wild.

According to a security support document shared by Apple, there were kernel and WebKit vulnerabilities affecting all iPhones and iPads running iOS or iPadOS 14. The kernel vulnerability could allow a malicious application to elevate privileges, and Apple says it is aware of a report that the issue may have been actively exploited.

Available for: iPhone 6s and later, iPad Air 2 and later, iPad mini 4 and later, and iPod touch (7th generation)
Impact: A malicious application may be able to elevate privileges. Apple is aware of a report that this issue may have been actively exploited.
Description: A race condition was addressed with improved locking.
CVE-2021-1782: an anonymous researcher

Apple also says a WebKit issue that allowed for a remote attacker to cause arbitrary code execution may have been actively exploited.

There is no other information available at this time, but again, it's worth updating right away just to make sure you're not affected by these security issues.

When scanning a QR code with the iPhone's camera, the camera is now able to recognize smaller QR codes so overall QR code recognition functionality should be improved.

iOS 14.4 includes a setting to specify a device type for third-party Bluetooth-connected audio devices so that Headphone Audio Level measurements can be taken correctly. Apple tracks headphone audio levels to send alerts if music is playing at a level that has the potential to damage hearing health over time.

There are fixes for several bugs in iOS 14.4, some of which have been irritating ‌iPhone‌ users for months now.

If you have a connected Apple Watch running watchOS 7.3 and are subscribed to Apple Fitness+, there's now an option in the Apple Watch Workout app to listen to "Time to Walk" stories, where guests share inspiring stories as you do a walking workout.

Time to Walk offers audio stories from music artists, athletes, and other influential people that Apple Watch owners and Apple Fitness+ subscribers can listen to while walking.

During the beta testing period, those who also had the invite-only HomePod mini beta discovered that the iOS 14.4 update and HomePod 14.4 update enable new HomePod mini functionality that takes advantage of the U1 chip in the speaker.

This functionality will make handoff quicker and more reliable on a ‌‌‌HomePod mini‌‌‌ and an ‌‌iPhone‌ 11‌ or ‌‌iPhone 12‌‌, all of which are equipped with U1 chips that let the devices better understand where they are in relation to one another. The ‌iPhone‌ will also provide personalized listening suggestions when next to a ‌HomePod mini‌, and media controls for the ‌HomePod mini‌ will automatically appear without having to unlock the ‌iPhone‌. These features are limited to the ‌HomePod mini‌ as the ‌HomePod‌ does not have a U1 chip, and an ‌iPhone‌ 11 or 12 is required.