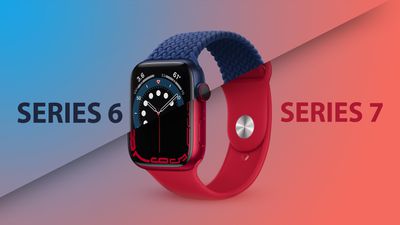 The Apple Watch Series 7 offers a number of upgrades and improvements on 2020's Series 6, offering a larger display with bigger casing sizes, faster charging, and the S7 chip, for a price starting at $399.

As these two models share many key features, including ECG functionality, blood oxygen monitoring, and an always-on display, it may not be immediately obvious which model is better for you. Is it worth purchasing or sticking with the slightly older model with fewer features to save money? Our guide helps you to answer the question of which of these two Apple Watch models is best for you.

With just one year between them as flagship smartwatches, the Apple Watch Series 6 and Series 7 share most of their important features. Apple lists these identical aspects of the two models:

Apple's breakdown shows that the two models share an overwhelming majority of features. Even so, there are a number of important differences between the Series 6 and the Series 7 that are worth highlighting, such as casing sizes, fast charging, and color options.

Read on for a closer look at each of these aspects, and see what exactly both of the most recent Apple Watch models have to offer.

The display of the Apple Watch Series 7 has a refractive edge that curves around the top of the device, allowing full-screen watch faces and apps to almost reach the casing.

The casings of the Apple Watch Series 7 are also physically larger, offering 41mm and 45mm models. This is a 1mm increase over the Series 6's 40mm and 44mm casing sizes. All of the Apple Watch Series 7 models are also heavier than their Series 6 predecessors, which could make the weight difference when switching from an aluminum to a stainless steel model even more pronounced.

The Apple Watch Series 7 is also certified as IP6X dust-resistant, making it more durable for environments such as the beach or the desert. The Series 7, like the Series 6, continues to be "swimproof" with water resistance up to 50 meters deep.

While the improved durability is unlikely to singularly motivate purchases of the Series 7, it could be an important factor for users who often frequent dusty or sandy environments, or have been prone to cracking their watch in the past.

The display of the Apple Watch Series 3 (left), Series 6 (middle), and Series 7 (right)

The larger display of the Apple Watch Series 7 models allows it to show more content and Apple has optimized watchOS 8 to take advantage of the additional space with larger menu titles and buttons in apps. There are two additional larger font sizes and a new QWERTY keyboard that can be tapped or swiped with QuickPath.

The Series 6's display will be more than adequate for a good Apple Watch experience, but the Series 7 simply elevates watchOS with more space for UI elements and the likes of a full-sized keyboard. If you have longed for a bigger Apple Watch display, the Series 7 could be a much better option than the Series 6, but for most users, the increase is likely too inconsequential to justify upgrading.

The changes in the S7 chip generally relate to smaller tweaks to maintain the same "all-day" battery life with a larger display. Apple has done this before with the S5 chip, which had the same CPU as the S4 chip, simply adding a gyroscope.

The S7 chip is not a good reason to upgrade to the Apple Watch Series 7, representing a small iterative improvement rather than any noticeable performance or efficiency boost.

According to Apple, just eight minutes of charging time can provide eight hours of sleep tracking with the Series 7. This is partly thanks to a new USB-C magnetic fast charging cable that is included with the Apple Watch Series 7 in the box.

If you find that you have little time to charge your Apple Watch during the day, the Series 7's faster charging could be an important reason to upgrade for you. Even so, both devices still have the same "all-day" 18-hour battery life and will need to be recharged every day.

If you were already siding with the Apple Watch Series 6, it may be worth exploring the lower-cost ‌Apple Watch SE‌. If you are looking for the most out of your Apple Watch and are particularly interested in health-monitoring features, the ‌Apple Watch SE‌ may not be suitable.

There is also the Apple Watch Series 3, which Apple sells for $199. This older model offers substantially fewer features and has a smaller screen. The Apple Watch Series 3 is still a capable device, with 8GB of storage, water-resistance up to 50 meters, an altimeter, Emergency SOS, and an optical heart sensor. Functionally, it is more pared back than the ‌Apple Watch SE‌, being thicker with larger bezels.

Overall, the Apple Watch Series 7 is a minor upgrade over the Apple Watch Series 6, offering larger displays and casing sizes, new color options, improved durability, the S7 chip, and faster charging. These features are mostly iterative improvements rather than major reasons to upgrade, and the Series 7 does not add any new functionality.

For Users of Older Devices or Those New to Apple Watch...

If you are on a budget and are not particularly attracted to the additional features of the Series 7, the Apple Watch Series 6 remains an option worth considering if you can get it for a good enough price. It shares many features with the newer model, such as the ability to take ECGs and monitor blood oxygen, but it should still be remembered that the Series 6 is already over a year old, and may not support software updates for as long as the Series 7.

For users who already have an Apple Watch Series 6, the Series 7 probably does not offer enough to warrant upgrading unless you particularly want a larger display, faster charging, or improved durability. The design changes and new features are iterative rather than transformative, and there are no new major capabilities, so many Series 6 users may prefer to wait a little longer to upgrade.

Pangalactic
Why on earth would you upgrade from 6? There is literally NOT A SINGLE substantial change.
Score: 32 Votes (Like | Disagree)

ChrisMoBro
Love the nuanced journalism here. The chip is exactly the same one but you’re falsely making out like it’s a new chip. Shame on you.
Score: 23 Votes (Like | Disagree)

subi257
After reading this, I guess I'll stay with my S6 44mm watch. Not really enough to upgrade, I like the larger screen, but that's about it.
Score: 21 Votes (Like | Disagree)

it should still be remembered that the Series 6 is already over a year old, and may not support software updates for as long as the Series 7.

As the S6 and S7 have the exact same chip (except the name) and mostly the same internals, it’s safe to say that the drop of software support for these two models will happen at the same time
Score: 17 Votes (Like | Disagree)

Populus
If you ask me: no, you shouldn’t update from the S6 to the S7.

Not only the SoC is the same, and they will probably lose support at the same time (giving the S7 one year less of “lifespan”) but the next year there will be a much more noticeable upgrade, with new and better SoC, and possibly the new design that Apple delayed at the last moment this year.
Score: 11 Votes (Like | Disagree)

haruhiko
It’s pre-order time this Friday and we still don’t have any ordering information in the Apple Store app. The whole launch of the Series 7 is so weird.
Score: 11 Votes (Like | Disagree)
Read All Comments