The Apple Watch Series 6 offers a number of compelling updates on last year's Series 5, offering a new S6 processor, a U1 ultra-wideband chip, and blood oxygen monitoring, for a price starting at $399. 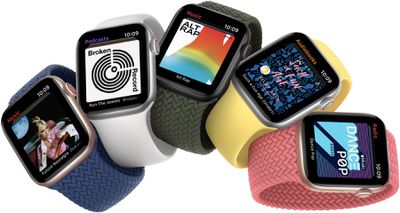 Although the Apple Watch Series 5 has now been discontinued by Apple, it continues to be available at many third-party resellers. Perhaps you are wondering if it is worth upgrading from a Series 5 to a Series 6, or are considering if the lower-cost Series 5 is a worthy introduction to the Apple Watch instead of the Series 6. You may also be using an older Apple Watch, and are looking to upgrade, but cannot decide if you should buy the Series 5 or the Series 6.

As these two models share many key features, including design, ECG functionality, and an always-on display, it may not be immediately obvious which model is better for you. Is it worth purchasing the slightly older model with fewer features to save money? Our guide helps you to answer the question of which of these two Apple Watch models is best for you.

With just one year between them as flagship Apple Watches, they share a majority of features. Apple lists these identical features of the two models:

Read on for a closer look at each of these aspects, and see what exactly both of the latest Apple Watch models have to offer.

Other than this feature, the high-resolution Retina displays themselves are the same between the two models. Unless you feel that you especially need to see your watch face in the clearest way at all times without raising your wrist, the Apple Watch Series 5's display will be more than adequate for your needs.

Only the Apple Watch Series 6 contains the U1 ultra-wideband chip. Apple says that the U1 on Apple Watch will "enable short-range wireless location to support new experiences, such as next-generation digital car keys," but it is as yet unclear what else the chip may offer.

The distance between two devices that support ultra-wideband can be measured precisely by calculating the time that it takes for a radio wave to pass between the two devices, with much more accuracy than Bluetooth LE and Wi-Fi.

Although Apple has increasingly been implementing the chip on its new devices, it has yet to unlock substantial new features. Apple has so far only used the technology to power a directional AirDrop feature in iOS 13, but it has suggested more exciting use cases in the future. This suggests that the U1's functionality on Apple Watch Series 6 may well be expanded.

Since the U1 chip currently has such few use cases, it is not worth getting the Apple Watch Series 6 simply because of it. Nevertheless, if you plan on keeping your Apple Watch for many years, the U1 chip will likely make it a much more future-proof model, due to the high chance that more functionality will come to it in the coming years.

Apple Watch Series 6 offers blood oxygen monitoring, a brand new health monitoring feature never seen before on the Apple Watch. The feature measures the oxygen saturation of the user's blood, so they can better understand their overall fitness and wellbeing. Oxygen saturation, also known as SpO2, represents the percentage of oxygen being carried by red blood cells from the lungs to the rest of the body, and indicates how well this oxygenated blood is being delivered throughout the body.

The Apple Watch Series 6 has a blood oxygen sensor on its rear with an array of four clusters of green, red, and infrared LEDs. They measure light reflected back from blood, and using an advanced custom algorithm, can determine blood oxygen saturation between 70 and 100 percent.

On-demand measurements can be taken using the Blood Oxygen app, and periodic background measurements are also taken, including during sleep. All data is visible in the Health app, and the user is able to track trends over time to see how their blood oxygen level changes.

However, Apple Watch Series 5 does share a large number of health monitoring features with the Apple Watch Series 6. Both models contain an electrical heart sensor to take electrocardiograms, or ECGs. They have electrodes built into the Digital Crown and an electrical heart rate sensor on the rear. With the ECG app, users touch the Digital Crown and after 30 seconds, receive a heart rhythm classification. It can classify if the heart is beating in a normal pattern or whether there are signs of Atrial Fibrillation (AFib), a heart condition that may lead to major health complications. All recordings, their associated classifications, and any noted symptoms are stored in the Health app in a PDF that can be shared with physicians.

Both models also have an optical heart sensor to monitor heart rate, and can give notifications about high and low heart rate, and as well as irregular heart rhythm. They also can perform emergency SOS, Fall Detection, and noise monitoring.

Both models of Apple Watch retain what Apple calls an "all-day" battery life of around 18 hours.

Since the battery life of both models is virtually the same, it is probably not worth favoring the Series 6 simply on the basis of faster charging and slightly improved battery usage during particular activities. The Series 6's battery and charging enhancements instead remain an indication of how the device offers a variety of small improvements over the Apple Watch Series 5.

The ‌Apple Watch SE‌ does not have an always-on display, ECG or blood oxygen monitoring, but it does contain the same S5 chip as the Series 5 and the same always-on altimeter as the Series 6.

If you were already siding with the Apple Watch Series 5, it may be worth exploring the lower-cost ‌Apple Watch SE‌. If you are looking for the most out of your Apple Watch and are particularly interested in health-monitoring features, the ‌Apple Watch SE‌ may not be suitable.

Alternately, if you are on a budget and are not particularly attracted to the additional features of the Series 6, the Apple Watch Series 5 remains an option worth considering. It shares many features with the newer model, such as the ability to take ECGs. However, it should be remembered that the Series 5 is already over a year old, and will likely not support software updates for as long as the Series 6. You should only consider the older Series 5 if the Series 6 is out of your price range.

The new ‌Apple Watch SE‌ should also factor into your decision, as it offers many of the same features of the Series 5 (and a few from the Series 6) at a discounted price.

How to Free Up Storage Space on iPhone and iPad

Thursday April 15, 2021 11:23 am PDT by Tim Hardwick
If your iPhone or iPad is full, there are several things you can do to claw back storage space. In this guide, we run through several options and methods available to free up storage on iOS devices. Keep reading to learn what they are. Every iPhone and iPad comes with a set storage capacity ranging from 16 GB to 512 GB for iPhone, and 16 GB to 1TB for iPad. While it's always a good idea to...
Read Full Article • 60 comments

Friday October 2, 2020 2:56 pm PDT by Tim Hardwick
With the arrival of watchOS 7, Apple introduced headline features for Apple Watch like Sleep Tracking and Handwashing Detection, but it also snuck in a bunch of lesser changes and improvements to the interface that are more likely to have gone under the radar, so we've collected some of our favorites here. To make the most of them, you'll need to make sure your Apple Watch is up to date with ...
Read Full Article • 36 comments

Friday April 30, 2021 12:06 pm PDT by Juli Clover
Apple is developing a next-generation version of the M1 Apple silicon chip, which will tentatively be called the "M2." The M2 is believed to be shipping in 2022, and current rumors suggest that it could be a replacement for the M1 that's destined for next-generation MacBook Air models. What We Know Apple in October 2021 unveiled the M1 Pro and the M1 Max, its newest Apple silicon chips that ...
Read Full Article

Thursday April 29, 2021 1:58 am PDT by Hartley Charlton
AirTag is Apple's newest product line, a small round disc used to track items using the Find My app. Yet Apple is not the first to offer item trackers of this kind. Tile has been making Bluetooth item trackers for almost a decade and is now AirTag's main competitor. As the two leading item trackers share a number of key features, it may not be immediately obvious which is better for your...
Read Full Article • 89 comments

Picking the Best Apple Watch to Buy in 2021

Monday June 8, 2020 4:59 pm PDT by Juli Clover
Thinking of buying an Apple Watch? The Apple Watch is a great health, fitness, and communication tool, but there's a lot to consider when making a purchase. You need to choose the case material and band, pick a GPS or cellular model, and decide whether to buy the latest Apple Watch or spring for a more affordable older model. This guide walks you through the different options you can...
Read Full Article