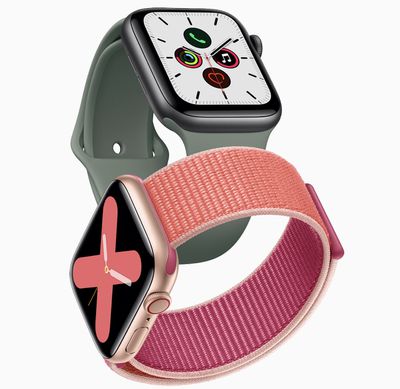 The always-on display allows the time and other important information to be visible at all times. Every watch face was optimized for the new display and to preserve battery life, featuring the ability to dim the screen when your wrist is down and return to full brightness with a raise or tap.

“We’ve seen Apple Watch have a meaningful impact on our customers’ lives and we’re excited to deliver even more capabilities with Apple Watch Series 5 and watchOS 6,” said Jeff Williams, Apple’s chief operating officer. “The seamless integration of new hardware and software delivers an enhanced experience that makes it even easier to stay active and connected to the people and information users care about.”

There are also updated location features that provide greater navigation tools, like the built-in compass and updated Maps app. The compass app provides heading, incline, latitude, longitude, and current elevation, and it can be added as a complication to the watch face.

Series 5 cellular models include international calls to emergency services, regardless of where the device was originally purchased or if the cellular plan was activated.

The new lineup also comes with a titanium case, and returning styles include stainless steel, aluminum, and ceramic. There are also the expected Apple Watch Nike and Apple Watch Hermès models.

With a new Apple Watch comes the latest updated to watchOS, which is watchOS6, including new health and fitness features like a Cycle Tracking app for women. There's a Noise app to understand the ambient sound levels in environments such as concerts, and Activity Trends to provide a long-term view of your activity patterns.


watchOS 6 also has dynamic new watch faces like Meridian, Modular Compact, and Solar Dial. Apple is also finally letting you customize exactly which Apple Watch case and watch band you buy from the get-go with Apple Watch Studio. With this, you can pick your preferred case and band combination when you initially purchase the Apple Watch Series 5.

benshive
I bet the people who complained about the Apple Watch not having an always on display are going to be here complaining about how this will affect battery life :rolleyes:
Score: 22 Votes (Like | Disagree)

crawfish963
No word on processor upgrades? Interesting. I doubt this will be enough to entice S4 owners.
Score: 13 Votes (Like | Disagree)

Low on testosterone or menopausal design, form does not follow function, it should be circular, aod that is old news in galaxy watches.

... is it that you have low testosterone levels and need external devices to provide it for you? The Apple Watch certainly doesn't need nor provide testosterone. Similarly, watches do not experience menopause. What are you on about?

Should be circular? Since when? For decades, watches had mechanical mechanisms with rotating hands that dictated mostly circular cases. That requirement is outdated. Smart watches present information, which fits better on a rectangular screen. Round is the exact opposite of "form follows function" for a smart watch - it's being round to be familiar to those who can't cope with a rectangular watch.

If galaxy watches suit you better, no one is stopping you from buying one.
Score: 9 Votes (Like | Disagree)

MrGimper
Always-on display, the watch forums will be dead now that complaint is negated.
Score: 9 Votes (Like | Disagree)

I feel like they could just include this on Series 4 with a software update....

Sure, if you want 4 hour battery life. They've switched to a different kind of screen that uses less power.
Score: 8 Votes (Like | Disagree)

Maybe if you wear this watch occasionally for fitness or workout it is fine, but for everyday watch it looks pathetic. Low on testosterone or menopausal design, form does not follow function, it should be circular, aod that is old news in galaxy watches. Come on apple, Steve Jobs should haunt you.

This is a terrible opinion. You should be ashamed to have expressed it publicly.
Score: 7 Votes (Like | Disagree)
Read All Comments