In April 2021, Apple revealed the second-generation Apple TV 4K, bringing high framerate HDR with Dolby Vision to the Apple TV for the first time and the A12 chip for improved performance, alongside a redesigned Siri Remote. The ‌Apple TV‌ HD was first released in 2015 and has remained in Apple's lineup since then as an entry-level option, and now it comes with the upgraded ‌Siri‌ Remote. 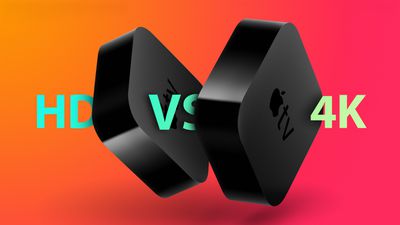 Should you consider purchasing the ‌Apple TV‌ HD to save money, or do you need the ‌Apple TV‌ 4K? Our guide answers the question of how to decide which of these two ‌Apple TV‌ set-top boxes is best for you.

The ‌Apple TV‌ HD and ‌Apple TV‌ 4K share the same design and a number of basic features such as HDMI and the redesigned ‌Siri‌ Remote:

There are a large number of meaningful differences between the ‌Apple TV‌ HD and ‌Apple TV‌ 4K that are worth highlighting, including their supported resolutions and processors.

Read on for a closer look at each of these aspects, and see what exactly both of the available ‌Apple TV‌ models have to offer.

With high frame rate support in ‌AirPlay‌, videos shot on the iPhone 12 Pro can be displayed in full 60-fps Dolby Vision on the ‌Apple TV‌ 4K. Apple is also working with video providers around the world, including FOX Sports, NBCUniversal, Paramount+, Red Bull TV, and Canal+, as they begin to stream in high frame rate HDR.

In order to make the most of the ‌Apple TV‌ 4K's better video capabilities, you will need to have an accompanying 4K TV with HDR. The video specifications of the ‌Apple TV‌ HD are sufficient for most older or lower-cost TVs, but for the best possible visual experience using technologies like 4K, HDR, and Dolby Vision, the ‌Apple TV‌ 4K is the better option, providing you have a relevant TV.

The second-generation ‌Apple TV‌ 4K features the A12 Bionic chip. The A12 Bionic chip powered the iPhone XS, XS Max, and XR in 2018, as well as the 2019 versions of the iPad Air and iPad Mini, and the 2020 entry-level ‌iPad‌.

The A8 chip is considerably older and was first introduced with the ‌iPhone‌ 6 and ‌iPhone‌ 6 Plus in 2014. The A12 is a 2.49 GHz hexa-core chip and is markedly more powerful than the A8, which is a 1.5 GHz dual-core chip.

While processing power is not an absolute priority with a set-top box, the ‌Apple TV‌ 4K's more recent A12 chip will be much more capable than the A8. Whether it comes to playing games, app launch speeds, or simply general responsiveness, the A12 is likely to be much more snappy.

Through progressive updates to tvOS, the A12 will guarantee better performance over time, and the ‌Apple TV‌ 4K's A12 will be much more future-proof than the A8 in the ‌Apple TV‌ HD.

If you plan on downloading a large number of applications or storing lots of content on the ‌Apple TV‌ itself, then the ‌Apple TV‌ 4K with 64GB of storage will be the best option.

As most media content on the ‌Apple TV‌ is streamed and not stored on the device itself, the amount of storage will not be particularly important to most buyers.

The new ‌Siri‌ Remote features a clickpad control that offers five-way navigation for better accuracy and is also touch-enabled for fast directional swipes. The outer ring of the clickpad supports an intuitive circular gesture that turns it into a jog control.

The new ‌Siri‌ Remote also has a power button that controls a TV's power directly, and another for mute. The ‌Siri‌ button has also been relocated to the side of the remote for convenience.

Although the new ‌Siri‌ Remote was introduced with the second-generation ‌Apple TV‌ 4K, Apple includes it with both of the current ‌Apple TV‌ 4K and ‌Apple TV‌ HD models, so users need not choose one model over the other to get the better remote.

Even if you cannot take advantage of the ‌Apple TV‌ 4K's better video and audio capabilities, you will receive a faster processor, more RAM, and faster connectivity. Likewise, users with an HD TV and a basic audio set-up may upgrade their devices in the future, in which case the ‌Apple TV‌ 4K would be able to remain and make use of any upgraded hardware.

Since the second-generation ‌Apple TV‌ 4K is a 2021 model, it is six years newer than 2015's ‌Apple TV‌ HD and will be much more long-lasting, especially due to its faster processor and added memory.

The only people who should consider the ‌Apple TV‌ HD are individuals on a strict budget, those with no intention of upgrading their setups, and those with no interest in technologies like Ultra-HD 4K, HDR, or Dolby Atmos.

For standard HD, SDR TVs, and basic audio setups, the ‌Apple TV‌ 4K is greatly limited by the video and audio specifications of the hardware connected to it. The ‌Apple TV‌ HD may also appear to be a good option for existing ‌Apple TV‌ users looking to buy an additional ‌Apple TV‌ for another room for activities such as Apple Fitness+.

If you are on a strict budget and the $30 difference makes that much of a dent in your wallet, get a $29 roku instead.
Score: 56 Votes (Like | Disagree)

nwcs
I would appreciate a detailed comparison of the first gen 4K and the new second gen one. I gather that there probably aren’t many enhancements but I’m sure many people are considering an upgrade as well.
Score: 47 Votes (Like | Disagree)

Rychiar
why is the HD even for sale anymore... let alone at such an absurd price. im sure ya could buy the last 4k one for less than 150
Score: 29 Votes (Like | Disagree)

My android-based Sony TV not having a direct connection to my home network/internet is worth the price of admission, alone. Not even for its built-in AirPlay.

Just not going to let that happen, even though it is certainly possible.

Not to mention a lot of the TVs have a slow and clunky OS. Not saying tvOS is perfect but it's better than what's on most smart TVs.
Score: 27 Votes (Like | Disagree)

casperes1996
This article could've been as short as "If you're considering the Apple TV HD... Don't. Just get the 4K model - last gen used if price is a major concern"
Score: 24 Votes (Like | Disagree)

Seriously, I don’t see why anyone should buy these things if you already own a high-end TV.

Maybe they should add Safari to tvOS. This will probably attract a lot of buyers.

My android-based Sony TV not having a direct connection to my home network/internet is worth the price of admission, alone. I won't even use Sony's built-in AirPlay.

Just not going to let that happen, even though it is certainly possible.
Score: 20 Votes (Like | Disagree)
Read All Comments