Google is continuing on with its #GetTheMessage campaign attempting to convince Apple to adopt the RCS messaging protocol, this time taking out a large New Year's-themed ad at Harmon Corner in Las Vegas. 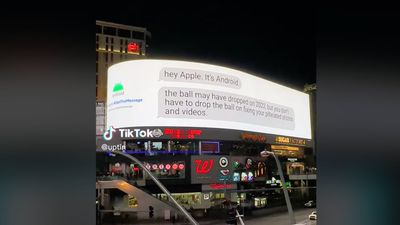 The digital billboard urges Apple not to "drop the ball" on fixing its "pixelated photos and videos."

the ball may have dropped on 2022, but you don't have to drop the ball on fixing your pixelated photos and videos. Here's some code to get the ball rolling...

After the short message, the billboard scrolls through RCS code, ending with a plea to customers to "Help Apple #GetTheMessage," the hashtag that Google has been using for the campaign.

Google launched the "Get the Message" push back in August with a full website highlighting the benefits of RCS, which include support for higher resolution photos and videos, audio messages, and bigger file sizes, along with improved encryption, cross-platform emoji reactions, and more reliable group chats across different devices.

Google has been pestering Apple to adopt RCS for well over a year through the website, pleas on Twitter, billboards, and more, but Apple has made no acknowledgement of Google's efforts. In fact, Apple CEO Tim Cook recently said that RCS is not a priority. "I don't hear our users asking that we put a lot of energy in on that at this point," said Cook.

alexandr
Hey Google, focus on your own balls...
Score: 103 Votes (Like | Disagree)

macdaddy43
It is bad for the consumer when large corporations like Apple refuse such a simple fix in the name of profits. Do I blame them? I can't say that I do, it makes sense that Apple doesn't have any interest in fixing texting. But at the same time, I can't get behind something that ultimately only hurts the consumer, and this does.

Texting iOS to Android is horrible but it doesn't have to be that way, and it shouldn't.
Score: 68 Votes (Like | Disagree)

sw1tcher
I can't help but wonder had Apple designed iMessage to play nicer with other platforms in the beginning that iMessage usage would be greater in other countries instead of WeChat, WhatsApp, Telegram, and Facebook Messanger
Score: 53 Votes (Like | Disagree)

And this is why Apple never implemented, and never will. iMessage is still super encrypted and is the gold standard for encrypted messaging.
Score: 43 Votes (Like | Disagree)

Apple talks a lot about Privacy as a differentiator for their devices. They should live up to it and start messaging through RCS when the other person is using it on their end.

Doesn't matter who invented it. End-to-end encryption can occur via RCS, and neither Apple nor Google nor Carriers would have access to your messages.

Apple insisting on sending messages via SMS isn't what a Privacy-concerned company would do.
Score: 34 Votes (Like | Disagree)
Read All Comments