Dell is looking to take head-on Apple's $4,999 Pro Display XDR with a new 32-inch 6K UltraSharp display that has a built-in 4K webcam, a variety of ports, and an included stand that rotates, swivels, tilts, and more. 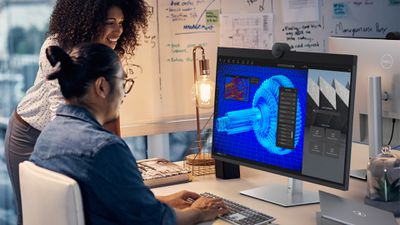 The new "game changer" display was announced this week as part of CES and is the world's first 6K display with IPS Black panel technology, according to Dell. With the new IPS panel, the 32-inch 6K UltraSharp delivers "high contrast and deeper blacks." In actual specs, the display is 6,133 by 3,456 pixels with 223 PPI (pixels-per-inch), slightly higher than Apple's Pro Display XDR. The Pro Display XDR is 6,016 by 3,384 pixels with 218 PPI (pixels-per-inch).

On the back of Dell's 32-inch 6K UltraSharp display, there are a variety of ports, including Thunderbolt 4 with up to 140W of power delivery, USB-A, ethernet, HDMI, and DP 2.1. On the front of the display, there is also access to two USB-C and one USB-A port through a pop-out compartment, providing quicker access to connect accessories and peripherals.

Unlike the Pro Display XDR which does not come with a stand, Dell's display has a built-in stand that can swivel, tilt, rotate, and move the display higher or lower depending on user preference. The display also has a built-in 4K webcam that uses AI to improve image quality and keep users in the frame during video calls.

At CES this week, Samsung also revealed a 27-inch 5K display that will compete with Apple's Studio Display.

mpinusa
This and the new Samsung ones announced look awesome. My fetish in only buying Apple gear is well and truly at an end - they don't create the best gear any more and their prices are insulting.
Score: 37 Votes (Like | Disagree)

Xenobius
Everything would be great except for one small detail:

Ice-Cube
Did Dell hire Mike Wazowski to design this?

ThomasJL
Please, no webcams and no speakers. Let me save money on the display by not including those, and let me use that money toward getting a webcam and speakers with the specs that I prefer.
Score: 31 Votes (Like | Disagree)

Michael Scrip
I'd rather attach an external webcam when I need it... instead of looking at that large top bezel ALL THE TIME.

LawJolla
There's ugly. And then there's that thing.

Traditionally Dell makes great monitors, spec for spec. And any pressure on Apple is good pressure.

But. Wow.
Score: 26 Votes (Like | Disagree)
Read All Comments