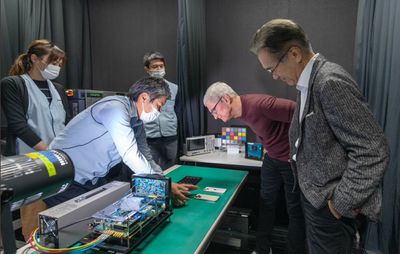 In a tweet posted during his visit to Sony's camera development facility in Kumamoto, Japan, Cook acknowledged the company's successful partnership with Apple to create "the world's leading camera sensors for ‌iPhone‌," and thanked the team at the facility for showing him around.

Apple doesn't usually reveal the specific makers of the hardware components that it uses in iPhones, but its use of Sony camera hardware has long been known by close followers of the company's supply chain.

Apple reportedly used Sony's camera sensor for the iPhone 6, and subsequent hardware teardowns by the likes of iFixit have identified Sony-made components in successive ‌iPhone‌ models.

Cook's tweet suggests Apple's partnership with Sony remains strong, and rumors to that effect already signal the Japanese company's contributions to future Apple products. For example, According to a November report from Nikkei, next year's iPhone 15 models will be equipped with Sony's newest "state of the art" image sensors.

Compared to standard sensors, Sony's image sensor doubles the saturation signal in each pixel, allowing it to capture more light to cut down on underexposure and overexposure. Nikkei said that it is able to better photograph a person's face even with strong backlighting.

We’ve been partnering with Sony for over a decade to create the world’s leading camera sensors for iPhone. Thanks to Ken and everyone on the team for showing me around the cutting-edge facility in Kumamoto today. pic.twitter.com/462SEkUbhi — Tim Cook (@tim_cook) December 13, 2022

Apple is working on a periscope telephoto lens that will improve the ‌‌iPhone 15‌‌ Pro's optical zoom capabilities, allowing for up to 10x optical zoom to match some Android smartphones that are on the market. The Sony image sensor technology would likely be used for the Wide camera that Apple considers the ‌iPhone‌'s "main" camera as Apple typically uses different technology for each lens.

Also for next year, Sony is expected to supply Apple with an OLED on silicon (OLEDoS) – also known as micro-OLED – display for the company's first-generation mixed-reality headset.

Kierkegaarden
Interesting that Tim would visit Japan this close to the holidays. Given the rumor of Sony being involved with the development of the display in the AR/VR project, this makes me wonder if that has something to do with it. Regardless, it is neat to see two innovative companies working together instead of being enemies.
Score: 13 Votes (Like | Disagree)

As a user of Sony phones before I defected to iOS I can’t help but wonder why it’s therefore taken this long to change from a 12 megapixel sensor, when Sony had some excellent 23 megapixel sensors in their Z5 range back in 2015

if you go back and look at your 2015 photos next to modern day phone images, your excellent photos won't look so excellent all of a sudden.
Score: 11 Votes (Like | Disagree)

Because photo quality can't be measured in megapixels alone. It's equally important how accurately each sensor measures the light for each pixel. And accuracy rises with more light on fewer bigger pixels.
Score: 8 Votes (Like | Disagree)

timber
I wonder if Tim is paying his blue tick through the site to save those 3 bucks.
Score: 7 Votes (Like | Disagree)

As Sony becomes more of a premium supplier, this makes sense. If Sony becomes a supplier to iPhone only for sensors, it makes a brand difference in a part that Apple is simply even with Samsung now.

It's likely only Sony could pull off a proper optical stack for AR today.

Sony have been the main supplier of camera sensors for many phone brands for over a decade,not just for Apple but also for Samsung phones and others.
It’s their expertise.
They even make camera sensors for Nikon DSLR cameras.
the same way LG and Samsung produce display panels for Apple products and OLED panels for Sony,Philips and Panasonic TVs.
Score: 4 Votes (Like | Disagree)
Read All Comments