At the Wall Street Journal's Tech Live event, Apple's Craig Federighi and Greg Joswiak talked about a wide range of topics, including USB-C on iPhone, why iPadOS still lacks a calculator app, iMessage on Android, and more. 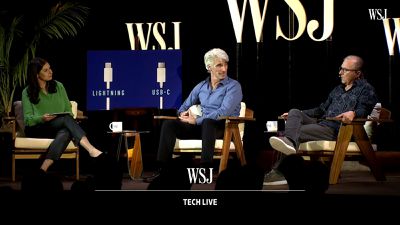 The EU is forcing many consumer electronic devices, including the ‌iPhone‌ and AirPods, to move to USB-C by the end of 2024. The new rule will directly impact Apple, which still uses the Lightning connector on the ‌iPhone‌ and AirPods. Speaking today at the event, Joswiak said Apple will "have to comply" with the new rule, indirectly confirming the ‌iPhone‌ will switch to USB-C in the future. Reports suggest Apple is testing USB-C on iPhone 15 models destined for release next fall.

Federighi and Joswiak spoke about the pace of innovation on the ‌iPhone‌, including whether or not smartphones have become boring and if the ‌iPhone‌ needs an update every year. "People are very excited by the new iPhones," Joswiak said, referencing new features on the iPhone 14 Pro, including the new 48-megapixel camera and Dynamic Island. "We always have a ton of stuff that we've got to get out," Federighi said. "We've been working on things for years and years, and there are a pipeline of things we believe that will better help our customers."

Speaking about why iPadOS still lacks a native calculator app, Joswiak said, "There are a ton of them. Go to the App Store." "I use third-party apps," he continued when pressed by the ‌Wall Street Journal‌'s Joanna Stern on what the two executives do when they want to calculate something on their iPads.

"I'm not aware of it shipping," Federighi jokingly said in response to the question. "If we're going to enter a market and go down the road of building an application, we have to be in it in a way that's going to make a difference, that we'll have a lot of customers, and have a great experience," Federighi said.

"If we just shipped an app that really didn't get critical mass on other platforms, what it would have accomplished is it would have held us back in innovating in all the ways we want to innovate in Messages for our customers and wouldn't have accomplished much at all in any other way," Federighi explained. iMessage on Android seemed like a "throwaway" that "was not going to serve the world," he concluded.

During their interview, Federighi and Joswiak also spoke about Apple's transition to Apple silicon on the Mac, Apple's stance on privacy, and Apple's return to in-person work and the controversy around it. The full 35-minute interview can be watched through a replay of the live stream on the ‌Wall Street Journal‌'s Twitter account.

Speaking about why iPadOS still lacks a native calculator app, Joz said, "there are a ton of them. Go to the App Store." "I use third-party apps," he continued when pressed by the Wall Street Journal's Joanna Stern on what the two executives do when they want to calculate something on their iPad.

Ha! Yeah ok. by this logic, why the hell did they finally add a weather app when there’s so many weather apps on the App Store?
Score: 66 Votes (Like | Disagree)

Ha! Yeah ok. by this logic, why the hell did they finally add a weather app when there’s so many weather apps on the App Store?

By this logic why do we have a calculator app on the iPhone? If we could just go grab one from the App Store? Lol. Hilarious the excuses they have.
Score: 50 Votes (Like | Disagree)

temende
I feel like most of these answers were pretty predictable/straightforward. Unfortunately that's just how most interviews with Apple execs go.
Score: 36 Votes (Like | Disagree)

thank you MacRumors for clarifying
Score: 31 Votes (Like | Disagree)

blazerunner
I wonder how Craig Federighi feels about lying through his teeth? If only someone called him out on it.
Score: 25 Votes (Like | Disagree)
Read All Comments