We're right around the midpoint of October now and we've yet to see any signs of an Apple media event to introduce new iPad and Mac hardware, so it's looking increasingly likely that rumors of the announcements coming via press release rather than an event are correct. The last week of the month may end up being fairly busy with iPadOS 16 and macOS Ventura releases and potentially some of that rumored new hardware. 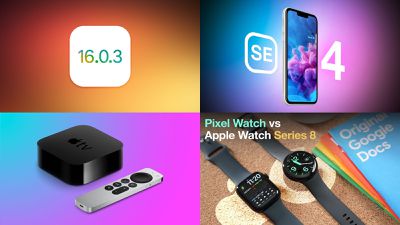 Other news this week included the release of iOS 16.0.3, delivering a number of important bug fixes while we await the larger iOS 16.1 release before the end of the month. We also shared some rumors about the next-generation iPhone SE and Apple TV, while we took a look at Google's new Apple Watch competitor, the Pixel Watch, so read on for all the details on these stories and more!

watchOS 9.0.2 is also out for the Apple Watch and fixes bugs related to the microphone, Spotify streaming, and more.

In other software news, iPadOS 16.1 is expected to be released in the final week of October. iOS 16.1 and macOS Ventura will likely be released around the same time. Rumors suggest Apple plans to announce new iPad Pro and Mac models before the end of the month too.

The fourth-generation iPhone SE will feature a 6.1-inch LCD display with a notch, according to well-connected display industry analyst Ross Young.

While the new iPhone SE is expected to be similar to the iPhone XR from 2018, it is unclear if the budget device would be equipped with Face ID or have a Touch ID power button like the latest iPad Air and iPad mini models. The device is currently rumored to launch in 2024.

Five New Features Coming to Your iPhone With iOS 16.1

iOS 16.1 is expected to be released later this month with several new features for the iPhone.

We've rounded up five new features coming to your iPhone with iOS 16.1, including Live Activities support in third-party apps and more.

It's likely that iOS 16.2 will be released later this year with even more features that Apple has already announced.

Two reputable sources in analyst Ming-Chi Kuo and Bloomberg's Mark Gurman have both claimed that a new Apple TV could be released later this year.

With a new version of the Apple TV potentially on the horizon, we have put together a list of four rumored features and changes for the streaming box, such as an updated version of the Siri Remote.

The current Apple TV was released in May 2021.

Google last week unveiled the Pixel Watch, a Wear OS-based smartwatch that has a round display and a suite of health tracking features.

In a recent video on our YouTube channel, we shared a hands-on comparison of the Pixel Watch and the Apple Watch Series 8. Keep in mind that the Pixel Watch is currently not compatible with the iPhone and instead requires an Android smartphone.

Ladybug
Apple seems to have an obsession with only offering large phones now. With so many large phones already I truly don’t get it. And yes, 6.1 is large to me.
Score: 4 Votes (Like | Disagree)

saulinpa
A smaller SE would be welcome. The original 4" screen was nice for a pocket phone.
Score: 3 Votes (Like | Disagree)

Apple seems to have an obsession with only offering large phones now. With so many large phones already I truly don’t get it. And yes, 6.1 is large to me.

Agreed, 6.1” is already gigantic to me. I can’t understand this forum’s collective preference for 6.7” monstrosities.

The mini form factor and size are absolutely perfect for me.
Score: 3 Votes (Like | Disagree)

reddeliciousapple
I currently have an iPhone 11 and was planning to upgrade this year but the pricing of the 14s in Europe is very high. If the iPhone SE 4 is based on the same body as the 11/XR but with updated internals and main camera, I would be very tempted to get one.
Score: 2 Votes (Like | Disagree)

JosephAW
I read that headline as iPhone 4SE ;)
Score: 2 Votes (Like | Disagree)

The fourth-generation iPhone SE will feature a 6.1-inch LCD display ('https://www.macrumors.com/2022/10/09/iphone-se-4-to-feature-6-1-inch-display-with-notch/') with a notch, according to well-connected display industry analyst Ross Young.

They should have it come out as another larger SE model in a few months. Apple needs to offer a line of less expensive 5G iPhones of good quality with less expensive cameras utilized.
Score: 2 Votes (Like | Disagree)
Read All Comments