One of the Wallet features introduced in iOS 15 last year was support for home keys, which lets users add digital keys for compatible HomeKit door locks to the Wallet app on their iPhone and Apple Watch. 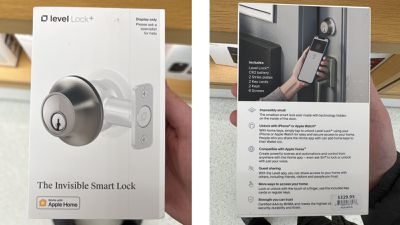 Available to begin with in a satin nickel color, with a matte black model arriving soon, the Lock+ system is an updated version of its existing HomeKit-compatible Level Lock - Touch Edition which includes support for key cards.

With the addition of home key support, Lock+ users can take advantage of their Apple device's NFC connectivity to quickly unlock their home by simply bringing their device close to the lock.

As expected, the new Level Lock+ with HomeKey is now on sale at Apple stores. https://t.co/fqvCY2nR9B — Mark Gurman (@markgurman) October 14, 2022

After being added as an accessory in the Home app, the Lock+ can function in Express Mode, which allows you to unlock the door just by holding your ‌iPhone‌ or Apple Watch near the lock, or alternatively it can be set up to require Face ID or your passcode after holding your device near the lock.

The new Lock+ with home key support comes with a strike plate, CR2 battery, six screws, two keys, two key cards, and a long bolt cap. Priced at $329.95, Level Lock+ is only available in Apple retail stores for now, but a listing on Apple's online store is expected to arrive on October 21, when the matte black edition will also be available to order.

mnsportsgeek
I like the basic design, but that's expensive for a door lock.
Score: 32 Votes (Like | Disagree)

GMShadow
You know, I'd have considered this for my parents as a gift...then I saw the $329.95 tag in the second photo.

Are enough people really gonna spend $330 on a door lock in this economy to make stocking this worth it?
Score: 20 Votes (Like | Disagree)

I love how we have an energy crisis and a climate crisis and with inflation and people’s money not going as far and people having to spend more for heating and gas and food that we are just converting our entire lives to tech and things that require energy and being connected and also expensive to replace when a battery dies or it becomes obsolete or a company decides to stop supporting something. We’ve gone from convenience to burden. We are replacing things that used to last 30 years with things they last 5. Im tired of it.

The Level Lock runs on one AA battery that gets replaced like once a year. Relax.
Score: 14 Votes (Like | Disagree)

erikkfi
A horseless carriage? No one's ever going to want that.
Score: 14 Votes (Like | Disagree)
Read All Comments

Friday October 21, 2022 11:33 am PDT by Juli Clover
Smart lock maker Level today announced the official launch of its Level Lock+, which is now available for purchase from Apple's online store. The Level Lock+ has been in Apple retail stores since last week as part of a soft launch, but those who do not live near a store location can now order it online. Level Lock+ is an Apple exclusive product, as it is designed to work with the Home Keys...
Read Full Article • 89 comments

Thursday March 31, 2022 7:29 am PDT by Joe Rossignol
Schlage today released its Encode Plus smart lock with support for Apple's home keys feature in the Wallet app on the iPhone and Apple Watch. The smart lock is available in a variety of finishes at The Home Depot, Lowe's, and Build.com for $300 in the United States. Apple's home keys feature lets you add a key card to the Wallet app, eliminating the need to use a physical key. Upon doing so, ...
Read Full Article • 164 comments

Thursday December 1, 2022 11:49 am PST by Joe Rossignol
In 2020, Apple introduced a digital car key feature that allows users to unlock and start a compatible vehicle by bringing an iPhone or Apple Watch near the driver-side door. The car keys are stored in the Wallet app in the same way that a credit card is. The feature is currently limited to select BMW, Kia, and Genesis vehicles. Apple has been working with the Internet Engineering Task Force ...
Read Full Article • 30 comments

Friday November 25, 2022 11:41 am PST by Juli Clover
MacRumors videographer Dan shares videos on the MacRumors YouTube channel on a regular basis, and this week, he thought he'd give viewers a look at his preferred Lock Screen and Home Screen designs, along with his favorite apps and games. Subscribe to the MacRumors YouTube channel for more videos. Give Dan's video a watch and then tell us in the comments below about your own favorite apps,...
Read Full Article • 42 comments

iOS 16.2 for iPhone Expected to Launch in December With These 8 New Features

Wednesday November 16, 2022 8:32 am PST by Joe Rossignol
Apple plans to release iOS 16.2 in December, according to Bloomberg's Mark Gurman and a report about the update enabling 5G support in India. The update remains in beta testing for now, with many new features and changes already uncovered. iOS 16.2 introduces a number of new features, including Apple's new whiteboard app Freeform, two new Lock Screen widgets for Sleep and Medications, the...
Read Full Article • 43 comments

Sunday September 11, 2022 7:53 am PDT by Joe Rossignol
Apple released iOS 16 on Monday, September 12 as a free software update for the iPhone 8 and newer. iOS 16 includes plenty of new features, ranging from a customizable Lock Screen to the ability to temporarily edit or unsend iMessages. To install iOS 16, open the Settings app on your iPhone and tap General → Software Update. After you update your iPhone to iOS 16, check out our list of six ...
Read Full Article • 157 comments

Thursday December 8, 2022 2:45 am PST by Sami Fathi
Apple yesterday announced that end-to-end encryption is coming to even more sensitive types of iCloud data, including device backups, messages, photos, and more, meeting the longstanding demand of both users and privacy groups who have rallied for the company to take the significant step forward in user privacy. iCloud end-to-end encryption, or what Apple calls "Advanced Data Protection,"...
Read Full Article • 128 comments