New renders of the upcoming Apple Watch Pro have given us the best look yet at what's expected to become the newest high-end Apple Watch, featuring an all-new design, a larger and flat display, and a new physical button. 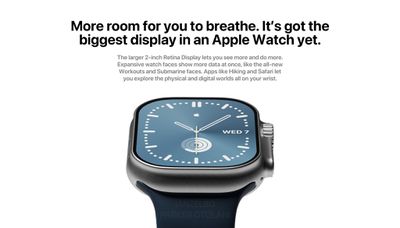 The new renders, created by concept designer Ian Zelbo in collaboration with Parker Ortolani, are based on CAD renders of the Apple Watch Pro shared yesterday. Until yesterday, little was known about the Apple Watch Pro's expected design other than to say it would be more rugged and durable for athletes, hikers, runners, and more.

Fitting with its more rugged look and feel, the Apple Watch Pro features all-new protruding housing for the Digital Crown and the Side Button. Both are housed in a mold on the right side of the watch that protrudes outwards, which could make them more easily accessible. The Digital Crown itself is also being redesigned to feature more prominent indents.

On the left side of the watch, the Apple Watch Pro is expected to feature an all-new physical button similar to the Side Button. The button is rumored to be configurable to a user's liking. It could be customized to open watchOS apps, begin specific workouts, or even quickly run shortcuts without navigating the watch itself.

Changes coming to watchOS 9 that show additional on screen
The new watch faces could have room to display metrics from workouts and health data gathered by the watch. The new watch faces come in addition to improvements made in ‌watchOS 9‌ that seem tailored towards a larger Apple Watch, such as refinements during Workouts that show additional metrics all in one screen.

omgneal
I miss the days where the Apple Events were still a surprise. They still get us occasionally but seems we know most everything beforehand now. I guess I could stay off of the web more.
Score: 42 Votes (Like | Disagree)

incoherent_1
“And that, young lad, is the story of how the term ‘Pro’ lost what little meaning it had left…”
Score: 33 Votes (Like | Disagree)

btrach144
That’s one ugly watch. I do admit, Johnny Ive got one thing, and that is making an attractive smart watch.

This is a butchering of his iconic design. Sad day if true.

edit: I wonder how many ppl downvoting me are Apple engineers...
Score: 33 Votes (Like | Disagree)

fel10
That bump on the side is kind of fugly. Not gonna lie
Score: 30 Votes (Like | Disagree)

WWPD
Looks like we're getting close to the pip-boy.

macsplusmacs
I'll just wait a day and see for myself.
Score: 27 Votes (Like | Disagree)
Read All Comments