Apple today removed 15 games from Apple Arcade, just over two weeks after it listed the first batch of titles set to leave the subscription service due to developer contract expirations. 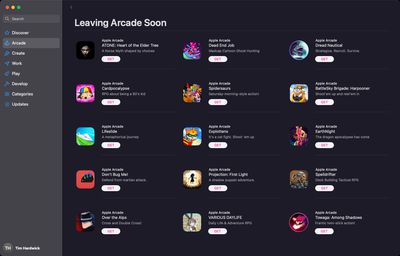 On July 18, Apple added a section to the Arcade area of the App Store titled "Leaving Arcade Soon" and listed the games that would be removed, but it did not specify when they would be gone.

That section of the ‌App Store‌ has now been taken down, and the titles that were included in the first batch no longer show up in a casual search of the Store. Games that have gone from ‌‌Apple Arcade‌‌ include Spelldrifter, Projection: First Light, Lifeslide, EarthNight, Cardpocalypse, Dead End Job, and more.

Apple says in a support document that users who downloaded a game before it was removed from ‌Apple Arcade‌ can continue to play the game for "at least two weeks after," suggesting the titles will remain playable until at least August 16 and possibly beyond then.

After such a time, users who launch an ‌Apple Arcade‌ game that is no longer playable will receive a "No Longer Available" message.

Apple says that after a game has been removed from ‌Apple Arcade‌, the developer might choose to make their game available on the ‌App Store‌ for all users, although the game may differ from the version offered on ‌Apple Arcade‌.

If a developer chooses to allow users to load their saved progress in the ‌App Store‌ version of the game, users can continue playing right where they left off in the ‌Apple Arcade‌ version. Otherwise, users must start the game over again.

A source informed MacRumors that when ‌‌Apple Arcade‌‌ first launched, Apple signed three-year deals with a number of developers, and some of these contracts are apparently nearing expiry and not being renewed, which is why the games have been removed.

benedetti
You'll own nothing and be happy...
Score: 36 Votes (Like | Disagree)

So you’re 67% into a game, then wake up to find that you have to buy the game just to complete it…

Similar to if you're 67% of the way through a series and Netflix removes the series. Now you have to go buy the DVD of it or a find a digital copy to buy somewhere.

This isn't new or weird for a subscription service.
Score: 29 Votes (Like | Disagree)

A cheap service for throwaway entertainment.
Score: 21 Votes (Like | Disagree)

Apple Knowledge Navigator
So you’re 67% into a game, then wake up to find that you have to buy the game just to complete it…

ksec
But Macrumors comment's told me Apple is / was going to take over the Gaming world with Apple Arcade when they launch. Just like how Apple Music was suppose to annihilate Spotify, or Apple TV destroying Disney + and Netflix!
Score: 11 Votes (Like | Disagree)

So you’re 67% into a game, then wake up to find that you have to buy the game just to complete it…

No different to what xbox and PS does with their services
Score: 10 Votes (Like | Disagree)
Read All Comments