Samsung today shared the official trailer video for its upcoming "Unpacked" event that will see the debut of the next-generation foldable smartphones, including the Galaxy Z Fold 4 and the Galaxy Z Flip 4.


The Unpacked event is set to take place on Wednesday, August 10 at 9:00 a.m. Eastern Time, and Samsung is already taking reservations for the as-of-yet unannounced smartphones. "Find out how the next Galaxy is greater than phones now, and get ready to unfold your world of greater experiences at Samsung Unpacked," reads the tagline for the event teasing the new devices.

Rumors suggest the Galaxy Z Fold 4 will have an updated design with a single hinge design instead of the double hinges of the prior-generation Samsung foldable phones. The new hinge will be smaller for a thinner and lighter design, and the smartphone will continue to fold like a book. 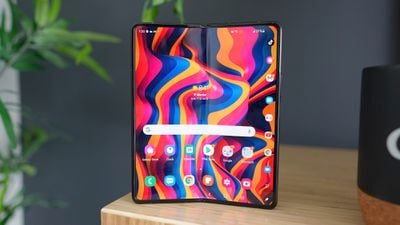 The Z Fold 4 is expected to continue to feature a 7.6-inch interior display with a 120Hz refresh rate, and it could have an under-display fingerprint sensor instead of a fingerprint sensor at the right side of the device. Upgraded cameras are coming, including a 10-megapixel telephoto sensor with 3x optical zoom, a 50-megapixel wide-angle camera, and a 12-megapixel ultra-wide camera. The Galaxy Fold 3 was priced at $1,800, and display analyst Ross Young says that the Fold 4 could get a small price cut.

As for the Galaxy Z Flip 4, it will continue to feature a 6.7-inch display that folds out vertically, but according to Young, it will have a larger 2-inch cover display. Not much else is known about the Z Flip 4, but camera improvements are possible, as are battery life improvements and new color options. Both new smartphones are expected to run the latest Qualcomm Snapdragon 8 Plus chips.

Samsung has been making foldable devices since the 2019 introduction of the Galaxy Fold, and the company has several years of experience with various design improvements and iterations.

Apple has yet to debut a foldable iPhone, though rumors suggest there are prototypes in the works. Right now, work is said to be in the early stages, and Apple has considered several foldable screen sizes, including one that unfolds to a size similar to the 6.7-inch iPhone 13 Pro Max and others in the eight to nine inch range.

Rumors about Apple's foldable design have been all over the place, with some suggesting an invisible hinge and others pointing toward a two-display design with a visible hinge. There's also been a rumor of a foldable ‌iPhone‌ with a clamshell design similar to the Galaxy Z Flip. Multiple sources indicate that 2025 is the earliest that we might see a foldable ‌iPhone‌, so there's plenty of time for Apple's plans to change and evolve.

For more on what we know about a possible foldable ‌iPhone‌, check out our dedicated foldable iPhone guide. Apple is also rumored to be working on a larger-screened foldable iPad.

Danoc
The fourth generation will be greatly improved: it will break in 18 months instead of 12 months.
Score: 29 Votes (Like | Disagree)

contacos
what I hate about these good ideas is the weird aspect ratio they decide to use. Too awkward for a smartphone yet too small as a tablet. It’s just too narrow and how many apps are actually being updated to fit / take advantage of these screens? Can’t imagine a lot
Score: 21 Votes (Like | Disagree)

Lets see your trailer and compare ?

Kylo83
these are a gimmick
Score: 12 Votes (Like | Disagree)

LoveToMacRumors
omg that trailer is one of the worst i've seen
Score: 12 Votes (Like | Disagree)

"Flex and Flat" on another level by Samsung!

Competition is a good thing. Let's see what Samsung has been working on before iPhone 14 debuts.

Samsung is making iphones look like dinosaurs. I don't care what anyone says, foldables are the next decade and Apple is way behind.
Score: 11 Votes (Like | Disagree)
Read All Comments