Apple today continued with the launch of its annual "Back to School" promotion, debuting back to school deals in most countries in Europe, some countries in Asia, the Middle East, and Mexico. 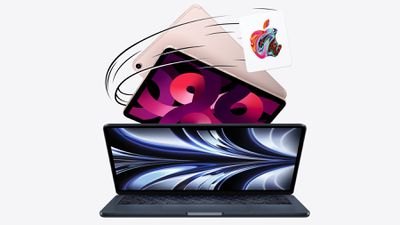 Higher education students and educators in most countries can get an Apple gift card with the purchase of select Macs and iPads, which is the same deal that went live in the United States and Canada in June, while in other countries, Apple is offering AirPods. In the UK, gift cards valued at up to £120 are available, and in other European countries, the amount tops out at €150.

In Mexico, Turkey, Czech Republic, Belgium, the United Arab Emirates, Hong Kong, and China, Apple is not providing a gift card, and is instead giving EDU customers a set of AirPods with the purchase of a new iPad or Mac. In countries where AirPods are the Back to School option, Apple is offering second-generation AirPods for free, but customers can upgrade to third-generation AirPods or AirPods Pro for an additional fee.

Apple is providing its standard educational discounts, and students are able to get lower prices on Macs and iPads through the EDU store in each country. Students are also eligible for AppleCare+ at a 20 percent discount.

Apple's Back to School promotion requires verification through UNiDAYS in many countries, with full terms and conditions available on the promotional pages for Apple's country-specific websites.

Apple's Back to School Promotion will last through October 20, 2022 in most of the above listed countries, but it does end in September in some locations, such as Hong Kong and China.

That savings that you see is just a gimmick, you are paying for it….

To make it easier.. the first pic is the precious order I made, 3 days ago!!!


If they charged me for the GIFT CARD, as they did..

WHERE IS THE BLODDY DEAL???

It ia just a gimmick!!!! The only thing they managed me to do is to commit spending more than I would have and lose 3 days in delivery time.

You've literally just posted a screenshot with "Savings -£120" on it. That's the discount for the card. Hence the card is free with the laptop.

I'm going to guess it's not a mathematics course you are doing!
Score: 9 Votes (Like | Disagree)

If you paid for the gift card that means

So yes, you keep the education discount.. which is fine… but that’s about it…
The gift card is only making you spend more later on… since you already paid the 120.

It can only be a gain for the consumer, if the gift card is free of charge, meaning NO 120 payment!! Which it is not!!!

Are you joking or just really, really bad at maths?

In other words, that's a free gift card.

Whether or not it will make you spend more later is up to you. There's plenty of stuff you can get for 120 pounds.
Score: 7 Votes (Like | Disagree)

boak
Back to School is a very apt name methinks
Score: 7 Votes (Like | Disagree)

Another one claiming fake education discount? ?

I can see why Apple used to give away Airpods in the past. Save them having to take on 100s of seasonal customer service reps dealing with this every summer.
Score: 5 Votes (Like | Disagree)

If I have to pay for the gift card, them it just makes no sense, the prices remained the same as yesterday.

There is no deal in this situation

You can buy a gift card anytime you like.

So the offer is working perfectly if the price is the same. They email out the code for the gift card at delivery or just before to use on a future purchase. That way you receive the gift card for no extra cost.
Score: 4 Votes (Like | Disagree)

ascender
Reading the first page of posts in this thread has made my head hurt.

A gift card is a much better idea IMO than AirPods for us and I guess Apple are also hoping you might then end up spending more than just the £120/$150.
Score: 4 Votes (Like | Disagree)
Read All Comments