Apple has agreed to settle a long-lasting six-year class-action lawsuit that accused it of knowingly slowing down iPhone 4S devices following the iOS 9 update in 2015, agreeing to pay some ‌iPhone‌ 4S owners who had experienced poor performance $15 each for their claims. 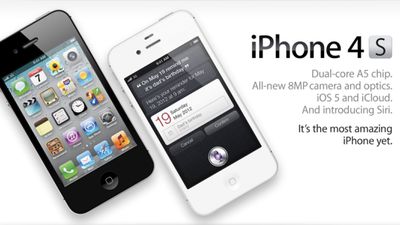 The class-action lawsuit was initially filed in December 2015 by plaintiffs representing a group of ‌iPhone‌ 4S customers from New York and New Jersey. The lawsuit accused Apple of falsely marketing the iOS 9 update as providing enhanced performance on devices it supports, including the ‌iPhone‌ 4S.

Plaintiffs collectively filed the operative Complaint in this action alleging that the Class was harmed when consumers downloaded iOS 9 onto their iPhone 4S devices after being exposed to Apple’s allegedly false description of the new operating system. Plaintiffs contend that Apple misrepresented that iOS 9 was compatible with the iPhone 4S and would improve or “enhance performance” for its customers that downloaded the software update. Instead, Plaintiffs contend, iOS 9 significantly slowed down the performance of their iPhone 4S devices.

Apple marketed iOS 9 with the tagline "The most advanced mobile experience. Now even more so." The update included proactive Siri Suggestions, Slide Over, Split View, Picture in Picture on iPad, etc. On the ‌iPhone‌, Apple promised "under-the-hood refinements [that] bring you more responsive performance." The class-action lawsuit argues that the claim was false marketing for the ‌iPhone‌ 4S, the oldest ‌iPhone‌ iOS 9 supported.

Apple claiming iOS 9 offers faster performance for supported devices, including the ‌iPhone‌ 4S
Under the settlement, Apple allocated $20 million to compensate ‌iPhone‌ 4S owners in New York and New Jersey who experienced poor performance after updating to iOS 9. Customers who believe they are entitled to the $15 must "submit a declaration under the penalty of perjury that, to the best of their knowledge, they downloaded iOS 9, or any version thereof, onto their ‌iPhone‌ 4S... their ‌iPhone‌ 4S experienced a significant decline in performance as a result, are entitled to a payment of $15 per applicable device."

A website will be created where customers who believe they are entitled to the settlement will be able to submit a form, providing their name, email, ‌iPhone‌ 4S serial number (if possible), and mailing address. See the full motion here.

Danfango
The only winner was the lawyers as always.
Score: 18 Votes (Like | Disagree)

Wow! This is better than nothing. Can’t believe it took this long. At least this settlement amount will cover up one time lunch or dinner for some.

Honestly, the hassle that customers will have to go through with filing a claim, proving it somehow, submitting a declaration, etc..., only for $15 seems pointless. If someone is losing sleep because their iPhone from 11 years ago was slow after an update on a random night, they need some serious help in my opinion.
Score: 11 Votes (Like | Disagree)

BootsWalking
iPhone 4? That was 12 years ago. I think I'll file a lawsuit for my Apple Lisa. I think one of the floppies was dirty.
Score: 10 Votes (Like | Disagree)

Villarrealadrian
Maaan do this for iPhone 3G on iOS 4 and iPhone 4 on iOS 7!! total garbage OSs!
Score: 7 Votes (Like | Disagree)
Read All Comments

Friday October 21, 2022 1:06 pm PDT by Joe Rossignol
Apple recently started sending payments to select App Store developers as part of a $100 million settlement it reached in the lawsuit Cameron et al v. Apple Inc., which alleged that Apple had a monopoly on the distribution of iOS apps and in-app purchases. Apple referred to the settlement as a "Small Developer Assistance Fund." Eligible developers were expected to receive a payment between...
Read Full Article • 120 comments

Monday September 26, 2022 7:34 am PDT by Sami Fathi
Today marks exactly two weeks since Apple released iOS 16 to the public. Besides the personalized Lock Screen, major changes in Messages, and new features in Maps, the update has also seen its fair share of bugs, performance problems, battery drain, and more. After major iOS updates, it's normal for some users to report having issues with the new update, but such reports usually subside in...
Read Full Article • 242 comments

Wednesday September 21, 2022 4:25 am PDT by Sami Fathi
It's been nine days since Apple released iOS 16 to the public, bringing major changes to the Lock Screen, Messages, Maps, and more. In the days following the release, some users have encountered several issues on their iPhones, ranging from slow system performance to battery drain. In the past few days, iPhone 14 Pro users have shared specific bugs related to Apple's latest high-end iPhones, ...
Read Full Article • 170 comments

Monday November 7, 2022 8:55 am PST by Sami Fathi
Apple is preparing an iOS 16.1.1 update for the iPhone to address bugs and issues experienced by users following the first major update to the iOS 16 operating system two weeks ago, including a persistent Wi-Fi bug that's been annoying iPhone customers. MacRumors in the past week has seen signs of devices running iOS 16.1.1 in our website analytics, indicating the update is under testing...
Read Full Article • 98 comments

Thursday November 17, 2022 6:41 am PST by Sami Fathi
The latest beta of iOS 16.2, released to developers and public beta testers earlier this week, has addressed long-standing issues faced by iPhone 13 Pro and iPhone 14 Pro customers that cause system animations to lag and stutter when closing and switching between apps, unlocking the phone, and across other instances on iOS 16. Seemingly originating from the initial release of iOS 16, some...
Read Full Article • 34 comments