A leaked version of the European Union's Digital Markets Act (DMA) indicates that Apple could be forced to make major changes to the App Store, Messages, FaceTime, third-party browsers, and Siri. 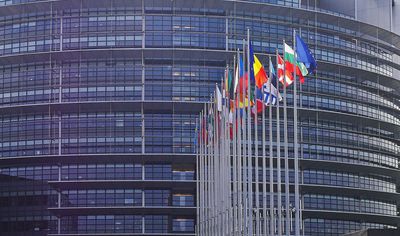 According to a leaked working document intended to reflect the "final" version of the DMA, seen by MacRumors, the EU is planning to enact changes that seek to have a significant impact on the way that companies like Apple will have to manage their products, apps, and services in Europe, particularly with regards to "gatekeeping."

Earlier versions of the Digital Markets Act set out demands for big tech companies to share metrics with competitors, ensure that all apps are uninstallable, and not preference their own apps and services. Companies that fail to do so may face large fines, as high as ten percent of the company's worldwide annual turnover, or even forced disinvestment.

One of the headline parts of the DMA attempts to prompt major changes to the ‌App Store‌, forcing Apple to allow users to download apps from the internet and third-party app stores and allow developers to use in-app payment systems of their choice and promote offers to users. Amendments to the DMA outlined in the leaked document seek to address browser engine gatekeeping and platform interoperability.

The document expands provisions to stop companies from requiring developers to use a particular browser engine. This change is likely intended to directly address Apple's requirement that all browsers running on iOS and iPadOS that use its own WebKit technology, and would allow third-party browsers like Chrome, Edge, Brave, and Opera to stop using WebKit and switch to Chromium like their desktop counterparts.

New wide-reaching interoperability obligations will require companies to ensure that, under certain circumstances, their messaging, voice-calling, and video calling apps and services will work with rival services and include end-to-end encryption. This could have implications for iMessage and ‌FaceTime‌, but it is not clear how far Apple will need to make changes to its services to meet the DMA's interoperability requirements.

The DMA has also been amended to add provisions for regulating virtual assistants like ‌Siri‌, stating that users should be given the option to change the default virtual assistant to a third-party option when using it for the first time. Other changes to the DMA relate to preventing companies from giving their own apps and services preferential treatment, such as when presenting rankings or search results.

EU lawmakers provisionally approved the DMA in March. Once the final document is officially published, the European Parliament and the Council will need to approve it before it can come into effect. Digital competition chief Margrethe Vestager said last month that she expects the DMA to come into force "sometime in October."

Earlier this week, members of the European Parliament voted overwhelmingly in support of legislation that will compel Apple to offer a USB-C port on all iPhones, iPads, and AirPods in Europe.

WiseAJ
Massive government overreach. Play hardball Apple and threaten to pull out of the EU. They need you more than you need them.
Score: 116 Votes (Like | Disagree)

djcerla
If I want Android, then I buy Android.

As time goes on my desire for sideloading and installing apps that Apple would never allow grows stronger so I have to say I support the EU lawmakers in this endeavour.

Or, you could... you know... buy an Android device.
I support you in this endeavor.
Score: 95 Votes (Like | Disagree)

rpmurray
Is it too late to have them include a provision that Apple is required to make a 27 inch (or bigger) iMac?
Score: 90 Votes (Like | Disagree)

DHagan4755
This sounds like buying a Chevy & being given the option to replace OnStar with Dodge's UConnect.
Score: 71 Votes (Like | Disagree)

If GDPR serves as an indication, this is going turn into a horrible mess. I have no doubt the EU is well-intentioned, but that doesn’t make what they’re planning a good idea. I can appreciate the change to browser engine requirements, but everything else seems totally half-baked. Are they of the position that no company should have a competitive advantage with the products and services they offer? This makes zero sense.

They're of the opinion that no American company should ever have a competitive advantage. If Apple were German or French, none of this would ever have come up.
Score: 68 Votes (Like | Disagree)
Read All Comments