Schlage today released its Encode Plus smart lock with support for Apple's home keys feature in the Wallet app on the iPhone and Apple Watch. The smart lock is available in a variety of finishes at The Home Depot, Lowe's, and Build.com for $300 in the United States. 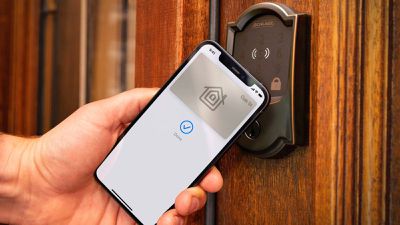 Apple's home keys feature lets you add a key card to the Wallet app, eliminating the need to use a physical key. Upon doing so, you can simply hold a compatible iPhone or Apple Watch near the Encode Plus to lock or unlock the door that it is installed on. The feature, powered by NFC technology, requires an iPhone XR or newer updated to iOS 15 or an Apple Watch Series 4 or newer updated to watchOS 8.

Express Mode allows you to unlock the door by simply holding your iPhone or Apple Watch near the lock, or there is an option to require Face ID or Touch ID as an additional layer of security. With Power Reserve, you may still be able to tap to unlock the door for up to five hours after your iPhone has run out of battery.

Encode Plus also supports HomeKit for controlling the lock with the Home app or Siri voice commands on an iPhone or Apple Watch, as well as Amazon Alexa and Google Assistant. The lock has a physical keypad and a keyhole to unlock the door without a device if necessary, providing peace of mind if you are without your iPhone or Apple Watch.

With built-in Wi-Fi connectivity, the Schlage Encode Plus does not require a smart home bridge or any other hardware. The lock is battery operated, with four AA batteries included and a low-battery indicator built into the keypad.

In the Home app on an iPhone, you can set up access codes for guests who need temporary access to your home.

Encode Plus is the first smart lock to support Apple's home keys feature, but additional options should enter the market over time.

Because keys were just such a poor choice...

Actually. Yes. And I have spent years trying to widdle down to no keys. Almost got there last summer. Now back to a few.

I guess that's your setup, but it's not everyone's. I have a door knob with no lock, and only the deadbolt as my only lock on my front door. This will work perfect for my home.
Score: 10 Votes (Like | Disagree)

MrRom92
Got the availability email this morning and ordered immediately (Camelot in Satin Nickel) along with a pack of Eneloop Pro AAs, which should hopefully provide a nice long battery life in this unit.
My grandmother now has severe mobility issues and can’t answer the door for anybody, so we were looking for a smart lock that we could open remotely. We held out as long as we possibly could so we could get this version which has HomeKey support, which is really a major plus. Looking forward to installing it.
Score: 8 Votes (Like | Disagree)

Also, it's Schlage we are talking about.
Score: 7 Votes (Like | Disagree)

Yes, but I have never used the knob lock in any house I have lived in. The deadbolt is far more secure so I never really saw the point of the added hassle. That said, I don't see myself ever going keyless. The off-chance of my phone quitting while I am out exists, and I am not a fan of leaving spare keys hidden about.

If you use a deadbolt, there isn't much to be gained by also locking a doorknob.
Score: 7 Votes (Like | Disagree)
Read All Comments

Friday October 21, 2022 11:33 am PDT by Juli Clover
Smart lock maker Level today announced the official launch of its Level Lock+, which is now available for purchase from Apple's online store. The Level Lock+ has been in Apple retail stores since last week as part of a soft launch, but those who do not live near a store location can now order it online. Level Lock+ is an Apple exclusive product, as it is designed to work with the Home Keys...
Read Full Article • 89 comments

Tuesday September 13, 2022 5:57 am PDT by Joe Rossignol
Apple this week updated the iOS 16 features page on its website with some additional information about the Wallet app on the iPhone. First, the page now indicates that iOS 16 allows users to securely add new keys to the Wallet app on the iPhone and Apple Watch directly from a website in Safari, without having to download the key issuer's app from the App Store. Second, Apple has revealed...
Read Full Article • 22 comments

Thursday June 2, 2022 10:04 am PDT by Joe Rossignol
BMW this week announced two new vehicles with support for its Digital Key Plus feature, including the 2023 X1 and an all-new electric SUV called the iX1. Digital Key Plus allows for compatible BMW vehicles to be locked, unlocked, or started with an iPhone or Apple Watch, eliminating the need for a physical key. The standard NFC version of the feature requires the iPhone or Apple Watch to be...
Read Full Article • 91 comments

These 9 U.S. States Will Let You Add Your Driver's License to Your iPhone

Friday October 7, 2022 9:02 am PDT by Joe Rossignol
Earlier this year, Apple launched a feature allowing residents of participating U.S. states to add their driver's license or state ID to the Wallet app on the iPhone and Apple Watch, providing a convenient and contactless way to display proof of identity or age. As we wait for IDs in the Wallet app to expand to additional U.S. states, here is everything you need to know about how the feature ...
Read Full Article • 204 comments

Tuesday October 18, 2022 10:22 am PDT by Juli Clover
Apple today seeded the release candidate version of watchOS 9.1 update to developers ahead of an expected public release on Monday, October 24 alongside iOS 16.1. The new beta comes one week after Apple released the fifth watchOS 9.1 beta. To install ‌watchOS 9.1, developers will need to download the configuration profile from the Apple Developer Center. Once installed, ‌watchOS 9.1‌...
Read Full Article • 22 comments