The seventh-generation iPod touch is 1,000 days old as of today, with no apparent sign of a new model on the way. 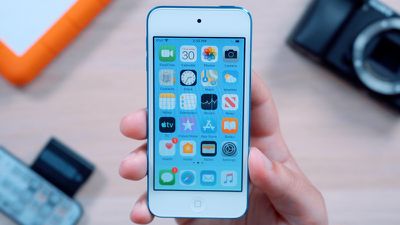 The iPod touch is Apple's least expensive iOS device, starting at $199. With a 4-inch Retina display, it is also the smallest iOS device and the only remaining iOS device with a 3.5mm headphone jack. The iPod touch is most popular as an entry-level device in the Apple ecosystem, particularly for children, and is also a common choice in retail settings due to its pricing and form factor.

It is notable that the seventh-generation iPod touch was a very minor update, featuring the A10 Fusion chip from the iPhone 7 and a 256GB storage option for the first time. Every other aspect of the device, including the camera specifications and color options, were the same as the previous, sixth-generation iPod touch. In terms of major updates, the iPod touch was last redesigned almost 10 years ago in 2012 at the same time as the ‌iPhone‌ 5. Since then, it has had two minor refreshes in 2015 and 2019.

Looking at the Apple devices that the company sold for the longest time, the seventh-generation iPod touch is still some way off the 2013 "trashcan" Mac Pro, which went 2,182 days without an update before the launch of the modular 2019 ‌Mac Pro‌.

The iPod touch is the only iPod product that Apple still sells following the discontinuation of the iPod nano and iPod shuffle in July 2017. Despite the hopes of some iPod enthusiasts and excitement around the potential nostalgia of reviving the classic iPod design with the click wheel, there have been no rumors of an eighth-generation iPod touch, or of any new iPod models at all, meaning that the future of the entire iPod brand and product line stands in question.

Phil77354
And in other news, Apple adds the iPod touch to its 'Vintage Product' list but forgets to stop selling them first.
Score: 38 Votes (Like | Disagree)

rocketpig
I have young kids who love to play music on their already-old iPods. I’d snatch up new models if Apple ever released them but I’m not going to spend $200 on three year old hardware.
Score: 29 Votes (Like | Disagree)

dantracht
Time for it to go. Still miss my old classics but these are ready for that big apple store in the sky.
Score: 19 Votes (Like | Disagree)

Apple tends to refresh it only when the old one can no longer run the current iOS. Basically whenever A10 is no longer supported by iOS.
Score: 16 Votes (Like | Disagree)

Macropanda
I'd love a refresh on these. Would be perfect for kids that aren't really old enough for a phone but want something with a camera, games for car journeys and their banking app etc.
Score: 16 Votes (Like | Disagree)

NoSoup4U
The iPhone SE picks off a lot of the iPod demand. Or a hand-me-down iPhone.

Insert an unactivated SIM card, and many kids can get by with wifi calls via FaceTime audio. Plus free-texting phone plans have gotten a lot cheaper, cancel the landline...
Score: 14 Votes (Like | Disagree)
Read All Comments

Tuesday March 8, 2022 12:35 pm PST by Juli Clover
Following the launch of the new Mac Studio with M1 Ultra chip, AMD today announced that it has introduced the AMD Radeon PRO W6600X GPU for the existing Intel-based Mac Pro lineup. The AMD Radeon PRO W6600X GPU is built on AMD's RDNA 2 architecture, which AMD says offers "stunning visuals and exceptional performance" for the Mac Pro. The GPU supports up to 8GB of GDDR6 memory with up to...
Read Full Article • 27 comments

Native Union Brings Back iPod Socks, But for AirPods

Tuesday October 26, 2021 10:12 am PDT by Juli Clover
Native Union this week announced the launch of AirPods Beanies, a new carrying case for the AirPods that's modeled after the iconic iPod Sock. AirPods Beanies come just after the 20th anniversary of the iPod, and will be appealing to iPod fans. Apple began selling iPod Socks in 2004, offering a set of six for $29. When they were introduced, Steve Jobs jokingly referred to them as a...
Read Full Article • 47 comments