Apple Launches New iPod Touch With A10 Fusion Chip and Up to 256GB Storage, Priced From $199

Apple today announced a new iPod touch with headline features being a faster A10 Fusion chip and a new 256GB storage option. 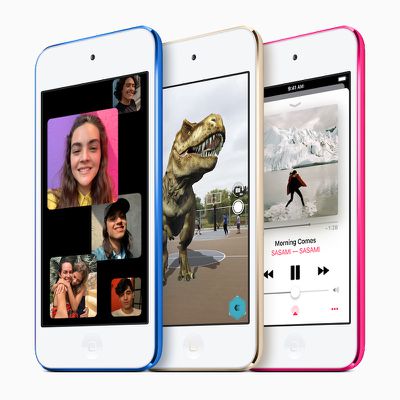 The seventh-generation iPod touch has the same design as the sixth-generation model, including a 4-inch Retina display, a home button without Touch ID, a 3.5mm headphone jack, a Lightning connector, and a single speaker and microphone. The device remains 6.1mm thick and continues to weigh 3.1 ounces.

The new iPod touch also has the same battery life of up to 40 hours for music playback and up to eight hours for video playback, and the same 8-megapixel rear camera and 1.2-megapixel front camera, as the previous iPod touch.

The A10 Fusion chip is also found in the iPhone 7 and ‌iPhone‌ 7 Plus and the sixth-generation iPad.

We're making the most affordable iOS device even better with performance that is twice as fast as before, Group FaceTime and augmented reality starting at just $199. The ultra-thin and lightweight design of iPod touch has always made it ideal for enjoying games, music and so much more wherever you go.

The new iPod touch is available to order on Apple.com and in the Apple Store app starting today with in-store availability at Apple Stores and authorized resellers starting later this week. U.S. pricing is set at $199 for 32GB of storage, $299 for 128GB, and $399 for the new 256GB option. The previous iPod touch also started at $199.

The same six colors are available, including space gray, silver, gold, blue, pink, and (PRODUCT)RED in support of the Global Fund.

The previous iPod touch was released in July 2015 with an A8 chip and up to 128GB of storage. With the new iPod touch with an A10 Fusion chip now available, it is possible that the sixth-generation model might not support iOS 13, which Apple is expected to introduce at WWDC 2019 on Monday.

Despite the update, the iPod touch remains a niche product, with Apple positioning it primarily as a device for Apple Music and the upcoming Apple Arcade.

shadowmatt
Ah Apple at its best.

Reusing an old design, so out of date it hurts, and pretending its new.
Score: 50 Votes (Like | Disagree)

TriBruin
For those asking who is the customer or why no redesign, probably don't realize Apple sells a large number of these devices in to the retail and customer service industry. Several companies make sleds that can act as bar code readers and/or POS credit card terminals. By not changing the form factor, companies don't have to wait for the sled manufacturers to update their product.
Score: 46 Votes (Like | Disagree)

Ah Apple at its best.

Reusing an old design, so out of date it hurts, and pretending its new.

It's a silent refresh. I don't think they are pretending it's new at all.
Score: 33 Votes (Like | Disagree)