A federal judge in the U.S. has dismissed a proposed class-action lawsuit that accused Apple of misleading customers about the iPhone's water resistance (via Reuters). 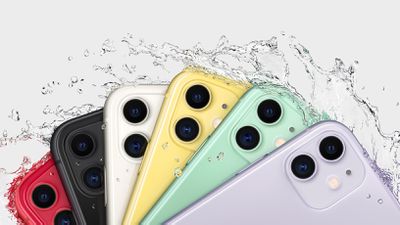 Apple has extensively advertised the water resistance of the ‌iPhone‌ in its marketing campaigns since the launch of the ‌iPhone‌ 7, including the claim that some models can survive depths of up to four meters for 30 minutes.

Two plaintiffs from New York and one from South Carolina brought a lawsuit against Apple in the Southern District of New York for "false and misleading" misrepresentations that purportedly allowed the company to charge "twice as much" for iPhones than the cost of "average smartphones."

Now, U.S. District Judge Denise Cote has ruled that while the plaintiffs plausibly alleged that Apple's advertising could mislead some customers, they did not demonstrate that their iPhones were damaged by "liquid contact" Apple promised they could withstand. The judge also found no evidence of fraud, citing a lack of proof that Apple consciously intended to overstate its water-resistance claims for commercial gain.

It was also ruled that there was insufficient evidence that the plaintiffs relied on fraudulent marketing statements when choosing to buy their iPhones. A lawyer representing the plaintiffs said that his clients were disappointed with the verdict, and there has not yet been a decision about whether to appeal.

Although this case has been dismissed, an Italian judge in late 2020 fined Apple $12 million for misleading customers about the iPhone's water resistance. The ruling explained that Apple did not suitably clarify that its water-resistance claims are only true under specific conditions, such as during controlled laboratory tests with the use of static and pure water, and not in the normal conditions of use by consumers. The regulator also ruled that it was inappropriate for Apple to highlight water resistance as a feature, while at the same time refusing to provide post-sales warranty assistance if the ‌‌iPhone‌‌ models in question suffer water damage.

Apple's iPhone 12 and iPhone 13 lineups feature the best water resistance rating on an ‌iPhone‌ to date with an IP68 rating. This means that the devices can withstand water up to a depth of six meters (19.7 feet) for up to 30 minutes. The IP68 water resistance rating means that the ‌iPhone 12‌ and ‌iPhone 13‌ can hold up against splashes, rain, and accidental water exposure, but intentional water exposure should still be avoided if possible.

According to Apple, water and dust resistance are not permanent conditions and can deteriorate over time as a result of normal wear. Apple's warranty does not cover liquid damage, so it is best to exercise caution when it comes to liquid exposure.

leman
My opinion on the matter is simple: if you market your product as being water-resistant, warranty has to cover moisture-related damage, unless it can be demonstrated (by the manufacturer) that the exposure to the water was really excessive.
Score: 29 Votes (Like | Disagree)

Judge is splitting hairs using semantics. There’s absolutely zero guarantee that new iPhones will be waterproof- thus nobody can assume they are because some do leak.
Yet Apple advertises that they indeed are waterproof to IP 68 standards - which clearly some of them are not.

Where did Apple say waterproof? Don’t they advertise their iPhones as water resistant? That’s not the same thing.
Score: 21 Votes (Like | Disagree)

nortonandreev
“The regulator also ruled that it was inappropriate for Apple to highlight water resistance as a feature, while at the same time refusing to provide post-sales warranty assistance if the ‌‌iPhone‌‌ models in question suffer water damage.”

69Mustang
Two different judges in two different courts in two different countries render two different verdicts. Both were correct, imo. The US case should have been lost based on what the plaintiffs alleged. Conversely, the Italian case highlighted the problem I have with all phone makers and their advertising of water resistance. Ads show resistance to sea water, beer/liquor, and other liquids. None are covered under warranty and the IP rated resistance is only truly valid under controlled conditions.
Score: 9 Votes (Like | Disagree)

Apple’s stance regarding water resistance is the same as almost every other manufacturer. Water resistance does not mean waterproof. Seals and gaskets degrade over time and may degrade rapidly due to environmental factors.

As the judge ruled in this case: It’s impossible to objectively prove that water damage wasn’t caused by a situation exceeding the specifications that Apple has set.

Basically: water resistance might save your phone if you’re lucky, but don’t get your expensive device wet on purpose.

Do they degrade so fast that the phone loses water resistance over the warranty period?

Don't advertise your product as water resistant if you're not going to warranty it to what it is designed to withstand. Sure over time it may lose it, but it should be able to keep its rated abilities through the typical warranty period. Warranties are for product defects, not wear and tear. It's like automakers that make sports cars that advertise how the car is made for the track, it has a racing suspension, extra cooling, etc etc but then goes, " Oh you actually took it to the track? Warranty is void!". Biggest form of BS in the world.
Score: 7 Votes (Like | Disagree)
Read All Comments

Monday October 25, 2021 6:34 am PDT by Hartley Charlton
The MagSafe Charging Case for the third-generation AirPods features sweat and water resistance, making the standard AirPods the first to feature an IPX4-rated charging case. Apple promoted the sweat and water-resistance of the third-generation AirPods with the device's announcement last week, but the IPX4 rating applies to both the earbuds and the charging case. The AirPods Pro were the...
Read Full Article • 31 comments

Thursday February 24, 2022 3:31 am PST by Tim Hardwick
Apple has previewed Apple Al Maryah Island, a new retail store from the company in Abu Dhabi's financial district that is set to open this Friday. Elevated above steps of cascading water, Apple Al Maryah Island introduces several new store design elements that are reflective of its surroundings. "Absolute Black" granite stone has been used to pave two ramps that cut through the water and...
Read Full Article • 27 comments