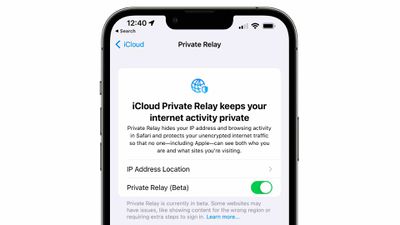 iCloud Private Relay is an innovative internet privacy service that allows users with an iCloud+ subscription to connect to the internet and browse with Safari in a more secure and private way. We have rolled Private Relay out in beta and it's available in most countries around the world. No carrier partners have blocked their users from taking advantage of Private Relay.

No changes were made to iCloud Private Relay in iOS 15.2 that would have toggled the feature off. Users are encouraged to check their Settings to see if Private Relay is enabled on their device or for a specific network.

Apple also said that no carriers, including T-Mobile, have blocked their users from taking advantage of the ‌iCloud‌ Private Relay feature.

T-Mobile earlier this week was accused of disabling ‌iCloud‌ Private Relay for its users after some T-Mobile subscribers found that they were unable to turn on the feature. T-Mobile then released a statement that said it had discovered that the iOS 15.2 update was causing some device settings to default to the feature being toggled off, which Apple says did not happen.

T-Mobile also said that customers who have plans and features that use T-Mobile content filtering, such as parental controls, do not have access to ‌iCloud‌ Private Relay in order to allow these services to work as designed. It is not entirely clear why some T-Mobile subscribers were having issues, but customers who are not using content filtering should be able to use ‌iCloud‌ Private Relay as expected.

In light of the new information from Apple, T-Mobile has issued a revised statement clarifying that there were no changes made in iOS 15.2.

We wanted to update what we shared earlier. Apple doesn't change customers' settings when they update to iOS 15.2. Customers may see an error message if they previously toggled iCloud Private Relay or Limit IP Address Tracking off in their Cellular Data Options Settings. Apple has more details on their support page for this feature here.

Apple today also made changes in the iOS 15.3 beta to make it clearer what's going on when ‌iCloud‌ Private Relay is not working for a cellular network. The messaging now advises customers to check their cellular settings if the feature is disabled, rather than simply suggesting a carrier partner does not support it.

All three U.S. carriers yesterday confirmed that they support ‌iCloud‌ Private Relay, and now Apple has also made it clear that no carriers are blocking the feature.

Apple does say that there are network setups that could cause ‌iCloud‌ Private Relay not to work. Networks that audit traffic or perform network-based filtering will block access to Private Relay. This includes enterprise and school networks, which often have traffic monitoring policies, as well as cellular providers that are offering network-based services like Parental Controls, as is the case in T-Mobile's situation.

BWhaler
It must be exhausting for Apple to fight on every front for our privacy. It would be so easy to just fold up their tents and make a ton more money.

Apple is not perfect. Far from it. But thank heavens it is run by principled leaders who fight for us. They don’t need to—yet they do anyway. And I, for one, am thankful.
Score: 20 Votes (Like | Disagree)

Check under Settings -> Cellular -> Cellular Data Options. If that's off, iCloud Private Relay will not work over cellular
Score: 9 Votes (Like | Disagree)

LoveTo
Reading between the lines, I think Apple is saying that the bug wasn’t introduced in 15.2 but it was in-fact introduced in 15.1. T-Mobile just didn’t figure it out until 15.2 ?
Score: 7 Votes (Like | Disagree)

It must be exhausting for Apple to fight on every front for our privacy. It would be so easy to just fold up their tents and make a ton more money.

Apple is not perfect. Far from it. But thank heavens it is run by principled leaders who fight for us. They don’t need to—yet they do anyway. And I, for one, am thankful.

I am happy that my interests and Apple's profit interest align in this case to give me a product I'm interested in. Apple doesn't pursue privacy instead of profit... They pursue it in favor of profit. It is the strongest area Google can't compete with them on since a core portion of their business model (including for Android) is profiting from personalized ads which require user data collection...

Don't prescribe morals and principals to corporations. They lack capacity for anything more than profit seeking.
Score: 6 Votes (Like | Disagree)

Apple also said that no carriers, including T-Mobile, have blocked their users from taking advantage of the iCloud Private Relay feature.

At least some of the confusion over T-Mobile and iCloud Private Relay may be related to the wording of the setting in the current version of iOS 15.2, which says that iCloud Private Relay is not carrier supported even if the feature is actually toggled off by the user in the cellular settings.

I have an intense dislike for programs where the developers casually lie to the users, usually along the lines of "oh, an error happened in this section, and the developer was only thinking of error X, so if any error happens, explain to the user that they did X wrong".

It's like when Windows would blue-screen, and then the following startup screen said, basically, "we're having to check the filesystem integrity because you didn't shut the system down properly, next time please shut the system down properly" - for the 200th time, your OS ****ing blue screened you idiots! Not that I'm still bitter about that or anything. I've also seen systems that say, "you haven't purchased any music / apps / whatever", showing a blank list, rather than saying, "we are currently unable to contact the server to verify what music/apps you have purchased". Developers that just assume the user is at fault infuriate me. It's a very unprofessional assumption to make unless you've really checked everything else, and it always seems to be happening when lazy developers have not, in fact, checked everything else. It makes your program look bad, and to a lesser extent, it makes all software seem less trustworthy.

Apologies for the rant (or thanks for coming to my TED Talk?). There are better ways to write software.
Score: 5 Votes (Like | Disagree)
Read All Comments