One of the Wallet features introduced in iOS 15 was support for home keys, which will let users add digital keys for compatible HomeKit door locks to the Wallet app on their iPhone and Apple Watch. With the system, users can take advantage of NFC connectivity to quickly unlock their home by simply bringing their device close to the lock. 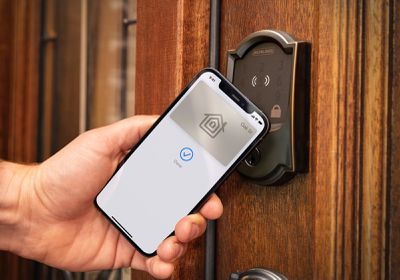 Schlage today is introducing the Schlage Encode Plus Smart WiFi Deadbolt, which is the first smart lock in North America to support Apple's home key system.

The Encode Plus operates as a traditional ‌HomeKit‌ deadbolt, working over Wi-Fi without the need for a separate hub to integrate with the Home app across Apple's platforms. As part of the ‌HomeKit‌ setup process, however, you're also offered the option of adding a home key for the lock in the Wallet app.

It is also a traditional keypad deadbolt with physical key backup, so there are multiple options for unlocking your door. Up to 100 access codes can be created to distribute to users who may need access to your home, and the codes can be scheduled to be valid only at certain times or revoked if no longer needed.

In addition to ‌HomeKit‌ and Apple home key support, the Encode Plus also features Google Assistant and Alexa support.

The Encode Plus will be priced at $299.99 and will launch this spring. It will be available in two versions, a more traditional Camelot style and a more modern Century style, with both styles available in several color options.

Pezimak
Someone will just break a window if they want in anyway.
Still best to have a key handy in case your battery goes flat, or you break or lose your phone.
Score: 4 Votes (Like | Disagree)

JustSomebody12
I am waiting for UWB compatibility.

I am waiting for UWB compatibility.

That'd be much better.

Does anyone know if UWB is part of the initial HomeKey spec options Apple supports?
Score: 3 Votes (Like | Disagree)
Read All Comments