Apple will debut its rumored custom-designed 5G modem in 2023's iPhone models and the component will not be integrated into the device's A-series chip, DigiTimes reports. 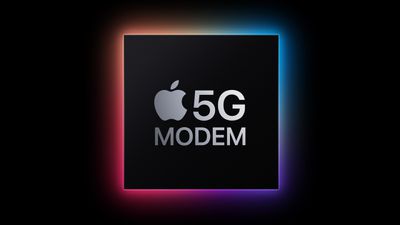 In paywalled report published earlier today, sources speaking to DigiTimes said that 2022 will be the last year when Qualcomm supplies all of the modems in ‌iPhone‌ models. Thereafter, iPhones are expected to begin featuring 5G baseband modem chips designed by Apple itself.

The 5G modem that Apple has developed for its 2023 ‌iPhone‌ models is said to be separate from its A-series chip, tentatively called the "A17." This stands in contrast to the initial Android devices that are looking to feature custom modems, which reportedly intend to integrate both the cellular processor (CP) and application processor (AP) directly into the device's System on Chip (SoC).

TSMC, the Taiwanese company that currently supplies all of Apple's custom silicon SoCs, is believed to be preparing to supply Apple with its custom-designed 5G baseband modem.

At its investor day earlier this week, Qualcomm said that it expects to supply just 20 percent of Apple's modem chips in 2023, suggesting that Apple will self-supply up to 80 percent of the 5G modem chips required for iPhones starting in 2023.

Apple is believed to have kickstarted the work on its own in-house modem chips, with the aim of moving away from Qualcomm, by acquiring Intel's modem chip business in 2019.

The report lines up with previous rumors that said that Apple's modem chip will be ready to launch in 2023.

DigiTimes, really? At least their "fingers in the air" statement sort of makes sense, the first generation won't be integrated in the SOC because Apple has already planned m2 launching in 2022 and m3 CPUs launching in 2023, but the second generation modems will integrate into m4 around 2024. That's how CPU design works and how far ahead they plan.

Unless they’re also planning to include it in their MacBook lineup… then it would make sense to keep it separate so it’s easily addable to different systems and chips.
Score: 16 Votes (Like | Disagree)

Because 5G cellular modems are very hard to get right. They are incredibly complex and have a lot of analog components. Apple has been building their own SoCs since 2012 and they weren't comfortable to replace notebook CPUs until 2020. They can't do the same gradual learning process with the 5G modem. It has to work the first time with all the features meeting international specifications. Can you imagine the disaster if Apple's 5G modem doesn't work well on Apple's flagship iPhones?
Score: 13 Votes (Like | Disagree)

cal6n
Any part of the stack you do not control controls you.
Score: 11 Votes (Like | Disagree)

5G modems are a licensing minefield with Qualcomm punishing everyone for even the smallest misstep. Bear in mind that for the CPUs, Apple partially founded ARM and they are licensed to do whatever they desire.
Score: 9 Votes (Like | Disagree)

The challenge is likely working around Qualcomm patents.

I find this move timely. On one hand, it should improve Apple’s margins significantly by either reducing the IP fees Apple pays out (down from $90 to $20), though I would impressed if Apple is able to circumvent the fees to Qualcomm altogether.

The second is that the less Qualcomm earns from Apple, the less money it has for R&D, and the slower it will be able to innovate relative to Apple. Which again is typically how most downward spirals begin.

The prospects of an Apple-owned satellite beaming data to Apple-designed modems is also a very appealing one.

Bring it on, Apple!
Score: 9 Votes (Like | Disagree)
Read All Comments

Tuesday November 23, 2021 7:37 pm PST by Eric Slivka
Apple's main chip manufacturing partner TSMC will beginning producing Apple's first in-house 5G modem chips for the iPhone in 2023, according to a report from Nikkei Asia. The move, which has been under development for several years and enhanced by Apple's 2019 acquisition of the majority of Intel's modem business, will allow Apple to shift away from Qualcomm as a supplier for the important chips ...
Read Full Article • 82 comments

Friday December 18, 2020 9:35 am PST by Joe Rossignol
The popularity of iPhone 12 models has led to soaring demand for Qualcomm's 5G modems and RF chips, helping to propel the chipmaker's revenues past that of rival Broadcom in the third quarter of 2020, according to Taiwanese research firm TrendForce. Qualcomm reported $4.9 billion revenue in the third quarter, a 37.6% increase over the year-ago quarter, compared to $4.6 billion for Broadcom....
Read Full Article • 34 comments

Wednesday February 24, 2021 8:10 am PST by Joe Rossignol
Apple's next-generation iPhone 13 lineup will use Qualcomm's Snapdragon X60 5G modem, with Samsung to handle manufacturing of the chip, according to DigiTimes. Built on a 5nm process, the X60 packs higher power efficiency into a smaller footprint compared to the 7nm-based Snapdragon X55 modem used in iPhone 12 models, which could contribute to longer battery life. With the X60 modem, iPhone...
Read Full Article • 81 comments

Friday December 3, 2021 7:10 am PST by Hartley Charlton
Apple's AirTags are being used in an increasing number of targeted car thefts in Canada, according to local police. Outlined in a news release from York Regional Police, investigators have identified a new method being used by thieves to track down and steal high-end vehicles that takes advantage of the AirTag's location tracking capabilities. While the method of stealing the cars is largely ...
Read Full Article • 197 comments

Tuesday November 30, 2021 8:08 am PST by Joe Rossignol
Apple plans to release a third-generation iPhone SE in the first quarter of 2022, according to Taiwanese research firm TrendForce. If this timeframe proves to be accurate, we can expect the device to be released by the end of March. As previously rumored, TrendForce said the new iPhone SE will remain a mid-range smartphone with added support for 5G:In terms of product development, Apple is...
Read Full Article • 119 comments

Thursday December 2, 2021 7:36 am PST by Joe Rossignol
Apple's chipmaking partner TSMC has kicked off pilot production of chips built on its 3nm process, known as N3, according to Taiwanese supply chain publication DigiTimes. The report, citing unnamed industry sources, claims that TSMC will move the process to volume production by the fourth quarter of 2022 and start shipping 3nm chips to customers like Apple and Intel in the first quarter of...
Read Full Article • 182 comments