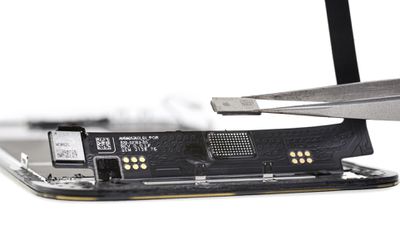 Image via iFixit
Given the blowback from repair providers unhappy with the restriction, Apple has decided to change its policy. Apple told The Verge that it plans to introduce a software update that will allow for standard display repairs that do not disable ‌Face ID‌.

Repair shops without access to Apple's pairing tools could take the microcontroller from the original display and add it to a new display, but it's a finicky process that requires soldering and a microscope to perform.

The software update that Apple plans to implement will remove the restriction that requires the microcontroller to be transferred to a new display when a repair is made, so independent shops will once again be able to repair screens without impacting the functionality of ‌Face ID‌.

There is no word yet on when Apple will add the software update to simplify ‌iPhone‌ display repairs for independent repair providers, but iOS 15.2 is in beta testing at the current time and the feature could be introduced in that update.

fwmireault
Great. They should not have even put this software limitation in the first place.
Score: 34 Votes (Like | Disagree)

SpaceN64
we shouldn't be praising them. They started this mess and now they have to clean it up
Score: 27 Votes (Like | Disagree)

Seems like Apple are backtracking on a lot of things lately, good news though that common sense has prevailed in this case ?

Common sense had nothing to do with it

Public backlash is the only tool that works against Apple anymore
Score: 23 Votes (Like | Disagree)

Havalo
Shouldn’t have been implemented in the first place, pure greed!
Score: 22 Votes (Like | Disagree)
Read All Comments

Wednesday November 24, 2021 8:38 am PST by Joe Rossignol
Apple recently announced a new self-service repair program that will provide customers with access to Apple genuine parts, tools, and manuals for completing their own repairs of select devices, starting with iPhone 12 and iPhone 13 models. Apple said the program will launch early next year in the U.S. and expand to additional countries throughout 2022. Apple CEO Tim Cook briefly shared his...
Read Full Article • 77 comments

Tuesday December 7, 2021 9:12 pm PST by Juli Clover
With the launch of iOS 15.2, Apple is adding a new "Parts and Service History" section to the Settings app that will let users see the service history of their iPhones and confirm that components used for repairs are genuine. As outlined in a new support document, iPhone users who have iOS 15.2 or later installed can go to Settings > General > About to access Parts and Service History. The...
Read Full Article • 25 comments