If you're the proud owner of a new MacBook Pro, all things considered, gaming probably wasn't at the top of your priority list when you made the expensive purchase. Even so, when you're not doing resource-hungry work on your new high-end Mac, you can still have some fun with all that power under the hood. Granted, Macs aren't revered for their triple-A games catalog, but there are some popular titles worth firing up on your new machine, and you might just be surprised at how well they play. 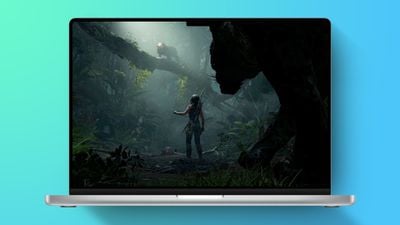 The following titles offer a taster of the gaming performance that Apple's latest M1 Pro and M1 Max chips can achieve, in some cases running code that isn't even optimized for Apple silicon. And with a little bit of luck, these impressive results might excite games developers and publishers enough for them to see the potential power of Apple's processors, and for us to see more triple-A titles ported to the Mac platform in future.

1. Shadow of the Tomb Raider

Shadow of the Tomb Raider is one of the most high-performing games on Apple's custom chip architecture, despite not being an optimized Mac port that takes advantage of the macOS Metal graphics API. To play the game on Apple silicon, you need to run it through Apple's Rosetta translation layer.

Even so, the ‌M1 Pro‌ and ‌M1 Max‌ chips make light work of processing the complex outdoor environments and large draw distances of Shadow of the Tomb Raider, even when using the "High" graphics preset at 1080p, with the game averaging 50-60 frames per second on a 14-inch MacBook Pro with an ‌M1 Pro‌ chip.

As demonstrated by YouTuber MrMacRight, on a 16-inch MacBook Pro with an ‌M1 Max‌ chip, frame rates almost double at the same settings, while at 1140p resolution it's possible to achieve a sustained 50-60fps on the more powerful MacBook Pro chip if you switch the graphics to medium.

One of the more recent triple-A game ports to macOS, Metro Exodus is one of the most impressive looking first-person shooters currently available on the Mac, and also one of the best performing on Apple silicon.

Even though the game requires Apple's Rosetta translation layer to run, the integrated graphics cores in the ‌M1 Pro‌ and ‌M1 Max‌ chips are well-equipped to deal with the effects-laden game engine, which makes extensive use of light and dark environments to deliver its blend of deadly combat, stealthy exploration, and survival horror. Frame rates average 40-50fps in native 1440p resolution on both chips, and run just shy of 100fps at 1080p.

Another macOS port that is still x86-only and therefore requires Arm translation via Rosetta, Deus Ex: Mankind Divided is one of the more demanding games to come over to macOS, and Macs powered by Apple's first-generation M1 chip still struggle to run it at decent graphical settings.

However, with an ‌M1 Max‌ chip, the game can achieve an average of 70-80fps at 1080p resolution on High graphical settings, with an ‌M1 Pro‌ machine hitting around 50-60fps at the same settings. Switch to 1440p resolution and Deus Ex still manages a respectable (and highly playable) 45-55fps on ‌M1 Max‌.

Another Feral-developed title, A Total War Saga: Troy is the latest in the Total War RTS series and these games are traditionally considered CPU-intensive because of the sprawling land battles that need to be computed in real time.

Fortunately, Troy runs natively on Apple silicon, and the ‌M1 Max‌ clearly leverages the optimized code and achieves some blistering frame rates. At 1080p on high settings, the game consistently exceeds 100fps, while the ‌M1 Pro‌ manages 60-70fps at the same resolution.

Role-playing game Baldur's Gate 3 may not be officially released, but an early access version is available, which makes its performance on the latest MacBook Pro models all the more impressive given that the game isn't even finished yet.

At 1440p resolution, the action still regularly exceeds 100fps on an ‌M1 Max‌ machine where the ‌M1 Pro‌ sometimes flounders, fluctuating between 20-45fps. Even at 4K resolution on the "Ultra" graphics preset, the game stays in the buttery smooth 50-60fps zone on an ‌M1 Max‌ 16-inch MacBook Pro.

Other Titles Worth Considering

These are just some of the Mac games that enjoy increased performance on the new MacBook Pros. Other titles worth checking out include CounterStrike: GO, Hitman, Borderlands 3, and Fortnite.

Have you found a game, new or old, that plays exceptionally well on the new MacBook Pros? Let us know in the comments.

heystu
Solitaire. It's a bit laggy on the M1 Pro but almost perfect on the Max...
Score: 54 Votes (Like | Disagree)

Coreymac84
The title of this article could also be… “The only 5 games you can play on your new MacBook Pro without boot camp” lol
Score: 51 Votes (Like | Disagree)

I admit it. M1 Max is as powerful as mobile RTX 3080 even with Rosetta 2. At this point, it's up to game developers to support Apple Silicon for native performance just like Baldur's Gate 3.
Score: 22 Votes (Like | Disagree)

toobravetosave
the best era for gaming on a mac was when you could just run windows bootcamp lmao
Score: 17 Votes (Like | Disagree)

These aren’t games to show off anything hardware related… but they are fine to play.

Sounds like macOS still has nothing to offer, game wise, and this won’t change anytime soon.

What I see is that some AAA games released as recently as 1-2 years ago run well on the mac, a platform that has been lambasted as incapable of running AAA games.

Let's see what happens in the next 2-3 years, when all macs have capable hardware.
Score: 16 Votes (Like | Disagree)

Wednesday November 3, 2021 12:38 pm PDT by Juli Clover
Now that the new MacBook Pro models have been available for a week, we've been able to do more in-depth testing. In our latest YouTube video, we pit the entry-level 14-inch MacBook Pro with an M1 Pro chip against the high-end 16-inch MacBook Pro with an M1 Max chip to see just what you're getting with the upgrade to the M1 Max. Subscribe to the MacRumors YouTube channel for more videos. ...
Read Full Article • 203 comments

Sunday October 17, 2021 6:23 am PDT by Sami Fathi
A little more than 24 hours until Apple's much-awaited launch of redesigned 14-inch and 16-inch MacBook Pros, new evidence has emerged suggesting that Apple may be calling the chips that power the upcoming Macs "M1 Pro" and "M1 Max." The new MacBook Pros will be powered by the next generation of Apple silicon, featuring up to 10 CPU cores, with eight high-performance and two energy-efficient ...
Read Full Article • 325 comments

Monday October 18, 2021 11:11 am PDT by Sami Fathi
Apple's newly announced high-end chip for the new MacBook Pro, the M1 Max, can support up to three Pro Display XDRs and a fourth 4K TV display all at the same time, a significant jump in support compared to the single display support that the M1 chip provided. The M1 Pro chip supports up to two Pro Display XDRs alone, while the higher-end M1 Max chip extends support to an additional Pro...
Read Full Article • 81 comments