Some users who recently upgraded to macOS Monterey are experiencing a bug known as a "memory leak," a scenario in which a specific macOS process or application is bugged out and stays running for prolonged periods in the background, consuming abnormally high amounts of memory or RAM. 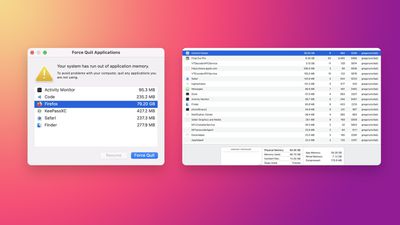 It's difficult to pinpoint precisely what models of Mac computers are affected; however, the range is relatively wide, including the newly released 14-inch and 16-inch MacBook Pros. Reports on Twitter, Reddit, the MacRumors Forums, and the Apple Support Communities consist of users reporting their Mac warning that the system has "run out of application memory" or that specific applications are consuming ridiculously high amounts of RAM in Activity Monitor.

Some reports call out the macOS Control Center as the main culprit, with YouTuber Gregory McFadden sharing a screenshot of Control Center using up to 20GB of RAM on their 64GB M1 Max 16-inch MacBook Pro. Other users are also sharing similar experiences on the MacRumors Forums and Reddit.

Another cluster of related reports includes Mozilla Firefox. As shown in the tweets below, Firefox for some users is taking up incredibly high amounts of memory, as high as 80GB for one user.

@AppleSupport got any idea what this is about ? m1 Mac mini 8gb safari does it too. I've restarted I've ran CleanMyMac x I've tried everything I know to do pic.twitter.com/TXNuEn3ayl — BayekAuditore (@Bayek_Auditore) October 29, 2021

Excluding Firefox and Control Center related reports, more widespread reporting from users across different platforms suggest the more common bug is the pop-up "Your system has run out of application memory."

The pop-up is seemingly being shown to users despite minimal use of their Macs with considerable amounts of memory to spare. In some instances, some users have suggested that restarting the Mac helps, while others say the pop-up reappears shortly after. A user on the Apple Support Communities noted their experience:

Mac users on the MacRumors Forums (1, 2, 3, 4), the Apple Support Communities (1, 2), and Reddit, are noting similar experiences. Just earlier today, we reported on user reports that the macOS Monterey update is bricking some older Mac computers. Given that and issues surrounding memory usage for some users, it may be best for users still on macOS Big Sur to wait until the second version of macOS Monterey before upgrading.

Mac Hammer Fan
I don't need ever year a new system that is buggy the first months and that gets security updates for only three years.
It would be better if Apple releases a new MacOS only once in three years but that is stable and supported for ten years.
I don't need all these bells and whistles.
Score: 76 Votes (Like | Disagree)

You must be a very busy person

saudor
The devs laid their eyes on the 1.5 tb ram in the Mac Pro and smiled. “We can finally be lazy with our code.“ /s
Score: 22 Votes (Like | Disagree)

ZipZilla
we know this about apple and lack of QA for OS updates. After 20 years of this, I just run a full version behind. sometimes I lose out on enjoying new features, but avoid problems like this
Score: 22 Votes (Like | Disagree)

KaliYoni
Has Apple software QA truly become abysmal over the last few years or have social media, blogs, and videos just made it easier to surface problems? For example, would the current Apple have released Copland?

Or maybe Zuckerberg Commandment™ #3, Keep Shipping, has somehow made its way into Apple.

Well, no matter the reason...:mad:
Score: 20 Votes (Like | Disagree)
Read All Comments