Apple is looking to expand CarPlay's functionality to include controls for core car functions such as the air conditioning system, radio, speedometer, seats, and more, according to a new report from Bloomberg. 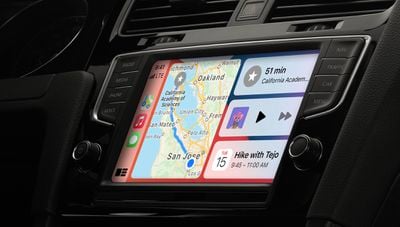 The project, internally codenamed "IronHeart," is still in its early stages but would include Apple working with carmakers to expand ‌CarPlay‌'s functionality to control core car functions. Beyond apps for music and navigation, ‌CarPlay‌ doesn't let users control any aspect of the car itself. This new iPhone-based project would be looking to change that.

The company is working on technology that would access functions like the climate-control system, speedometer, radio and seats, according to people with knowledge of the effort. The initiative, known as "IronHeart" internally, is still in its early stages and would require the cooperation of automakers.

IronHeart would take CarPlay a step further. The iPhone-based system could access a range of controls, sensors and settings, said the people, who asked not to be identified because the project is secret.

The report lists several different car functions that ‌CarPlay‌ could display in the future, including inside and outside temperature and humidity readings, seats and armrests, instrument cluster, and controls for the cars built-in speakers.

Bloomberg says Apple's ‌CarPlay‌ strategy is similar to that of its Home and Health offerings, where the company has consolidated users' information into single apps on their iPhone. With "IronHeart," ‌CarPlay‌ would be a more comprehensive system for users to control their vehicle without having to switch between ‌CarPlay‌ and the car's control system.

Ultimately, while Apple is rumored to be building its own car, ‌CarPlay‌ and any of its plans would require the cooperation of carmakers. As today's report notes, Apple has struggled to convince some carmakers to adopt certain features of ‌CarPlay‌ into their vehicles.

IronHeart would represent Apple's strongest push into cars since CarPlay was released in 2014, but it may not be a hit with automakers. They could be reluctant to hand over control of key features to Apple. While CarPlay is now in more than 600 car models, other Apple initiatives launched in recent years have been slower to catch on with automakers.

But automakers have mostly balked at adding these enhancements. The climate control and radio apps are only supported by a few cars. And the EV routing feature isn't available on any vehicles that are currently shipping. The CarPlay display expansion is only supported by a few brands, such as BMW and Volkswagen, and CarKey is just on some BMWs.

Apple recently tapped Kevin Lynch, who was previously an important part of developing watchOS, to lead the Apple Car team, but following several departures, doubts are starting to arise about whether Apple will ever release its own vehicle.

haruhiko
Hey Siri please lower the temperature.
Siri: I’ve found the following about lover in the temple on the web. Do you want me to read them out?
Score: 30 Votes (Like | Disagree)

Kylo83
For a start just have the caller ui not take up the whole screen and ruin the sat nav
Score: 20 Votes (Like | Disagree)

4jasontv
I’m surprised the EU hasn’t required that all cars support CarPlay and Android auto. The auto manufacture has a monopoly with the onboard infotainment system.
Score: 17 Votes (Like | Disagree)

That's all well and good, I just wish it was wireless in my Tucson.

You think you do, and I thought so, too.. but it’s eating the battery like c-r-a-z-y. For very short trips it’s ok. For long trips i always plug it in.
Score: 13 Votes (Like | Disagree)

Microsoft did this first with Ford in 2007. Ford Sync....
https://en.wikipedia.org/wiki/Ford_Sync

There are three huge issues with integrated infotainment.

2. It is rarely updated during a specific vehicles generation (often 5-7 years)

If you go out and buy a brand new car, the stereo is 3+ years old already. If it's the 3rd or 4th year of that generation, it's 7 years old. The saving grace of CarPlay is that at least the software stays up to date, because these manufacturers rarely meaningfully update their systems. Navigation especially. You get the privilege of paying for a once a year unreliable map update and by the time your car needs its first oil change (okay that's a tiny bit of an exaggeration but not much), they've already discontinued it and you can't even buy more updates.

CarPlay is a killer feature (even if it's imperfect in implementation) mostly because the device in your pocket is likely newer than the car you're driving, and it definitely has newer software. So adding to that the functionalities of the car itself means drivers don't have to use the OEM software for anything if they don't want to.
Score: 9 Votes (Like | Disagree)

Damian83
Whats the point of having functions i already have on the on-board infotainment? A cool idea will be a carplay connected to obd for real-time HP, Nm, g-meter etc.
Score: 7 Votes (Like | Disagree)
Read All Comments

Monday January 23, 2023 10:09 am PST by Juli Clover
Apple today released macOS Ventura 13.2, the second major update to the macOS Ventura operating system initially released in October. macOS Ventura 13.2 comes more than a month after macOS Ventura 13.1, an update that added the Freeform app and other changes. The ‌macOS Ventura‌ 13.2 update can be downloaded for free on all eligible Macs using the Software Update section of System...
Read Full Article • 126 comments