Perhaps inspired by macOS, the main Windows 11 screen features rounded corners on several interface elements including application windows, and in combination with a new theming system that combines specific wallpapers with colors, the overall design looks modern, with more depth and less clutter than Windows 10, which is now six years old.

In the clearest design change, the refreshed desktop moves the Start menu and taskbar, interface elements that are familiar to all Windows users, to the center of the screen, a location not dissimilar to where the Dock lives in macOS. 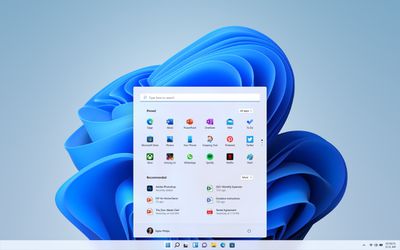 The taskbar includes shortcuts to Microsoft's Edge browser, widgets, Teams integration, and File Explorer. Meanwhile, gone are the Live Tiles in the Start menu, which has been stripped down for a cleaner, simpler look, and now houses links to apps and recently used files.

In the bottom-right corner of the screen, the new Action Center and System Tray sports a design reminiscent of the Control Center in the macOS menu bar, and is home to sound, display, Bluetooth, network controls, and pop-out notifications.

Another area where Windows 11 appears to have taken a leaf out of Apple's book is its approach to widgets. Where widgets on macOS slide in from the right side of the screen via Notification Center, Windows 11 has them sliding in from the left side, with a panel that includes weather and news widgets by default.

One of the most notable additions in this version of Windows is in the area of multitasking. Like in macOS with Spaces, users can create multiple virtual desktops for different sets of apps. In addition, a new Snap Assist feature appears when the mouse pointer hovers over the maximize button, and offers up several window layouts that app windows can snap to. These layouts are remembered by Windows and appear as Snap Groups in the taskbar.

Elsewhere, there's a new Microsoft app store featuring many new popular apps, and in a clear divergence from Apple, Microsoft also plans to host third-party stores in its Microsoft Store, including an Epic Games store, although there's no sign of the promised Android apps yet (Microsoft says it plans to preview them before the end of the year.)

Windows 11 will come pre-installed on newer PCs, and Microsoft is also offering the new operating system as an upgrade for Windows 10 users who have a machine that includes the necessary Trusted Platform Module (TPM). Macs powered by ‌Apple silicon do not support Windows and there is no Boot Camp feature like there is on Intel Macs, but support for Windows is a feature that many users would like to see, at least via virtualization software.

However, Microsoft recently dampened hopes that Windows will be able to work on Apple silicon, saying that running an Arm version of Windows 11 on M1 Macs, via virtualization or otherwise, is not "a supported scenario."

Lipstick on a pig

hortod1
Lipstick on a pig
Score: 31 Votes (Like | Disagree)

Well... to be honest... it's also "up to Apple", because if Apple decides to stop supporting users of professional applications such as Revit, Ansys, Robot Structural Analysis, CYPECAD, Catia, SolidWorks, Tekla Structures, and an endless list of professional engineering applications... then, well, you can say it's "up to Microsoft", but the thing is that Microsoft is not losing these customers. It's Apple who loses them.

emmab2006
the Sheer arrogance on this forum is ridiculous. MacOS is not the sacred OS, it has faults just like windows does. i Congratulate Microsoft on their reelase.
Score: 25 Votes (Like | Disagree)

a m u n
Microsoft does not want Windows to run on M1 because it is faster than on Surface laptops & other Windows laptops. ?
Score: 24 Votes (Like | Disagree)

BlindBandit
I wish MS would get it together. Why not support Windows on Mac. I'm thinking of picking up a new Macbook pro when they come out. I would gadly pay MS to use Windows on a mac!
Score: 16 Votes (Like | Disagree)
Read All Comments