Macs powered by ‌Apple silicon do not support Windows and there is no Boot Camp feature like there is on Intel Macs, but support for Windows is a feature that many users would like to see. 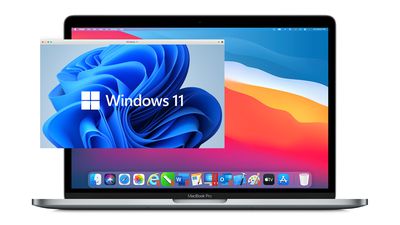 However, Microsoft has dampened hopes that Windows will ever work on Apple silicon, saying that running an Arm version of Windows 11 on M1 Macs, via virtualization or otherwise, is not "a supported scenario."

A Microsoft spokesperson made the comments to The Register on Friday, suggesting that neither native support for Apple silicon nor support through virtualization is something the software giant is considering for its Arm architectures.

Apple's ‌‌M1‌‌ chip is a custom Arm SoC, so it's not possible to install the x86 version of Windows or x86 Windows apps using Boot Camp, as was the case with previous Intel-based Macs.

However, in November 2020, shortly after Apple debuted its first ‌M1‌ Macs, a developer was able to virtualize the Arm version of Windows on Apple's ‌‌M1‌‌ chip with no emulation, igniting hopes that official support would be developed down the line.

In the meantime, users have been using Parallels virtualization software to run Insider builds of Windows 10 and Windows 11 developed for Arm hardware, but there are indications that this route may soon be no longer viable, either.

As noted by The Register, last week a Windows 11 Virtual Machine running on an ‌M1‌ Mac with Parallels Desktop 17 began throwing up a hardware compatibility error on an Insider build. Parallels has since released version 17.0.1 of its software, which seems to resolve the issue, allowing Windows 11 to again run on ‌M1‌ Macs, for now at least.

How Parallels has achieved this is unclear, and we have reached out to them for comment, including whether support is still a long-term goal. The company previously promised full support for Windows on Apple silicon when the operating system launches in October.

Apple's software engineering chief Craig Federighi last year said that Windows coming to ‌‌M1‌‌ Macs is "up to Microsoft." The ‌‌M1‌‌ chip contains the core technologies needed to run Windows, but Microsoft has to decide whether to license its Arm version of Windows to Mac users.

macOS Lynx
This article and the source article are both garbage.

The original website was encountering an error message in Parallels with the latest Dev build of W11A and so they reached out to Microsoft, who said they don’t support that scenario.

Nowhere did Microsoft ever say they have no plans to support Windows on ARM on M1/Parallels/VMware, or that Windows on ARM will never support M1, just that it’s not currently a supported scenario.
Score: 36 Votes (Like | Disagree)

They are just some random company with a market capitalization of $2.232 trillion. I’m sure there is more information about them on the web.
Score: 28 Votes (Like | Disagree)

jlc1978
Of course MS won't support Apple Silicon, they want you to subscribe to Windows in a cloud as the way to access Windows on non-Wintel machines.
Score: 26 Votes (Like | Disagree)

If you haven't migrated already from Windows tat then you need to seek help.

And if you think it's that easy, you need to leave your basement once in a while .....
Score: 16 Votes (Like | Disagree)

macsorcery
This is unfortunate. All the more reason to grab a Macbook Pro 16 if you want to game.
Score: 15 Votes (Like | Disagree)

What about Parallels 17 and Win11? Final release won't work?

It most likely will. There’s a bug with W11A and Parallels on M1 right now, which is the entire basis of this original article, and the author decided that Microsoft saying “we currently don’t support this” = “we will never support this”, even though the bug is also something the Parallels team could fix.

don’t worry, it’ll work in the future, people are just jumping to conclusions way too fast.
Score: 11 Votes (Like | Disagree)
Read All Comments

Monday November 22, 2021 12:56 pm PST by Juli Clover
Microsoft has declined to make a version of Windows 11 available for Apple's M1, M1 Pro, and M1 Max Macs that are built on an Arm architecture, and now we may know the reason - a secret exclusivity deal with Qualcomm. Subscribe to the MacRumors YouTube channel for more videos. According to XDA-Developers, Arm-based Windows has only been made available on devices with Qualcomm SoC's because of ...
Read Full Article • 321 comments

Thursday September 9, 2021 7:51 am PDT by Joe Rossignol
VMware Fusion is now available as a private tech preview for M1 Macs, with users able to request access through an online form. A public tech preview will follow in around two weeks, according to a tweet from VMware Fusion manager Michael Roy. VMware Fusion for M1 Macs will be quite limited in scope, with a focus on virtualizing Arm-based Linux distributions. VMware Fusion will not...
Read Full Article • 172 comments