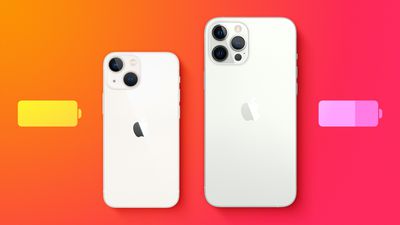 Though there are battery life improvements during virtually all tasks, streaming video performance is where the iPhone 13 lineup's battery life boost is most apparent:

The iPhone 13 models feature a more efficient A15 chip and larger batteries, with less power-hungry ProMotion displays on the "Pro" models, which makes for dramatic battery life improvements. With video streaming services now being so ubiquitous, not to mention the importance of Apple TV+ and Apple Fitness+, Apple has clearly factored streaming computations into the iPhone 13's power optimizations that it has achieved through the tight integration of its hardware and software.

For example, Apple claims that when streaming video, the iPhone 13 Pro and Pro Max last nine hours and 13 hours longer than last year's equivalent models, respectively. Taking the same metric, the battery in the iPhone 13 mini manages 13 hours, which is even longer than the iPhone 12 Pro Max.

In real-world continuous usage tests, the iPhone 13 mini surpasses the iPhone 12 by over an hour and a half, with an even bigger four-hour boost on the iPhone 13 Pro Max. Of course, battery life varies by use case and many other factors, so actual real-world results will vary, but the improvements are sure to be a major benefit to avid streamers in particular.

Even with the iPhone 13 mini's battery life improvements, the smallest iPhone is still limited to a lower 12-watt peak when charging via MagSafe, likely due to thermal constraints.

Friday December 2, 2022 10:54 am PST by Juli Clover
Google is continuing on with its attempt to convince Apple to adopt the RCS messaging standard, publishing a new "it's time for RCS" blog post. Promoted heavily by Google, RCS or Rich Communication Services is a messaging standard that is designed to replace the current SMS messaging standard. It provides support for higher resolution photos and videos, audio messages, and bigger file sizes, ...
Read Full Article • 613 comments

Monday December 5, 2022 11:44 am PST by Juli Clover
Due to production issues at Apple supplier factories in China, the iPhone 14 Pro and iPhone 14 Pro Max are backordered and basically out of stock at every store. If you were planning to gift or receive an iPhone 14 Pro model for the holidays and didn't already get one, you're basically out of luck because they're gone until late December. Subscribe to the MacRumors YouTube channel for more ...
Read Full Article • 125 comments