Last year, Apple debuted support for digital car keys, which let users lock, unlock, and start their vehicles using a pass stored in the Wallet app on the iPhone. And with iOS 15, there's now Ultra Wideband support on the ‌iPhone‌ 11 and later that will let the feature work without having to remove your ‌iPhone‌ from your pocket. 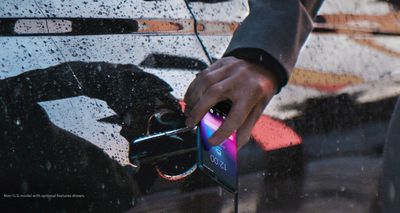 Car manufacturers need to add the NFC technology to their vehicles to support digital car keys, and so far BMW has been the only manufacturer to do so with Apple's platforms.

It appears as if that's about to change, however, as an Apple configuration file specifying various compatibility criteria for Apple Pay NFC functionality has been updated today to add mention of Hyundai's luxury brand Genesis.

We noted earlier this year that BMW was preparing to support the Ultra Wideband version of Apple's digital car key feature and that Hyundai was reportedly moving to adopt digital car keys on ‌iPhone‌ as well, and that now appears to be coming to fruition.

We've yet to see an official announcement from Hyundai or Genesis about launching digital car key support on iOS, but the manufacturer debuted the feature on Android with its 2021 GV80 and G80 models and indicated that it was working with Apple on iOS support.

You don't have to "use the phone" to unlock the car. It behaves the same way a passive entry key fob does; walk up to the car it unlocks, walk away it locks. I've been doing it since 2018.

Solving a problem doesn't have to be the only reason for technology to exist. Plenty of things have been invented simply for convenience.

A single device we're carrying has already replaced cameras, music players, computers, wallets, notepads, maps, books, newspapers, boarding passes, etc. None of those were a problem before that but it's much more convenient to carry an iPhone than all that stuff. There's no reason not to add car keys, house keys, and building access cards to that list if it can be done effectively and securely.
Score: 13 Votes (Like | Disagree)

It's a major improvement for me.

1. No need to carry around a key, it's also easier to find a lost iPhone or Apple Watch than a physical car key. The cost of replacing a lost cary key can be a lot. Say I irretrievably lose my iPhone, I can wipe it and replace it (and thus the digital key) easier than replacing a physical key.
2. Not needing to carry a key is great for when I go to the beach, gym, etc.
3. Having to carry round a car key seems archaic to me and something that can be easily replaced with a phone. What if I need to lend my car to a friend? I can easily send him a digital key for a time.

You've not really thought through the advantages it brings.
Score: 6 Votes (Like | Disagree)

More like Genesis is starting to prep support for Apple's Digital Car Keys.

Phil Collins is hard at work on that.
Score: 5 Votes (Like | Disagree)

Another solution to a problem that did not exist.

I completely stopped carrying keys around when I got my Tesla. My phone is the key. The backup keycard, for the rare occasion where my phone dies, is in my phone case.

It's nice to not have keys anymore.

I guess the one small improvement that could be made would be if my Apple Watch also acted as a key unlocking the car. Does Apple's implementation allow that?
Score: 5 Votes (Like | Disagree)

"...without having to remove your iPhone from your pocket."

- shows photo of an iPhone literally against the door handle

Oh wow! I was so baffled by the image of placing a phone against a wet car... that I didn't even notice that!

Especially since the whole point of this is to not grab your phone!