Apple's biggest product introduction is right around the corner, with an Apple event now officially announced for next Tuesday, September 14! We're continuing to see a flurry of rumors about not only the iPhone 13 and Apple Watch Series 7 that we're expecting to see at the event, but also the iPhone 14 that's a whole year away. 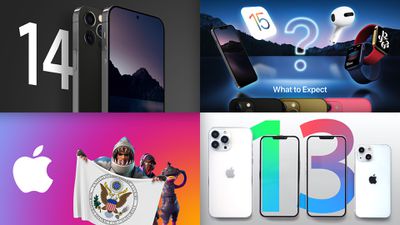 The other major piece of news this week was that a decision was finally handed down in the blockbuster Epic Games v. Apple trial. It was a mixed verdict with Apple winning on nine of the ten counts but the sole Epic victory meaning that U.S. developers would be able to link to alternative payment systems in their apps. But stay tuned, because this dispute isn't over yet.

It's official! Apple has announced that its next event will take place on Tuesday, September 14 at 10 a.m. Pacific Time, with a video stream to be available on Apple's website and on YouTube.

Apple is widely expected to unveil the iPhone 13 and Apple Watch Series 7 at the event, and third-generation AirPods may also be announced, so be sure to check our full overview of what to expect.

In addition to hardware, Apple is also likely to share release dates for iOS 15, iPadOS 15, watchOS 8, and tvOS 15 during or immediately after the event.

A decision was reached this week in the high-profile Epic Games v. Apple trial, with U.S. District Judge Yvonne Gonzalez Rogers ruling that Apple's anti-steering conduct is anti-competitive, and ruling in favor of Apple on all other counts.

Rogers' ruling would allow U.S. developers to link out to alternative payment systems rather than being limited Apple's in-app purchasing system, but the dispute is by no means over, as Epic has said it plans to appeal at least some portions of the ruling that went in favor of Apple while Apple is still considering its next steps.

Just days ahead of the Apple Event, last-minute rumors have emerged about the iPhone 13, Apple Watch Series 7, and third-generation AirPods, and we've rounded up all of the details right here.

Another rumor that resurfaced this week claims that iPhone 13 Pro and iPhone 13 Pro Max models will be available in new Matte Black and Bronze color options, replacing the current Graphite and Pacific Blue finishes. We could also see a new Pink color for the iPhone 13 and iPhone 13 mini.

iPhone 14 Rumored to Have No Notch, No Camera Bump, Titanium Design, and More

Back in March, analyst Ming-Chi Kuo claimed that at least some iPhone 14 models will abandon the notch in favor of a hole-punch front camera, and leaker Jon Prosser has now reiterated this rumor.

Prosser also claimed that the iPhone 14 Pro Max will have a thicker chassis that eliminates the rear camera bump, a titanium frame, round volume buttons, redesigned speaker and microphone grilles, and a Lightning connector.

To facilitate the removal of the notch, display industry analyst Ross Young said Apple plans to move the Face ID sensors under the display on iPhone 14 Pro models, although he said the feature has not been finalized yet, so the plans could change.

With the Apple Watch Series 7 expected to be announced next week, now is a great time to catch up on everything we've heard about the device.

Apple Watch Series 7 models will reportedly be available in limited quantities at launch, likely due to ongoing supply chain component shortages and manufacturing challenges that arose from the Series 7's new design with larger display sizes and a flat-edged casing. Those challenges have reportedly been addressed, so hopefully, any delays or shortages will be short-lived.

It's just so much faster than FaceId. The older I get, the less I care about some of the "advanced features." I just want something very fast and convenient.
Score: 6 Votes (Like | Disagree)

It's just so much faster than FaceId. The older I get, the less I care about some of the "advanced features." I just want something very fast and convenient.

IllinoisCorn
Man, I miss TouchID. Not enough to go back to a sub 5 inch phone, but if they released as SE in a Plus size? Would strongly consider it
Score: 3 Votes (Like | Disagree)

Man, I miss TouchID. Not enough to go back to a sub 5 inch phone, but if they released as SE in a Plus size? Would strongly consider it

Apple should release TouchID as a standalone product so that people who like it so much could put it on anything
Score: 2 Votes (Like | Disagree)

popdan
if 13 doesn't have touch ID i will wait for 14. i really want let my 6s go... but the touch ID is something I cannot give up
Score: 2 Votes (Like | Disagree)

TheYayAreaLiving ?
It seems like we pretty much know everything about the iPhone and Apple Watch. Let’s see how true the rumors are.
Score: 2 Votes (Like | Disagree)
Read All Comments