It's no secret that Apple and Google have a considerable monetary agreement that ensures Google's position as the default search engine on Apple's devices. In a new investor note by financial advisor Bernstein's Toni Sacconaghi, the analyst claims Google's payment to Apple to maintain the status quo could reach $15 billion in 2021, up from $10 billion last year. 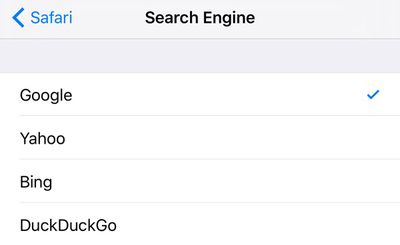 First reported by Ped30, Sacconaghi's note estimates that Google's payments to Apple could continue increasing on-year and approach $18-20 billion in 2022. The Bernstein analyst bases his numbers on Apple's public filings as well as a bottom-up analysis of Google's traffic acquisition costs.

Google's agreement with Apple in the search and advertising markets has been in place for over a decade, but with Google's search engine dominance coming under increasing scrutiny in recent years, Bernstein analysts believe the agreement could face a regulatory risk.

In addition, Yahoo and Microsoft have both been interested in inking a deal with Apple to overthrow Google as the default search engine on iOS devices, and the analysts suggest Google's huge payments to Apple are made to ensure Microsoft doesn't outbid it.

We see two potential risks to GOOG’s payments to AAPL: (1) regulatory risk, which we believe is real, but likely years away; we see a potential 4-5% impact to Apple’s gross profits from an adverse ruling; & (2) that Google chooses to stop paying Apple to be the default search engine altogether, or looks to renegotiate terms and pay less. We have noted in prior research that GOOG is likely paying to ensure Microsoft doesn’t outbid it. That said, with payments likely to approach $18 – $20B in FY 22, it not implausible that Google could revisit its strategy.

Last year, the U.S. Justice Department filed an antitrust lawsuit against Google, claiming the Mountain View-based company has used anticompetitive and exclusionary practices in the search and advertising markets to maintain an unlawful monopoly. One of the main complaints against Google is its deal with Apple that allows Google to be the default search engine on Apple's Safari browser and other search tools.

Last year, Sacconaghi argued Apple should purchase a search engine outright to put pressure on Google. Sacconaghi's reasoning was that Apple doesn't have many alternatives to Google, with its only leverage being a swap to Bing. However, the analyst also warned that such a move could trigger regulatory oversight that could ultimately block the acquisition, putting Apple in a worse position than before.

Speculation mounted in 2020 that Apple was planning to launch its own search engine, after increased activity was noted from its web crawler, but the uptick was later put down to Apple's efforts to improve Siri and Spotlight search results, and the rumor has so far come to nothing.

Agit21
Switched to DuckDuckGo and couldn’t be happier.
Score: 36 Votes (Like | Disagree)

TheAustrianGuy
As much as I hate Google and especially their business model, its search engine is the only usable one.
Save your money, people will switch to Google search anyway.

I tried Bing, I really tried DuckDuckGo.
It was only one thing: Frustrating.
Score: 25 Votes (Like | Disagree)

Speculation mounted in 2020 that Apple was planning to launch its own search engine ('https://www.macrumors.com/2020/08/27/apple-search-engine-speculation/'), after increased activity was noted from its web crawler, but the uptick was later put down to Apple's efforts to improve Siri and Spotlight search results, and the rumor has so far come to nothing.

If we judge by the way Apple music handles search then it's better that they didn't build a search engine after all!
Score: 19 Votes (Like | Disagree)

sinoka56
$15 Billion is the price Apple accepts to sell users' search privacy (of those that don't use other search engines).
Score: 13 Votes (Like | Disagree)

duanepatrick
It could be the default but I will still stick to Brave browser and duckduckgo as my search engine. :cool:
Score: 12 Votes (Like | Disagree)
Read All Comments