Apple should purchase a search engine to put pressure on Google, Bernstein analyst Toni Sacconaghi said Monday in a research report that was shared by Barron's. 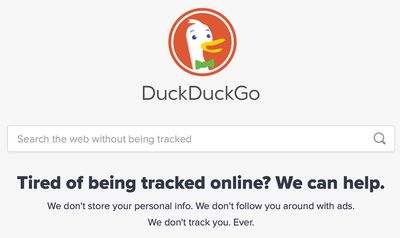 Apple and Google don't share details on the amount of money that Google pays to be the default search engine for iOS and Siri, but Sacconaghi estimates that it's around $7 to $8 billion per year, or 30 percent of the estimated $25 billion that Google generates in ad revenue from search on Apple devices.

Google has long paid Apple to prevent Apple from turning to other search engine options like Microsoft's Bing, but Sacconaghi believes that Google has the upper hand in business dealings because it could opt to end its Apple deal if it can convince 70 percent of iOS users to go to Google.com for searching even if it's not the default Safari option.

Apple doesn't have many alternatives to Google, with its only leverage being a swap to Bing, so Sacconaghi suggests that Apple should acquire its own search engine.

"Yes, Google is clearly the dominant force in search today. However, we suspect the company's fear of 'rocking the boat'--which could compromise $15 billion in profits it captures today from iOS--may ultimately limit its freedom of action with Apple. Conversely, Apple may be in a stronger position than at first glance, given it controls the keys to the kingdom on who can monetize iOS search. However, it remains uncomfortably dependent on Bing to act as a counterweight to Google--hence our suggestion that Apple acquire its own search engine."

As for which search engine, Sacconaghi thinks that DuckDuckGo, a privacy-focused search engine option, would be a good choice for Apple. Apple could, he speculates, buy it for under $1 billion, giving Apple a solid backup option that does not rely on Google or Microsoft.

"To be certain, we doubt an Apple-owned DuckDuckGo could ever generate profits sufficient to make back the $7 billion to $8 billion a year currently paid by Google. Nevertheless, Apple would still likely be better off than a worst-case scenario where it had no backup, and Google or Microsoft (one or the other) withdrew from the bidding process altogether."

DuckDuckGo would also be compatible with Apple's privacy values, offering iOS users a search option that is free from invasive ad tracking.

Sacconaghi warns that if Apple did attempt to purchase a search engine like DuckDuckGo, it could trigger regulatory oversight that could ultimately block the acquisition, putting Apple in a worse position than before. DuckDuckGo is also reliant on Bing, so Apple would need to make changes to be completely free of Microsoft's influence.

Apple previously used Bing for ‌Siri‌ and Spotlight on Mac and iOS, but in 2017 swapped over to Google for consistency across iOS and Mac devices. Apple has not been rumored to be seeking to make a search engine acquisition.

icanhazmac
I've been using DDG exclusively for a few years now and have zero complains about their search returns. Don't really trust anything google anymore.
Score: 42 Votes (Like | Disagree)

I use DDG for most routine stuff, however, it you really need to find something obscure, DDG does not cut it.

sadly that is my experience as well. good enough most of the time though, and you aren’t letting the evil crew at google know what you are up to.
Score: 23 Votes (Like | Disagree)

nt5672
I use DDG for most routine stuff, however, it you really need to find something obscure, DDG does not cut it.
Score: 23 Votes (Like | Disagree)

avtella
I tried DuckDuckGo and Bing with a pretty open mind, they were unfortunately both pretty terrible if you do anything more than very simple searches. From searching on computer issues and coding all the way to things like research articles; simply typing or pasting parts of a reference article or title gives excellent results in Google but DuckDuckGo and Bing usually gave results that were no where near what I needed and at times results were let’s just say pretty out there. All that data collection is basically why Google usually gives better results.

In my experience searching for maybe a famous person or an animal I’d probably not notice a difference between the three but get into some hard searches ie research/science concepts/phrases or sections of articles and books etc, and Google is the only one that consistently gives proper results for me. With the Bing and DuckDuckGo I ended up wasting a lot more time scrolling through a few pages just get one or two proper results.
Score: 15 Votes (Like | Disagree)

To do that, DuckDuckGo gets its results from over four hundred sources. These include hundreds of vertical sources delivering niche Instant Answers, DuckDuckBot (our crawler) and crowd-sourced sites (like Wikipedia, stored in our answer indexes). We also of course have more traditional links in the search results, which we also source from multiple partners, though most commonly from Bing (and none from Google).