Netflix earlier this year confirmed plans to get into mobile gaming, and now the company is testing its gaming experience with Netflix users in Poland. 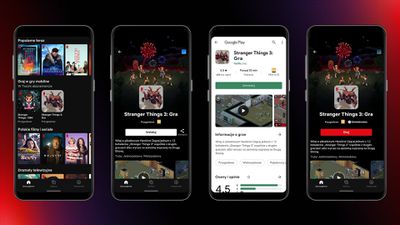 According to NetflixGeeked, the games are included with a Netflix membership and feature no ads or in-app purchases, similar to how Apple Arcade works. The games are downloaded directly to a mobile device from Netflix and are not streamed from the Netflix app.

As noted by CNET, the games that are being offered have been available for a few years outside of the Netflix app and were created in partnership with Netflix for the second and third seasons of "Stranger Things."

Back in July, Netflix said that it considered gaming to be another new content category, similar to its expansion into original films, animation, and unscripted television.

With its expansion into mobile gaming, Netflix will compete directly with ‌Apple Arcade‌, Apple's $4.99 per month gaming service that allows users to access hundreds of ad-free games on the iPhone, iPad, Mac, and Apple TV.

Given that the two games Netflix is experimenting with are already existing titles, we may need to wait for some time to see where Netflix plans to take its mobile gaming feature in the future.

contacos
Will Apple even allow this or will they demand a copy of each game to review it?
Score: 2 Votes (Like | Disagree)

It’s a tough job being Apple nowadays. Everyone wants a scoop of their ice cream ?.
Score: 2 Votes (Like | Disagree)

svish
Good that users will not have to pay anything extra to get access
Score: 1 Votes (Like | Disagree)

Appleman3546
It should be interesting to see if Netflix allows this for iOS users there too, given Apple’s stance
Score: 1 Votes (Like | Disagree)