An image purporting to show a "45mm" Apple Watch band has surfaced online ahead of the expected unveiling of Apple Watch Series 7 models next month. 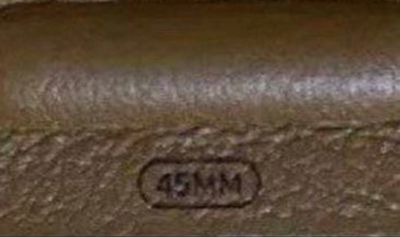 The small, low-resolution image, shared by "DuanRui" on Twitter, originated from the Chinese social media network Weibo and appears to show the underside of an Apple Watch band, which could be a Saddle Brown Leather Link band. While it is not clear how reliable this image may be, the 45mm sizing lines up with a number of previous rumors around the Apple Watch Series 7.

Alleged CAD renders of the larger Apple Watch Series 7 suggested that it would sport a 45mm display, a 1mm increase from the current 44mm display on the larger Apple Watch Series 6 model. This is expected to be achieved by making the casing's edges flat, which would slightly increase the top surface area of the device for the display, and by reducing the size of the display's bezels.

Another report from the Chinese leaker known as "UnclePan" suggested that the Apple Watch Series 7 will come in larger 41mm and 45mm case sizes, replacing the current 40mm and 44mm options.

CAD renders and renders supposedly based on leaked images have also indicated that the Apple Watch Series 7 will carry over the same mechanical band system. Though the device's display is expected to increase in size by 1mm and the edges are expected to be flat like the iPhone 12 lineup, the height and width of the new models are expected to be the same as previous models, allowing for compatibility with the same Apple Watch bands. The only dimension anticipated to change significantly is the thickness, with new models purportedly set to be 1.7mm thinner than the current Series 6.

The Apple Watch Series 7, featuring a number of improvements such as slimmer bezels, upgraded Ultra Wideband connectivity, and a faster chip, is likely to arrive alongside the iPhone 13 lineup at a digital event next month.

Update: An image of a second alleged Apple Watch Series 7 band has now been shared online. This blue Braided Solo Loop, seemingly with an identical design to previous versions, is for a 41mm Apple Watch model, indicating that previous rumors around the smaller devices also getting a 1mm display size increase may have been correct.

According to my source, Apple has started mass production of the new Apple Watch Series 7 bands. The size mentioned are 41 and 45mm which should be identical in size to the previous models #Apple #AppleInternal pic.twitter.com/cadcaCK324 — Majin Bu (@MajinBuOfficial) August 26, 2021

himanshumodi
The furor if the old bands don't fit this watch will be spectacle worth witnessing!
Score: 17 Votes (Like | Disagree)

alpi123
Of course it's gotta be a super low-quality image lol
Score: 12 Votes (Like | Disagree)

HeavenDynamic
So the smallest Apple Watch will now be closer in size to the first biggest Apple Watch.
Score: 10 Votes (Like | Disagree)

The furor if the old bands don't fit this watch will be spectacle worth witnessing!

They will. When the case sizes increased to 40 and 44 mm, the band sizes didn’t change, but the new case sizes were reflected on bands from that point on.

Rychiar
Why is this stated on the band if the old bands fit?
Score: 9 Votes (Like | Disagree)

How many saving accounts will I need to empty this time?

Two should suffice.
Score: 9 Votes (Like | Disagree)
Read All Comments