While much of the rumor mill remains focused on the imminent debut of the iPhone 13 lineup in just about a month, many Mac fans have been holding out for the redesigned MacBook Pro models. A new report says they've finally entered mass production, so keep your fingers crossed that they're coming soon. 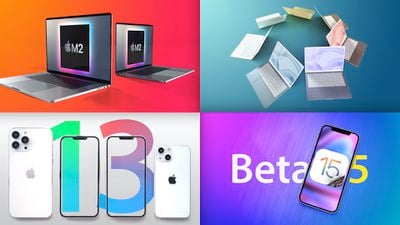 Other news this week included rumors about a redesigned MacBook Air coming next year, a fresh round of operating system betas that saw Apple continuing to make tweaks, and additional fallout from Apple's child safety measures announced last week, so read on below for details on all of these stories!

After months of rumors about redesigned 14-inch and 16-inch MacBook Pro models with Apple silicon, a report this week claimed that the notebooks have finally entered mass production. We've rounded up everything to expect from the new MacBook Pro models, which are expected to launch later this year as part of Apple's busy fall season.

Apple is also expected to launch its iPhone 13 models this fall, followed by a redesigned MacBook Air next year, and we've rounded up the latest rumors about those devices and other top stories below.

Following the release of the MacBook Air with an M1 chip in November 2020, rumors suggest Apple is planning another update to the notebook with an even faster Apple silicon chip for release next year.

The details came from reputable analyst Ming-Chi Kuo, who in a research note this week claimed the new MacBook Air will feature a mini-LED display and come in several new color options like the new 24-inch iMac.

We're likely around a month away from Apple unveiling its next-generation iPhone 13 lineup, and we continue to learn more about potential features.

According to Bloomberg's Mark Gurman, the upcoming iPhones will have new software features like ProRes for videos and Portrait Mode videos, while research firm TrendForce said the devices will have larger batteries, mmWave 5G support in additional countries, and more.

Speaking of that iPhone 13 introduction, we've put together an overview of what we might be able to expect as far as upcoming Apple media events. We're expecting the iPhone introduction to return to its usual early-mid September timeframe, and we're likely to also see the Apple Watch Series 7 and potentially updated AirPods at this event.

We're likely to see at least one other event before the end of the year to introduce the new MacBook Pro models and perhaps a few other products. Based on Apple's usual timing and one rumor, late October seems to be the most likely window for this event.

Everything New in iOS 15 Beta 5

Apple seeded the fifth betas of iOS 15 and iPadOS 15 to developers and public testers this week, and as usual, we've rounded up all of the new features and changes. We have also shared a video of everything new on our YouTube channel.

Last week, Apple previewed new child safety features that it said will be coming to the iPhone, iPad, and Mac with software updates later this year, including the ability for Apple to detect known Child Sexual Abuse Material (CSAM) images stored in iCloud Photos.

The planned child safety features have been quite controversial, including among Apple's own employees, and in an attempt to address concerns, Apple has published a detailed FAQ with more information. Apple executive Craig Federighi has also spoken up to address some of the confusion around the issue.

Flight Plan
Wait a minute...who else here is having the same deja vu feeling like me? Didn't we just read this article about a week ago, and didn't YayAereaLiving pose exactly her same response to that prior article?

Seems weird, given the conversation currently going on with Apple's security news in that other thread.

Normally, I'd be all in with Yay's sentiment, but I'm not so sure now, specifically for that tiny nagging security thing...
Score: 5 Votes (Like | Disagree)

Weirdo like me who wants this weird combo of touch bar and updated keyboard would like it, since it is confirmed no touch bar will be present in the upcoming MacBook Pro lineup.

I had the 2016 touch bar, and for me there was no benefit, in contrary, the lost of decent F-Keys was heavy because i’m a terminal diver.
Score: 2 Votes (Like | Disagree)

Shirasaki
Whelp. So the current M1 MacBook Pro strikes a weird balance of having only 2 USB-C ports, with a Touch Bar and with scissor keyboard. Maybe Apple never released lower end MacBook Pro with more than 2 USB ports.

The next MacBook Pro refresh will be very interesting to me as I love more ports but have a mixed feeling about Touch Bar. Maybe it did not receive enough love back in the day.

iPhone release won’t attract me much it seems as it has been rumoured to be a very minor update overall. There’s not enough compelling reason for me to ditch iPhone XS Max I have in favour of the new iPhone.
Score: 2 Votes (Like | Disagree)

Top story in first order is Apples new problem with privacy (>2930 comments since Tuesday).
Why should Chinese still buy expensive iPhones now?
I will be watching the stock market closely. Of course, analysts need time first, so I am still quiet for today.

I observed yesterday afternoon searching google news against world, US, business, and tech articles there was no discussion of that topic at all. Yes there are some sites still discussing this if you specifically searched, but it’s already gone from all the main news groups so the chances of it effecting business decisions seems remote.
Score: 1 Votes (Like | Disagree)

Whelp. So the current M1 MacBook Pro strikes a weird balance of having only 2 USB-C ports, with a Touch Bar and with scissor keyboard. Maybe Apple never released lower end MacBook Pro with more than 2 USB ports.

The next MacBook Pro refresh will be very interesting to me as I love more ports but have a mixed feeling about Touch Bar. Maybe it did not receive enough love back in the day.

iPhone release won’t attract me much it seems as it has been rumoured to be a very minor update overall. There’s not enough compelling reason for me to ditch iPhone XS Max I have in favour of the new iPhone.